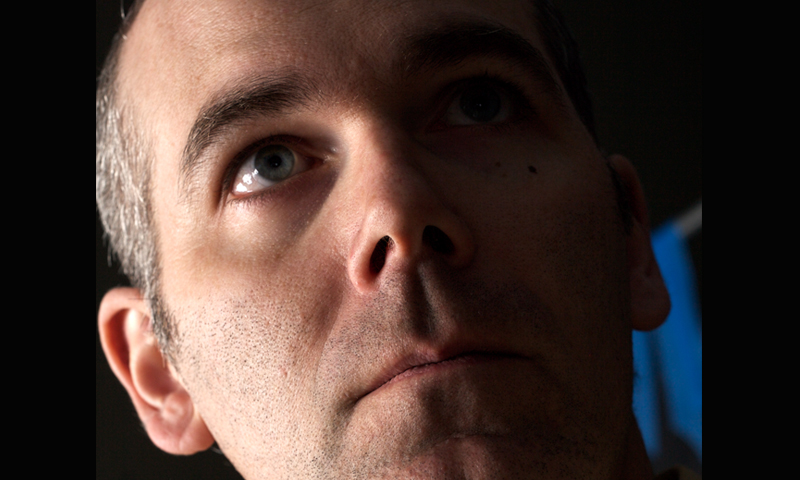 The work of painter Fletcher Booth forces the viewer to stand back. In an array of larger-than-life studies depicting cops, bikers, bouncers and marines (figures which Booth just calls “men”). Booth reveals himself as a natural draughtsman who has no fear of occasionally sacrificing his impressive skills. He is ready and willing to disfigure his own talent for the sake of immediate impact. “I want [my paintings] to have the scale and monolithic power of a monument,” says Booth, “the kind of impact I felt as a kid looking up at painted walls and murals.”

Popularity and professional success are nothing to Booth. He strives to maintain his authenticity in a culture overrun by poseurs with bad haircuts. “I think a lot of superficial and artificial people go into the arts,” says Booth. “ But just because people make art doesn’t mean anything. I don’t really like artists.” If art today has become little more than building up a clientele, than Booth opts out. “I’d rather make artifacts,” by which he means objects which attract or repel, push and pull, do something other than just hang around and look good.

Through a variety of dragged and dry-brushed browns and grays, Booth gives his images the look of soot, tar and engine grease rubbed onto tarps or into faded jeans. They recall the soiled workman’s uniforms worn by the mechanics in his family. This effect is especially striking in his renderings of men and machines. In a painting of this type—a grease-monkey shroud of Turin—images begin to bond with reality.

Booth shows a rare ability to reinvest images with their primitive power to command, to arrest or repel an audience. Here the body is not mere sign but takes on the status of shouting voice. These works drill the viewer out of the critic’s comfortable state of detachment. Booth, who before moving to Utah studied art in the state of Kansas, turned to art precisely because it required “no math or foreign languages.” He rebels against any genteel appreciation of art, or the cultivated reading of images. Refined sentiments yield, in Booth’s work, to visceral impact.

Fletcher Booth currently teaches art at Weber State University. He paints in acrylic on unstretched canvas. In his off hours he works and drinks at Bonnevillains Speed and Custom.