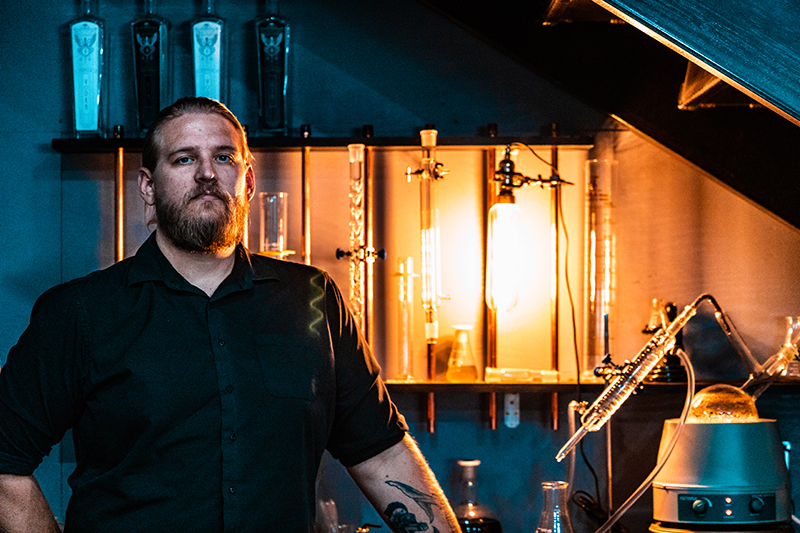 Holystone Distilling is the first distillery in the city of Murray. Although they’re currently only open on weekends, Head Distiller Ethan Miller and Co-owner Mike DeShazo sat down with me to talk about what they have in store for their grand opening at the end of October. Miller and DeShazo, along with other co-owner Barbie Busch DeShazo, currently offer both their Perla Vodka and Navy Strength Gin as bottles to go. They plan “to offer a unique experience,” Miller says. “It’ll be … elegant [and] more immersive.”

As far as the vibe goes, DeShazo describes it as “more like a speakeasy feel.” The team expresses no shortage of vision to turn the space into a 1920s cruise ship, which is coming together through the interior design work of Bucsch DeShazo and Miller, the latter of whom painted the octopus on the floor of the front room and also built the shelves.

“Once you walk through that door, it’s gonna be like you’re in a different time and place,” Miller says, pointing out the 500-pound ship door they plan to weld into place. “It’s almost just as much an art installation as it is a distillery,” explains Miller regarding his hopes for the space. DeShazo adds that he feels it will be “completely different” from any offering found in Utah. However, the two made clear that the intriguing and unique design is not just smoke and mirrors to hide poor liquor—the focus is still on distilling good spirits.

“One of our focuses is to bring some Utah firsts … some products that people haven’t experienced here but maybe have in a different part of the world.”

Holystone Distilling was coming out of the gate running this past May after winning SLUG Mag’s Brewstillery audience award for their cocktail using their Perla Vodka and SLUG-bestowed recognition for excellence in local spirits with their Navy Strength Gin. Holystone Distilling’s award record doesn’t end there. They just won four more awards from the John Barleycorn Awards for both their vodka and gin as well as both label designs. Miller creates the labels with Dan Hammond, who “helps make it real,” Miller says. Local bartenders are also already using Holystone products to “make specialty cocktails and … to win contests and showcase their talents, that has been the exciting thing,” DeShazo says.

Miller and DeShazo have as clear of a vision for their spirits as they do for their storefront space. Miller says, “One of our focuses is to bring some Utah firsts … some products that people haven’t experienced here but maybe have in a different part of the world.”

The team at Holystone Distilling has already succeeded in this respect with their first two products. Their vodka is the first grape vodka to be made in Utah, while their Navy Strength Gin, which is 114 proof, is the strongest gin—or “the best gin,” as DeShazo would argue—that you can get in Utah. However, don’t assume that just because it’s strong that they are unconcerned with the taste. “All you need is a few herbs with the right balance to make it good. We don’t just throw a bunch of different stuff in there,” DeShazo says during my tasting of the gin. Concerning the end result of how a spirit tastes, Miller compares their judicious approach to their use of ingredients to “whether you’d rather look at a Picasso or a Pollock,” he says. The two aren’t wrong. Even with the 114 proof strength of the gin, I got a strong rosemary taste with a bit of orange.

“All you need is a few herbs with the right balance to make it good. We don’t just throw a bunch of different stuff in there.”

Already looking to the future, Miller is developing an absinthe—another Utah first—brewing in the lab while we talk, leaving a licorice scent in the air. “There’s a lot of myth and legend behind absinthe—some of it’s true; some of it’s not,” Miller says. “American absinthe has kind of turned into this one thing that’s completely different than what most of the world expects … The challenge is coming up with a recipe that fits the market but is still true to the classic recipes.” Freshly back from an absinthe tasting the prior weekend, Miller has been looking at 100 plus-year-old French recipes to try and figure out the perfect concoction for Holystone Distilling to provide.

“Our other big thing we’re going to focus on is malt whiskey, but that’ll be going on in the background for years,” DeShazo says. Miller currently has full-sized whiskey barrels left over from his days at High West sitting in the back, ready to be filled. “We’re going to do a wide variety and pick our favorites … and hopefully, other people will like it, too,” Miller says with a chuckle. The two also have tentative plans to create a barley shochu sometime in the future, but no concrete plans have been laid as of yet.

You can find Holystone Distilling at SLUG Mag’s Boo!stillery on Friday, Oct 18, at The Union Event Center. Otherwise, visit Holystone Distilling down in Murray on the weekends, or find their vodka and gin at a dozen local liquor stores, as well as local restaurants and bars such as HSL, Post Office Place, Lake Effect and many more.