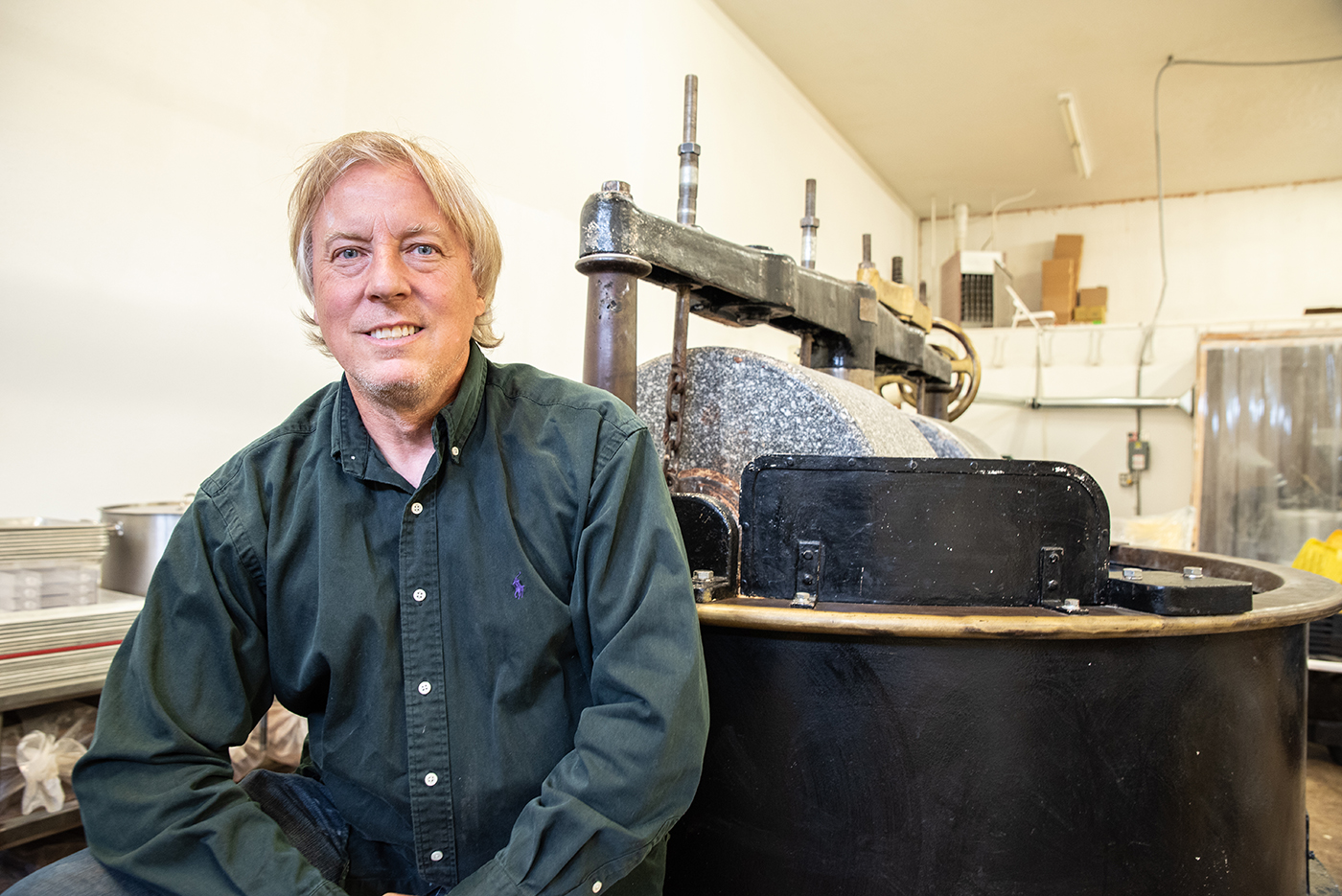 Amano Artisan Chocolate began as an engineer’s humble challenge, an “I can do that” idea that others laughed about. Nearly twenty years later, the former pet project is now an internationally recognized, award-winning bean-to-bar brand that works tirelessly to bend and break our preconceived ideologies about chocolate.

“There was a lot of trial and error in the beginning.”

Art Pollard, Owner and Founder, describes how Amano transformed from a handful of machines in a cramped apartment to the wholesale distributor it is today. He spent years tracking down the most unique cacao beans from all over the world. This, he says, is how chocolate should be made. Each recipe he creates is carefully developed from the best ingredients he can find. This means that his menu rarely changes, if at all. When he is unable to obtain a certain caliber of bean, production of that specific bar will be halted to guarantee the quality of his chocolate and the satisfaction of his loyal customer base. “There was a lot of trial and error in the beginning,” Pollard says.

No two cacao growing regions are the same, as the beans are affected by geography and climate. This causes the beans to take on distinctive characteristics that are easy to overpower. When experimenting with flavors, Pollard takes those nuances into consideration. “Our Dos Rios bar, [with beans] from the Domincan Republic has a taste of bergamot, orange and lavender,” he says. “Cardamom and orange are a natural flavor pair. Black pepper is a flavor enhancer. So pairing these three just makes sense—It’s amazingly scrumptious.” He prefers not to exceed 70% dark chocolate, as this is the ideal percentage in his opinion and experience.

Among their commercial products, Amano Artisan Chocolate offers one-pound bags of chocolate coins that state “For Chefs” on the labels. This is a rare option for a small-batch, artisan chocolatier to provide. Pollard says he offers this product due to his personal connection to the culinary industry and how it was this relationship that helped him access parts of the world that would normally exclude your everyday tourist. “If you use good-quality chocolate,” he says, “it improves the flavor of whatever you are making significantly and sets you apart from the rest.” He spoke of the various chefs that take advantage of the availability of such products, from local places like the restaurants in Snowbird to distant ones such as Chez Panisse in Berkeley, California.

When asked about what was next on the agenda for Amano, Pollard shares exciting news about a brand new bar. He brought in thousands of pounds of ingredients from Europe and, “It’s something that nobody else has done,” he says. He also briefly mentions something about world domination through fine chocolate, which I’m sure no one would truly resent if it were to happen.

“Try this chocolate and you’ll be sure you have found a favorite.”

I was able to procure two bars of my own to try. I chose the one we spoke about, Cardamom Black Pepper, and another from the Sambirano Valley of Madagascar for comparison. Amano’s reputation is well-deserved, as both were delicious. Pollard says on the packaging of the Madagascar, “Try this chocolate and you’ll be sure you have found a favorite,” and he is right.  “One of the things that is wonderful about chocolate in particular is that it brings joy to people,” he says. “It just makes people happy, and that’s what we need. We need a world that is more happy.” I couldn’t agree more. Follow Amano Artisan Chocolate on Facebook, Twitter and Instagram @amanochocolate. You can find Amano chocolates at most Salt Lake City grocery stores including Harmons, Caputo’s and Liberty Heights Fresh, as well as online at amanochocolate.com.