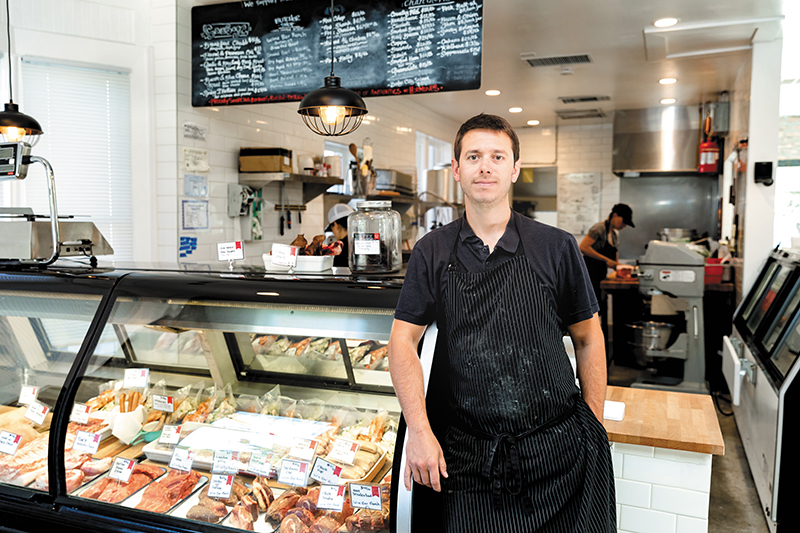 Beltex Meats: From Nose to Tail to Your Kitchen

Beltex Meats is a whole-animal, nose-to-tail butcher shop in Salt Lake City. It began in the summer of 2014 with appearances at a handful of local farmers markets. The support and response from these community markets allowed for the opening of a brick-and-mortar location across from Liberty Park on 900 South. Owner and head butcher Philip Grubisa takes a whole-animal approach to butchery, and presents a unique meat shop offering to our community.

Specialty butcher shops are a rare sight in Salt Lake. Most of our meat comes from supermarkets. On how his shop differed from a grocery store meat department, Grubisa says, “We have a whole-animal approach. We start with the entire carcass—a hanging hog, hanging beef, lamb. It hasn’t been cut up or adulterated yet.” He then clarified that much of what a conventional grocery store does is that they buy offsite processed “boxed beef” that is then repackaged and sold on those familiar foam trays. “Our problem is that our consumption of beef in America is far greater than it can actually provide for; it’s not a sustainable system, and our grocery stores aid in that instability.” When pressed to explain how Beltex’s model is more sustainable, Grubisa says, “We teach people that there is more to an animal than a pork chop, a ribeye, a filet or a New York strip. There are thousands of pounds to a cow outside of those cuts alone.” Beltex aims to show people an older style of butchery that deals with lesser-known cuts. These cuts are still very tender, can be grilled or braised, but are not being sold in supermarket settings. The more that we are able to use, the less of the animal goes to waste. In addition, a smaller number of animals is needed to meet demand.

Using unfamiliar cuts of meat can be challenging to the consumer. Grubisa gets it. “I grew up shopping in a regular grocery store with just a few things to choose from. It took me getting into the butchery world to see a use for cuts like bottom round, gooseneck round steaks and heel roasts.” These can be a challenge to sell, but Beltex still manages to sell them. “I was a chef,” he says, “so are the other guys that run the store with me. We are able to explain to customers how to cook less marketable cuts of meat. We can send a customer home with confidence.”

It is one thing to send a customer home with a strange variety of roast. As for the truly odd parts of the animal, “We use the entire carcass: organ meats, skulls, bones,” Grubisa says. “We make broths. We make cured-meat products like pâté. We even sell dog treats and raw dog food. We are a nose-to-tail-focused butcher shop, and we know there’s a use for every bit of the animal.”

Beltex offers many raw cuts of meat: steaks, chops and roasts. They also are able to do custom cuts because, as Grubisa says, “People may have a recipe or something that they haven’t seen in years that their grandmother’s grandmother used to make.” Their knowledge of how to extract those particular cuts is a disappearing art. They also offer many cured meats and European-style charcuterie. This includes salami, pâté, rillettes and much more—very traditional, and very hard to find locally. As far as the cured meats go, the pâté is a top seller.

As for the raw meat, the top seller is beef. “We are in a steak-and-potatoes area,” he says. This is linked to Utah’s agricultural background. Native Utahns make up a good percentage of the customer base, the rest being mostly displaced East Coasters. The influx of tech companies in the valley has dragged people from the outskirts of America to Utah, and many of these people are accustomed to stand-alone butcher shops. They are excited by the familiar experience.

Another focus of the shop is to use animals that are humanely raised and locally sourced. Their beef comes from Mount Pleasant and Boulder, Utah; the lamb is from Vernal; the hogs come from a producer just west of Tooele. “We choose these farms carefully,” Grubisa says. “We want pasture-raised animals that are antibiotic-, steroid- and hormone-free. The people who raise them also need to make sense to us. The animal husbandry needs to be done properly. From start to finish, the animals need to be properly taken care of.” And while these producers may not be certified organic by the USDA, Beltex looks for places that use organic practices. As a service that provides meat for consumption, Beltex sees a need to help its customers make better, conscious decisions on how animals are raised and used.

Beltex is still fresh on the Utah food scene. When asked what the future holds for the shop, Grubisa envisions more plated, orchestrated nights of dinners. Nose-to-tail dinners would both feature their products and would introduce customers to their whole-animal philosophy. They also supply a handful of restaurants with sausage and charcuterie and are open to doing this on a grander scale. Whatever they end up doing, when the products and the people involved are this good, there is bound to be a line out the door.