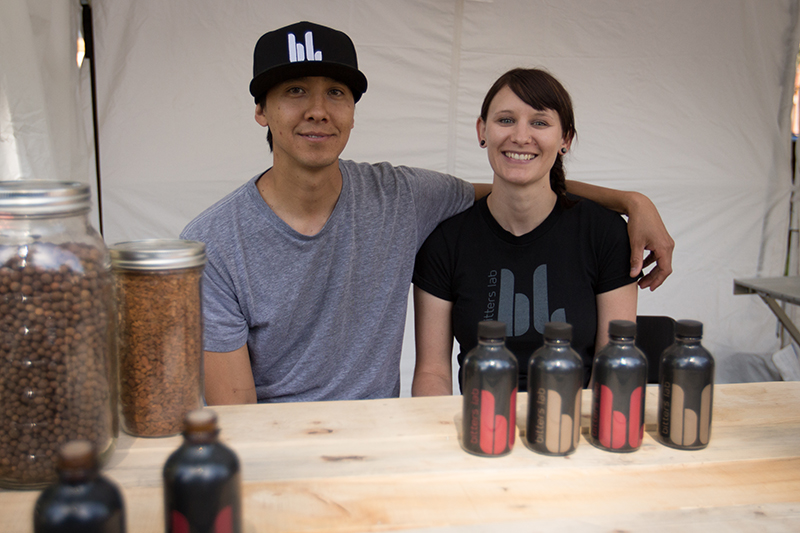 Most people with a hobby like gardening or record collecting are usually content to keep their hobby as something fun and relaxing to do on the weekend. Most people probably don’t let their hobby take over an entire room of their house and eventually start a business with it. Andrea Latimer and Jesse Coss, the spousal duo behind SLC’s Bitters Lab, are the latter kind of hobbyist. They followed their culinary and historical interest in cocktail bitters—highly concentrated extracts of quassia bark, gentian root and other flavoring agents essential to many classic cocktails—to the end of its logical path: making their own, and making them well.

Coss, a commercial photographer by trade, started collecting bitters as an extension of his whiskey collection. Like anyone who crosses the line between casual hobbyist to obsessive, Coss read any available literature about bitters and booze. “Reading about bitters and how most of the companies went down during Prohibition—it sparked an interest in me,” says Coss, “so then I started tinkering on my own, and that was it.” Latimer, who, at the time, ran a small bakery operation out of her home, began incorporating them into her recipes. “I started using them in French macarons, frostings and things like that,” she says. “That got us both excited about where we could take it.” Coss’ downstairs whiskey room soon turned into the namesake bitters lab.

Last year, the two combined their culinary- and bitters-making expertise into a Downtown Farmers Market food stand called Bittersweet—brûléed fruit and soft drinks, both spiked with their bitters, were their specialty. This year, they’re focusing on the bitters side of things under the Bitters Lab brand, moving production to a commercial kitchen in Downtown SLC. Though Bitters Lab eschews the old-timey look of most other bitters, the ingredients are old-school. They use all organic fruits, roots, barks and herbs whenever possible, and extract every batch with an all-alcohol base—no glycerin, natural or artificial flavorings, no artificial colors. In addition to the two versions they already offer—an aromatic bitters based on their very first batch, plus a charred cedar and currant bitters—Bitters Lab has, in Coss’ words, “a shitload” of other multi-layered bitters on the roster awaiting release. They’ll release one of these new flavors at their CLC DIY Fest booth. “It’ll either be citrusy or spicy,” Latimer says—“or both!” Coss suggests. Plus, look for Latimer’s homemade bitters gummies—bitters aren’t just for cocktails, you know.