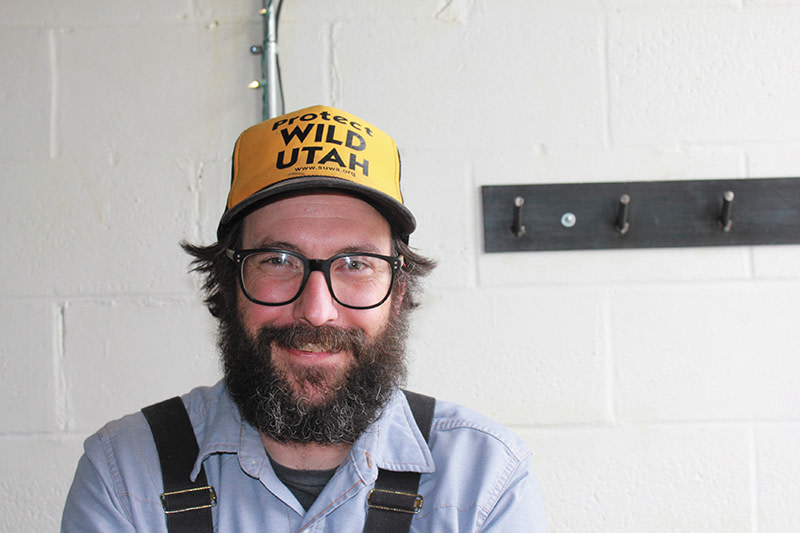 Colby Frazier of Fisher Brewing Company on the Beer Battle

Prohibition may have ended in Utah in 1933, but that hasn’t stopped Utah lawmakers from continuing to introduce restrictive legislation surrounding beer and alcohol.

However, in the most recent Utah legislative session, Sen. Jerry Stevenson (R-Layton) introduced S.B. 132—a bill that would allow beer sold in Utah grocery stores to raise alcohol by volume (ABV) from 4 percent to 6 percent. The Senate Business and Labor Committee voted unanimously to advance the bill to the floor, where it sailed through the Senate with a 27–2 vote, and landed in the House, where it met more stiff resistance.

“It is the most progressive liquor-law change proposed or denied since Prohibition ended in the state of Utah,” says Colby Frazier, Head Brewer and co-owner of Fisher Brewing Company, in an interview prior to end of the legislative session. “Utah will still be able to say that they have the lowest restriction on ABV in the country. That’s important for the Mormons who are voting for this bill right now.”

“This would be a progressive step, a moderate step in the direction I’ve always wanted to see beer go.”

Alcohol legislation in Utah has been influenced, of course, by the state’s significant Mormon population and the Church of Jesus Christ of Latter-day Saints’ Word of Wisdom, which prohibits followers from consuming alcoholic beverages. Inevitably, because the majority of the state’s population is Mormon, this will trickle into the legislature’s actions. Many local brewers have expressed concern and anger over the legislature’s tendency to consult the Church regarding matters of alcohol policy, citing a need for separation of church and state.

Frazier is firmly in favor of any legistlation that would raise ABV of the beer available in local grocery or convenience stores. “I’m for it simply because we believe that change happens to liquor laws in Utah pretty rarely,” Frazier says. “This would be a progressive step, a moderate step in the direction I’ve always wanted to see beer go.”

Rather than put the bill to an immediate vote in the House, it failed but was then revived, with the House forming a task force to investigate whether the state really needs to raise the limit of beer sold in grocery stores.

“Utah is the only state that regulates not only wine and spirits, but also beer.”

On March 13, the second-to-last day of the legislative session, S.B. 132 passed in the House, but with some compromise. The amended bill will raise ABV levels from 4 percent to 5 percent, rather than the proposed 6 percent. The final version of the bill passed in the Senate on March 14.

“I have mixed feelings,” says Frazier in a second interview after the bill was passed. “On the one hand, I’m stoked that Utah had a discussion about beer and alcohol, and the needle moved in a progressive direction. There are some problems with the bill that passed. For instance, they increased the taxes local brewers must pay for each 31 gallons of beer they produce. This tax rose from $12.80 per 31 gallons to $13.10. That sucks. And I would have preferred 6 percent to 5 percent.”

There is a long and arduous history of beer law in the state of Utah, of which S.B. 132 will just become part of the timeline. After Prohibition ended, several attempts to make Utah a completely dry state had failed. Since 1935, the Utah Department of Alcoholic Beverage Control (UDABC) has regulated the sale of alcohol, making it one of 17 “control states”—meaning the state has a monopoly over wholesaling or retailing. Utah is the only state that regulates not only wine and spirits, but also beer.

“It’s important to note that this bill was not brought forward by local breweries.”

When the Winter Olympics came to Salt Lake City in 2002, the UDABC relaxed the enforcement of Utah’s alcohol laws after an official complaint from the International Olympic Committee, which would better accommodate out-of-state and international visitors. This eventually led to a change on May 5, 2003, which benefitted wine drinkers and allowed individuals to bring home the remainder of a bottle of wine ordered at dinner, among other benefits.

Among many other alcohol-related laws, there was the 2010 legislation enacted that restored barriers, or the “Zion Curtain” between bar areas and the seating of individuals under the age of 21. In 2017, another bill was passed that allowed the removal of the Zion Curtain. 2017 was also the year that Frazier teamed up with Tim Dwyer, Tommy Fisher Riemondy and Steve Brown to reestablish A. Fisher Brewing Company, which had once existed from 1884 to the mid–20th century.

This brings us to 2019, where, unlike Frazier, some other local brewers were opposed to S.B. 132 because they claim the bill itself is motivated, written and being put forward via lobbying efforts funded by large, out-of-state and out-of-country macro-brewing concerns, such as Anheuser-Busch, MillerCoors and Heineken.

“These changes are likely to be subtle across the board. But I believe you will see a flurry of new local beer labels clocking in near 5 percent.”

“It’s important to note that this bill was not brought forward by local breweries,” Frazier says. “It was paid for and sponsored by tangential beer interests: retailers and wholesalers. These folks have money, lobbyists, and they’re quite smart. For instance, they knew that the legislature had no appetite to raise alcohol levels to the stars, and so they chose 6 percent, a number that would have matched the nation’s newest low number put forth by Kansas. They knew that the discussion needed to be about business and consumer choice, not just alcohol. In order to get my say, I did what any concerned citizen might do: I contacted the bill’s sponsor, the lobbyist and hiked my ass up that hill and told them how I felt. Sometimes, that’s about all you can do.”

While Fisher beer isn’t sold in grocery stores, Frazier will now have the opportunity to create higher-point beer to be sold on tap. “The jump from 4 to 5 percent will allow me to make certain styles of beers (hoppy pale ales and porters, for instance) that have a bit more body and, perhaps, bolder flavor profiles,” he says. “These changes are likely to be subtle across the board. But I believe you will see a flurry of new local beer labels clocking in near 5 percent. When the law goes into effect this November, I think the Utah beer aisle is going to look a lot different.”

Among some of the concerns about raising the ABV of tap and grocery-store beer offerings is the dwindling availability of local beers as out-of-state breweries making higher-point beer filter into stores, potentially limiting some of the shelf space available to local beers.

“This little spat over S.B. 132 was fairly fractious. I’d like to see the local brewing and alcohol communities unite on our shared interests and continue to thrive in the Beehive State.”

“That’s something that I don’t know that much about—distributing, grocery store, shelf space,” says Frazier. “We don’t distribute our beer. We don’t package our beer on a wide scale. And the only thing that I can say to that is that there is a movement, a really favorable movement across the country, for local products. And local beer is not an exception to that. While there is a limited amount of grocery-store shelf space in the state of Utah, there is in every state. There’s no doubt that there’s going to be a much broader availability of national brands that we’re all going to have to compete with.”

Throughout the 2019 Utah legislative session, conversation among brewers sometimes became contentious—some wanting a limitless ABV, some desiring alternative lobbying origins, others hoping for no change at all as they held the reins of 4-percent beer.

“The future is complicated,” Frazier says. “This little spat over S.B. 132 was fairly fractious. I’d like to see the local brewing and alcohol communities unite on our shared interests and continue to thrive in the Beehive State. I believe this is possible. Certainly, I hope that my daughter’s daughter gets to make a beer someday with higher alcohol than 5 percent and pour it on draft at Fisher. Hopefully, steps continue to be taken in an onward-and-upward direction. Progress, you know?”

“Hopefully this task force arrives at this truth: Beer is not responsible for the scores of societal ills that was cast upon it during this legislative session.”

And progress seems to be the optimal concept for most Utah beer drinkers and brewers. Frazier refers to the passing of S.B. 132 as “nothing short of the most momentous change to Utah alcohol policy in nearly a century,” but also believes that a perfect storm of national alcohol policy changes and major shifts in the culture and demography in the Utah legislature must occur before more of the kind of progress he wants is achieved.

“I’m quite skeptical about future legislative opportunities to change alcohol policy in Utah,” Frazier says. “There is, though, one possible exception. S.B. 132 created an alcohol task force of sorts that is going to be required to, among many other things, study the impacts of increasing the amount of alcohol in beer in Utah. Hopefully this task force arrives at this truth: Beer is not responsible for the scores of societal ills that was cast upon it during this legislative session. It should be revealed to those who dictate alcohol policy in this state, who do not drink and are hostile to alcoholic beverages, that beer has long been available in Utah. Some people drink too much; some people aren’t responsible; some people let their kids drink alcohol; some kids drink alcohol, etc. And sometimes, bad things happen when people abuse alcohol. All of these things happen regardless of how much alcohol is in beer. We need to promote education and start taking care of our fellow humans. Blaming beer for suicide, domestic abuse and depression is simply a way to ignore the fact that most of us have issues. We need to deal with our issues, not blame them on beer.”