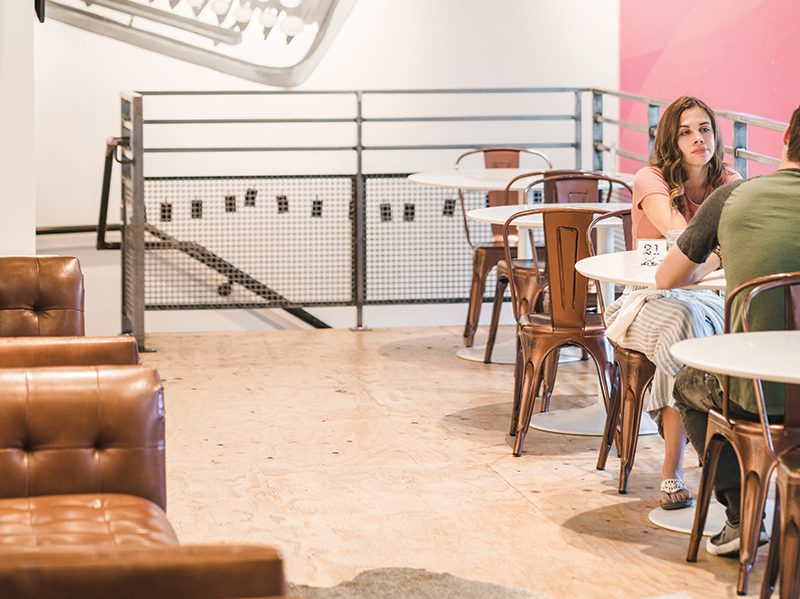 At some point in the past few decades, people realized that they don’t want everything passed to them through a drive-thru window and made in under 30 seconds. It is nice to sit back in a pleasant coffee shop, sip some coffee or espresso and maybe partake of a baked good or even more. But what about coffee’s sometimes overlooked sibling, tea? At Cuppa in Ogden, tea gets its due.

Created by Nathanael and Bec Sato and located just off storied Historic “two-bit” 25th Street, Cuppa offers a massive selection of organic loose-leaf teas. “We have more teas than you would find at any other coffee shop, I’m sure,” says Nathanael. “My wife and I are a little more passionate about tea, but we said, ‘Well, as long as we’re building this place, we can offer some coffee in here, too.’” Named for the inclination of English people to offer a “cuppa” instead of “cup of tea,” the Satos sought to create a place where people would want to hang out and read or study.

“We have the coffee alternatives that are amazing.”

The lines between coffee shop, bakery and restaurant are ever blurring. Compound that with an increasing public awareness of where our food comes from and what is in it, as well as special dietary needs. Opening up a new food venture seems daunting, but in late 2017, the Satos did just that. They offer an impressively large menu, which has evolved over time. Everything on their menu is organic, plant-based and local. They offer gluten-free, vegan pastries and a variety of substantial meals, including but not limited to: a savory tofu waffle with jackfruit, a TBLT with tempeh bacon, keto superfood salad with goji berry, and jackfruit street tacos. For drinks, they have full coffee and espresso options, the aforementioned teas, as well as tea lattes such as matcha tea or masala tea lattes. As if that weren’t enough variety, “We bought an ice cream machine and we found ways to do horchata, organic, plant-based soft-serve ice cream, so I really love that we have that,” says Nathanael.

They have multiple other options for people who don’t partake of “hot drinks” like tea and coffee, so there is something for everyone. “We have things to offer people who aren’t plant-based or who aren’t thinking necessarily about healthy eating or mindfully consuming,” says Nathanael. “We have people who come in who don’t drink coffee and don’t drink tea and then they’ll find something like kombucha or a lemonade or limeade, and then we have the coffee alternatives that are amazing.”

Their kombucha is local and on tap, sourced from Ogden brewer Sünnte. Due to the local connection, they have been able to collaborate on small-batch unique brews that wouldn’t necessarily be fit for mass-market distribution. “We’ve done one called Happy, which I think turned out to be one of everybody’s favorites. It has a lot of raspberry; it’s really fruity and light,” says Nathanael. “We’ve done some that were kind of specialized for feminine energy and some for masculine energy. We’ve done some that have more fruity mango flavors to them—wildberry.”

“We really are just obsessed with creatives and creative energy.”

It is clear just by seeing their menu that they genuinely care about what they offer. “There are places that strive to do organic or do locally, and then there are a handful of places that do plant-based, but it’s kind of across the boards to do both,” says Nathanael. “It’s a challenge. It’s really hard to do. I think we’ve been willing to take those risks and do things a little differently than other people.”

All of this is offered in a large, brightly lit space with many green plants adorning the space – It is multi-level, with a patio and many seats. They have couches, chairs, board games and even a piano that can be used by patrons. There is a well-maintained dog run in front, so doggies are welcome as well. To boot, they’ve hosted musical performances from locals like Marny Lyon Proudfit, Brooklyn Kohl, David Moon and Shanon Blake, as they participate in the weekly Ogden Art Stroll every first Friday evening from 7–9 p.m.

Speaking with Nathanael, it is clear that their intent carries beyond the food they serve. The owners refer to their employees as “blessings.” The tagline on their website says, “A cafe for creatives. Gather, nourish, create.” Other positive language peppers the site. “We really are just obsessed with creatives and creative energy. And then having a space where people can feel safe and comfortable to express themselves, whether that’s writing or coding or music or art,” says Nathanael. “We change out our art with the local gallery strolls, we try to feature local artists to come and showcase some of their stuff, too.” Writers and artists have long frequented cafes for discussion, work or just inspiration. With this all in tow, Cuppa has collected all the pieces of what turns a regular space into a “creative space,” a forum for growth and development of Ogden creatives.