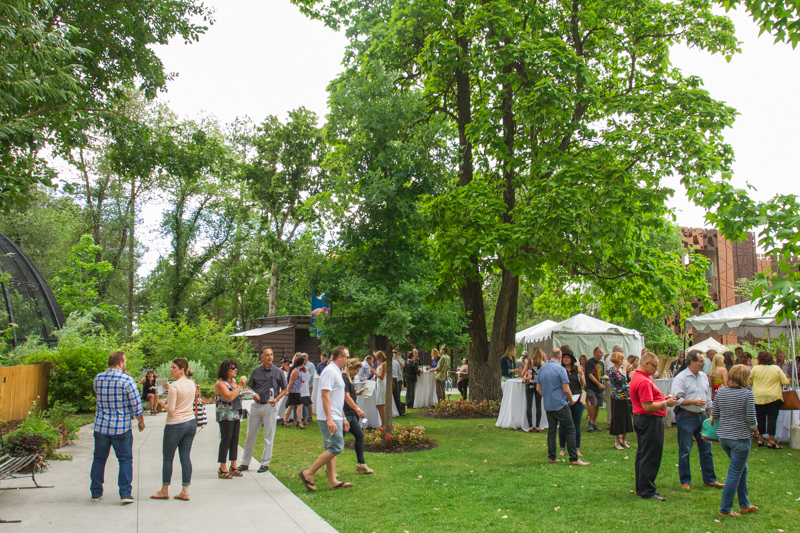 Words like marriage and communion carry some serious weight. They’re not words that we throw around without purpose—these are words that our language has reserved to describe the more transformational aspects of life. The fact that these words appear throughout Eat Drink SLC’s mission statement goes to show exactly how important food and wine are to the event organizers. As we saw during its inaugural event last year, this is no ordinary local food event.

Founded by executive members from SB Dance, Tracy Aviary and Vine Lore, Eat Drink SLC strives to create an evening that fosters a true appreciation of the culinary arts by featuring chefs from local restaurants and pairing their creations with wine and spirits from all over the world. “Over the last five years, Salt Lake has emerged as a disruptor in the culinary world,” says Tracey Thompson, vice president of local wine brokerage Vine Lore. “The libation market in Utah has grown because our demographic has grown—we have lots more progressive and educated wine consumers.”

As the part of the event’s organizational triumvirate that is responsible for the Drink component of Eat Drink SLC, Thompson and Vine Lore have been busy preparing for this year’s event. Boasting an impressive catalogue of both international and domestic vendors, Vine Lore has been operating as Salt Lake’s premiere wine and craft spirits brokerage for the past 20 years. While Utah’s restrictive liquor laws and strong religious presence tend to feed the stereotype that we’re living in a dry state, the reality is quite the opposite. “Utah has traditionally been a small market,” Thompson says, “but from the recession moving forward, tertiary markets like Utah have become very popular.”

In addition to bringing a heightened level of wine expertise to Eat Drink SLC, Vine Lore works hard to facilitate organic pairings between the event’s food partners and libation partners. “We don’t have a food event of this size that intermingles both food and wine,” Thompson says. As soon as the event organizers have finalized the list of food partners, Vine Lore reaches out to its catalogue of vendors to create thematic pairings. This gives both parties time to communicate and collaborate on the food and wine pairings that have made the event famous. “Last year, we had 17 food partners and 17 libation partners, and we capped the event at 300 people,” Thompson says, “This year, we’re up to 21 food partners and 21 libation partners, and we’ve increased the capacity to 500.” With this year’s expansion, attendees can also expect to enjoy live music as they make the rounds.

As attendees of last year’s event will attest, Tracy Aviary is a perfect backdrop for all of this lovely food and wine. “You can’t beat the setting,” Thomspons says. “It’s drop-dead gorgeous and stunning.” The size and staging of the venue makes the event feel like a lush selection of multiple diverse garden parties. Meandering through each destination as the sun sets is the ideal way to savor as much of the cuisine and libations as possible—despite the event’s three-hour length, some attendees were unable to visit every partner. While much of this is attributed to the event’s atmosphere of gradual enjoyment, it’s also due to the fact that attendees are encouraged to discuss the food and wine with their hosts. “Our libation partners are wine ambassadors, so you get this educational component as well,” Thompson says.

As the event is drawing closer, Thompson offered a sneak peek at some of this year’s food and libation partners. The newest addition to the event’s gastronomic lineup will be Handle Salt Lake, an extension of Park City’s wildly popular purveyor of new American cuisine. Attendees will also recognize culinary stalwarts like Copper Onion, Frida Bistro, Avenues Proper and Cucina Deli. The libation partners will include spirits from local favorites Beehive Distilling and Rocky Mountain Distilling, along with craft beers from Uinta Brewing and Proper Brewing Co. From out of state, attendees can sample wine from national vendors like Duckhorn Vineyards and Mira Winery, and selections from the Winebow Group out of Italy. “From Blue Chip brands to small, family-owned producers, it’s important for us to feature a whole spectrum of wines,” Thompson says.

While those of us in Utah are more than happy to welcome wine ambassadors from all over the world, their inclusion in Eat Drink SLC helps to establish Utah as a serious player in the culinary scene. When passionate people from the food and wine industry come to events like these, they effectively broaden their perspective as to what Utah’s food scene has to offer. Not only does this help Utah shed its negative, stuffy stereotypes for the rest of the world, but it also creates an opportunity for wine lovers in Utah to take a curated wine tour right in their backyard. “It’s important for the three founding organizations to celebrate Salt Lake’s coming of age as a culinary hotspot,” Thompson says. With events like Eat Drink SLC becoming more common, we definitely have a lot to celebrate.