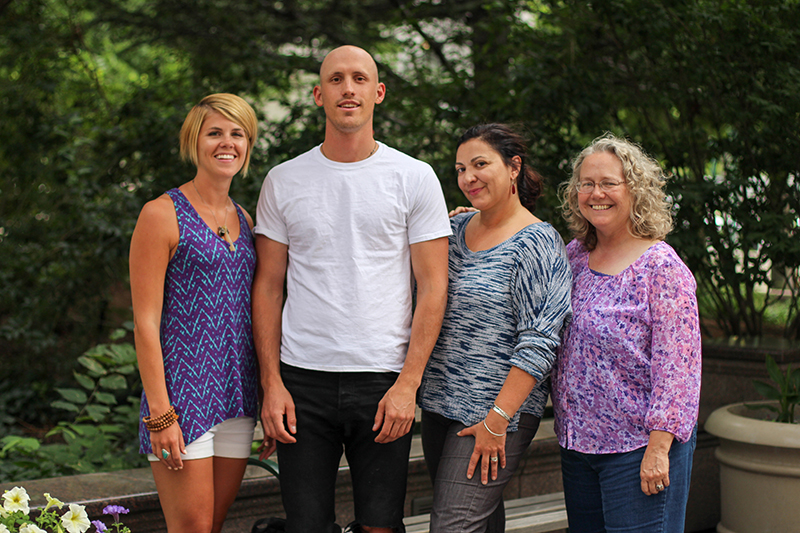 Eat Local Week: Put Some Utah In Your Mouth

Rising from an epic union among several of Utah’s most influential food and educational organizations, Eat Local Week promises to impress the most hardcore of picklers to the most timid of shoppers. Taking place from Sept. 12 to 19 at various venues across Salt Lake City, Eat Local Week is dedicated to showcasing our local agricultural rock stars, their face-melting cruciferous veggies and the adoring fans who keep chanting for more. In what began as a locavore challenge among friends, Eat Local Week is quickly becoming one of Utah’s favorite ways to enjoy all of the delicious fruit, vegetables and meat grown right here in the Beehive State. According to Eat Local Week’s steering committee—Program Director Adrienne Tuerpe, Gwen Crist of Slow Food Utah, Mike Lynch of Wasatch Community Gardens and Kim Angeli Selin of the Downtown Farmers Market—Eat Local Week is gearing up to throw one hell of an autumnal harvest party.

The core of Eat Local Week is the “eat local” pledge that the organization encourages participants to take. There are three different levels to the pledge that are designed to accommodate anyone who’s interested: DIY, Easy-Does-It and Hardcore. “There are people who have never even thought of eating locally, but maybe want to try it out, and those who are already doing so much, but we still want to challenge them,” Tuerpe says. “It’s all about helping people take eating locally one step further. Even encouraging people to come in at that beginner level is really exciting to us, because we understand that those small changes that people make can have such a huge impact.” All this talk of pledging and habit-changing sounds intimidating, but all a person really needs to do is make sure one or more of their food staples has been grown here in Utah—the closer to your city, the better. Love cheese? Grab a wedge of Barely Buzzed from Beehive Cheese. Cured meats more your thing? Check out Creminelli’s Tartufo Salami. The one caveat to this challenge is that locally made doesn’t always mean locally grown, so it helps to keep substitutions simple.

While I had envisioned the origin of Eat Local Week as an earth-shattering moment among a super-powered gathering of Utah’s most elite culinary and agricultural minds, it actually evolved a bit more … organically. In 2007, Salt Lake natives Andrea and Michael Heidinger decided to conduct an experiment. Together, they challenged themselves to subsist on a diet composed of food that was farmed within a 100-mile radius of their home. Those whom they contacted for advice wanted to participate as well, and the group committed to the challenge of going locavore for one week. As this pledge required participants to become more familiar with Utah’s local food vendors while adopting a more strategic approach to shopping and cooking, our heroes realized that trying to eat locally was not only fun but delicious, too. Slow Food Utah and the Wasatch Community Gardens have been involved since the beginning, and the Downtown Farmers Market was soon to follow. With the increased support and awareness that the challenge received every year, the first Eat Local Week event series was born in 2012.

Building a week-long event series around this pledge made sense for all organizations involved. “I think that smart nonprofits know that they are allies within the community, and they work together,” Angeli Selin says. “We all have a different niche for the same thing, which is getting people to obsess about food—in the good way.” In the nonprofit sector, understanding the particular strengths of different organizations and working together is necessary to substantially raise awareness for a specific mission. “Instead of these three organizations working separately and flooding the audience with a million different ideas, it’s easier to bring all their ideas together,” Tuerpe says. “It’s a lot more powerful together than any one of these organizations would be separately.”

With the “eat local” pledge at its focus, Eat Local Week promises to provide a wide range of food-centric events that will show attendees how easy eating locally really is. “One event that I’m really excited about is the Quickle,” says Lynch. “People who do their farmers market shopping at the Tuesday market that week can stop at the Quickle Station and turn what they’ve got into a fridge pickle. We’ll have three different kinds of brines and free jars—the only thing you buy is the veggies.” Pickling is a beneficial skill for anyone who grows way too much zucchini and doesn’t want to waste it, and the Quickle gives attendees the foundational skills to start making shelf pickles for food storage. “You’re 90 percent of the way to making shelf-stable pickles at the Quickle event,” Lynch says. “It takes a lot of the mystery out of pickling.”

For film buffs, Brewvies will be screening Morgan Schmidt-Feng’s documentary On Her Own on Monday, Sept. 14. The film tells the story of Nancy Prebilich and her struggle to keep her family farm afloat during the recession of 2008. To complete the traditional Brewvies experience of enjoying a tasty meal and a good flick, attendees will be able to partake from a local taco bar, which is another great way to keep on track with the “eat local” pledge.

There will also be a week-long challenge called “Food Quest,” a gastronomic scavenger hunt that will render prizes for completing certain locavore objectives through the course of Eat Local Week. “Official challenges won’t be released until a few days before the event, but ‘Food Quest’ will offer something for everybody,” Tuerpe says. “They’re things that can be done at home, in your backyard and with your friends. For example, going to a U-Pick farm, picking some apples to turn into a pie that you give your neighbor will get you lots of points that can be exchanged for prizes.”

Each of the week’s activities are designed to bring the community together to celebrate Utah’s bountiful array of locally produced food, but the purpose behind Eat Local Week is to educate people about the big picture behind what eating locally can do for the planet. Typically, participating in large environmental-change movements requires a lot of self-sacrifice and hard work—with Eat Local Week, all one truly has to do is eat local food that tastes really good. “The ‘eat local’ challenge boils down to a pretty self-centered reason: It’s all about the taste and nutrition,” Crist says. “When food doesn’t have to travel as far to get to you, it tastes better and is more nutritious, and then you’re talking about enriching and preserving your community by sustaining agricultural land and by supporting farmers. Then it gets into higher levels of awareness, getting all the way up to things like carbon footprint and environmental impact.”

Another goal of Eat Local Week is to get people into the habit of finding local food year round, but even the most devout locavores are bound to face some obstacles when implementing these practices into their daily lives. A big misconception surrounding locally produced food is that it’s more expensive, but that’s not necessarily the case. “Eating seasonally is actually very affordable,” Tuerpe says. “Finding the abundant products in season at the farmers market is the best way to eat locally on a budget.” In addition to multiple farmers markets, some of which are in service all year, Utah is home to many options for those who are looking to eat locally on a budget. There are several Community Supported Agriculture (CSA) groups that offer shares of locally farmed produce, or, for those who are more DIY-minded, the Wasatch Community Garden offers gardening plots and classes that demonstrate how to use them. “The majority of farmers markets accept food stamps using a token system,” Angeli Selin says. “This year, in partnership with Utahns Against Hunger, there’s a double-up matching program. So if you run your card for 10 bucks at the markets, you’ll get 10 tokens to spend at the market and 10 bonus tokens that can be spent on just fruits and vegetables.” Not only can eating locally be surprisingly affordable on the individual level, it also cuts down on the cost of transporting food into Utah from other states. “Sourcing directly and eliminating middlemen always eliminates money spent on packaging and distributing food,” Tuerpe says.

As Program Director for this year’s Eat Local Week, Tuerpe has a lot on her plate, which is not necessarily a bad thing, since it’s all edible. In addition to organizing the event programming for Eat Local Week, she’s currently the Operations Manager for Edible Wasatch, a local publication that offers recipes and lifestyle tips for those seeking to establish a more harmonious relationship with their food.

Slow Food is a nonprofit organization that was developed as a response to our country’s growing reliance on a fast-food lifestyle. Crist has been involved with Slow Food Utah since 2007 and is the current Chair of Utah’s Slow Food chapter.

This year’s Eat Local Week will be the first for Lynch, Community Education Program Director for Wasatch Community Gardens. To christen his involvement, he’s bringing a few hundred locally grown tomatoes for Eat Local Week’s tomato sandwich party, a move ensuring his presence for many events to come.

Anyone who has ever spent a Saturday morning stocking up on produce, meat and other delicious goodies at Salt Lake’s Farmers Market owes Angeli Selin a high five. She’s currently the Market Director of the Downtown Farmers Market, where she has expanded the event into the largest open-air market in the Intermountain West.

After discussing this event with Eat Local Week’s steering committee—and putting them all on speed dial to prepare for the inevitable zombie apocalypse—I tried out their advice. Like many people who plan on taking the “eat local” challenge, I was already doubting the possibility of finding something locally grown in the den of commercial iniquity where I usually shop. I was in the store for maybe two minutes when I spied a buxom set of ripe tomatoes from Houweling’s Greenhouse, grown just south of us in Mona. Surprised at the fact that I didn’t have to spend a lot of time reading labels, and even more surprised at the reasonable price, I brought my find to the cash register. While it’s likely the cashier mistook my idiotic grinning for something unwholesome, I can’t remember the last time that buying tomatoes made me feel so proud.