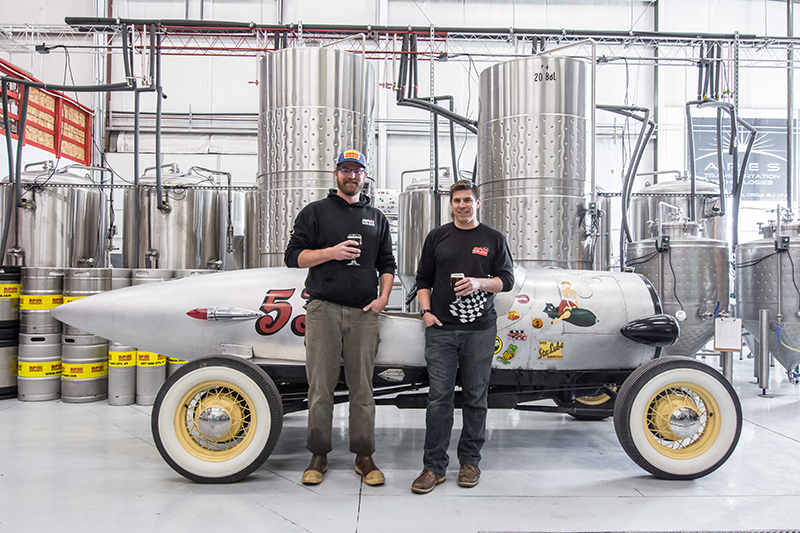 From The Garage to Salt Flats Brewing: A Beer-Fueled Journey

I have to admit that I was surprised when I walked into Salt Flats Brewing’s large warehouse. Located in a west SLC industrial area, there’s a row of race cars lining one side of the building and giant shining, fermenting barrels towering on the other. After Jeremy Ford—who oversees operations at Salt Flats Brewing—offered me a beer, I thought for a moment that this stunning collection of cars and large beer production could only come together in some sort of dream. What Salt Flats Brewing has to offer was nowhere near my normal Wednesday-afternoon cup of tea, and I was feeling thirsty.

As Jeremy poured me a glass of Salt Flats Hefeweizen, he introduced me to the rest of the crew: Steve Pruitt, the owner of the brewery and of The Garage Grill in Draper, and Scott Parker, the brewmaster. Pruitt has been in the racing world as an owner and driver since 1975. The warehouse where the fine beer I sipped had been crafted was home to his racing team until the expenses of the sport made the restaurant business seem like a better venture.

“We started out as the Salt Flats Grill and Brew House [now Garage Grill], where we had a one-barrel brewing system,” Pruitt says. “The restaurant took off, and we decided to make room for more people, so we moved the brewing operation to the warehouse.” With so much space and customers taking a liking to some of the brew they produced, it was time to expand brewing operations. Steve cleaned up the space and invested in an admirable brewing setup, able to produce a line of 20 different beers under the name RPM Brewing, which they soon changed to Salt Flats Brewing. “We went with RPM early on, which fit in with the Garage Grill in Draper, but unless you’re a gearhead, RPM doesn’t make as much sense,” Pruitt says, pointing to a slick-looking car that looks, to me, like a rocket ship. He had raced it on the Salt Flats, which makes for a decent brewery name and a solid bridge between his love of racing and something that might get more traction with an average beer fan.

Seeking how to create a unique beer in a quickly growing craft brew market, Pruitt brought in Parker, who had been brewhouse manager at Firestone Walker Brewery in Paso Robles, California. “Scott has been able to pare down what he knows about beer to the 4-percent [alcohol by volume] content,” Pruitt says, “and retain the flavor.” Parker adds that using the freshest malts, freshest hops and maintaining strict expectations of cleanliness have been key factors in his brewing.

All 20 of Salt Flat’s beers are currently 4-percent ABV, or 3.2-percent ABW (alcohol by weight), and the Salt Flats crew doesn’t see that as a disadvantage (even as potential changes to Utah’s liquor laws loom, which may allow for higher-point beers to be sold in grocery stores). Pruitt, who questions whether the laws will actually change in a state where alcohol regulation can be slow-moving, maintains an optimistic perspective. “Selling high-point beers in grocery stores doesn’t really align with the state’s new legal driving limits,” he says, referring to the state’s .05 blood alcohol level. “These 3.2 beer sales will be so small for major distributors that it won’t be worth it for them to sell in our state, and they’ll be clearing the shelves for local craft brewers to fill the need.”

With six of their beers canned for mass distribution, Salt Flats is ready to respond to whichever direction the market goes with beers that will satisfy every palate. The marketing behind Salt Flats targets both fans of craft beers and other, more widely distributed beers like Coors and Bud Light with their P1 Pilsner, Salt Flats Hefeweizen, Daytona IPA and Back Seat Blonde Ale, which are among the beers that you’ll soon find widely available. “Our branding approach is different than what you’ll see locally,” Ford says. “We’re a little brighter, a little louder. There is a barrier into the everyman market, and this makes our beers accessible.”

What you won’t be able to get on grocery-store shelves you can currently find on tap at The Garage Grill in Draper, which Pruitt describes as “something like what you would expect to see on Gasoline Alley,” where you can also find sushi, wood-fired burgers and pizza, and unique specialties like Sushi Nachos (fresh tuna loin, seaweed salad, crab and avocado cream sauce piled on top of fried wontons) and the Crabby Patty (a wood-fired burger topped with tempura-fried shrimp and eel sauce). All 20 of Salt Flats’ session beers are available, and a selection of other breweries’ high-point beers will soon be jettisoned to make room for their own high-point Scottish Ale, Double IPA, Oatmeal Stout and Belgian Double.

Regarding the lack of other beer staples on tap like the Coors and Buds of the world at The Garage Grill, Pruitt admits they took a risk. “Some people haven’t changed what they’ve been drinking since they started, but when we can sway them to try our P1 Pilsner instead, they love it,” he says proudly. “We’re easy to understand, and when you try our beer, you’ll like it.”

With mass distribution in coming months, you can currently find Salt Flats beers at the The Garage Grill and Toscano Restaurant.