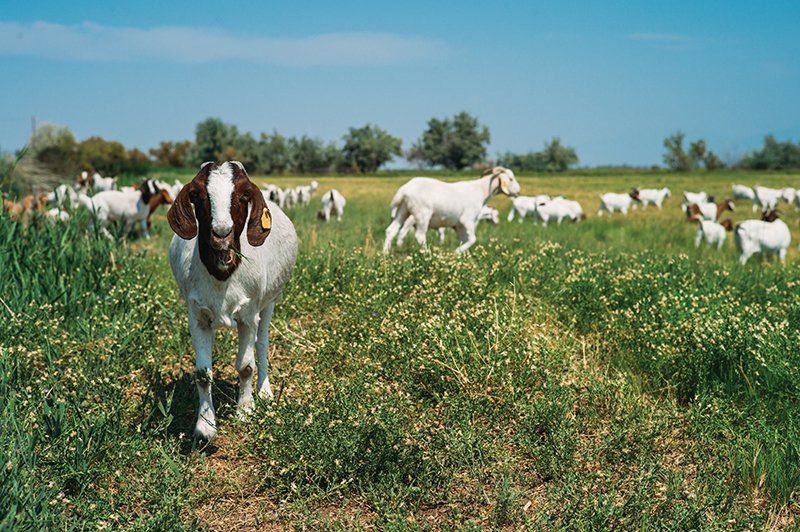 Fifteen minutes from Downtown—on a ranch by the Salt Lake City International Airport—you’ll find a herd of about 450 goats, kids and mamas grazing ravenously near the mountainous Utah landscape. The ranch is a fascinating sea of horns and hooves paired with a soundtrack of “baaas” and grass-munching. This ranch serves an important purpose—it is a raising and breeding ground for the goats of The East African Refugee Goat Project of Utah, an organization brought together by East African refugees and our very own community members, with the purpose of providing affordable halal meat to East African communities.

“Halal” in Arabic means lawful, and within Muslim culture, it is what determines the food they can and cannot eat according to their religious beliefs. In Salt Lake City, it is difficult to find halal meat that is affordable or attainable, thus creating a sizable demand for it within Muslim communities, such as with our local East African community. In a successful attempt to provide a solution to this problem, three African groups who resettled in Salt Lake City as refugees came together with a plan. Somali Bantu, Somali Bajuni and Burundian nationals have backgrounds in goat herding and raising, and their cultures practice using goats as a food source. This sparked the idea that paved the foundation for The East African Refugee Goat Project of Utah. The International Rescue Committee was nominated by the African communities to help nurture and advance this project. Drawing from their culture and practices from home and working hand in hand with the IRC, these groups were able to find a solution to their problem. All systems were goat.

“The project began with 45 breeding [doe] purchased by the IRC five years ago, and the growth of the herd has come principally through breeding,” says Joshua Lloyd, the Economic Program Manager for the IRC. “Each spring, the goat mamas have their kids, and we have volunteers out at the ranch who help us keep an eye on births and help keep the kids and mamas healthy. This spring, we had 170 kids.” Today, the hard work of these staff members and volunteers involved in taking care of the herd has led to a count of 450 goats.

It is a tight but effective group of volunteers and IRC staff members who make this all possible. “The project has a couple of herds-people and a project coordinator who run the operation out at the ranch … “ Lloyd says. “The project [also] has an advisory board. Represented there are leaders from the three communities, the Utah Refugee Services Office, Utah State University extension, local ranchers, the IRC and Rio Tinto Kennecott, who own the land where the goats are kept.”

I had first heard of the Goat Project through a friend, before knowing anything about their production of halal meat. She brought it to my attention after witnessing a fenced-off area by Kilby Court on 300 West, and within it, a pack of goats grazing. After asking Kilby Court staff, we learned that the goats were rented to the owners of that property as an environmentally sustainable method for weed management. In addition to selling halal meat to refugee families, this is another way that the project is financially supported and, in turn, supports our community and environment.

After the first year of the project’s inception, the IRC came together with the USU extension to integrate refugee youth. This is called the 4-H program, and offers a way to put in the groundwork in establishing the potential for a college education in their future. “The 4-H efforts of the project … began four years ago with three youth that participated in raising and showing their goats at the Salt Lake County Fair,” Lloyd says. The 4-H youth choose their kids in the spring and spend their summer out on the ranch preparing to display their prized goat at the fair. Lloyd says, “Their goats were auctioned to buyers who are there to support the youth. The money the youth make from the goat auction they can use to (hopefully!) save for future education.”

With hearts and minds focused on their future while implementing skills from their past, these communities found a way to make Salt Lake City feel a bit more like home. Lloyd says, “It is a serious and important pastime for members of the communities to have and harvest goats … The culinary aspect of eating the meat is very important, and participants in the project have as many different ways of preparing the food.”

Lloyd mentions that the land where the ranch sits looks similar to the landscape where our Somali Bantu, Somali Bajuni and Burundian neighbors resettled from, a serendipitous coincidence that adds a sense of reassurance. Anthony Bourdain said, “If you sit down with people and just say, ‘Hey, what makes you happy? What’s your life like? What do you like to eat?’… they will tell you extraordinary things, many of which have nothing to do with food.”

I look forward to seeing more goats tackling weeds around our city. In the present and in the future, I hope to see more projects like this help weave together different ends of the earth through community support and the mutual understanding that wherever you’re from, food can bring you together. You can learn more about The East African Refugee Goat Project at  facebook.com/EARGPU.