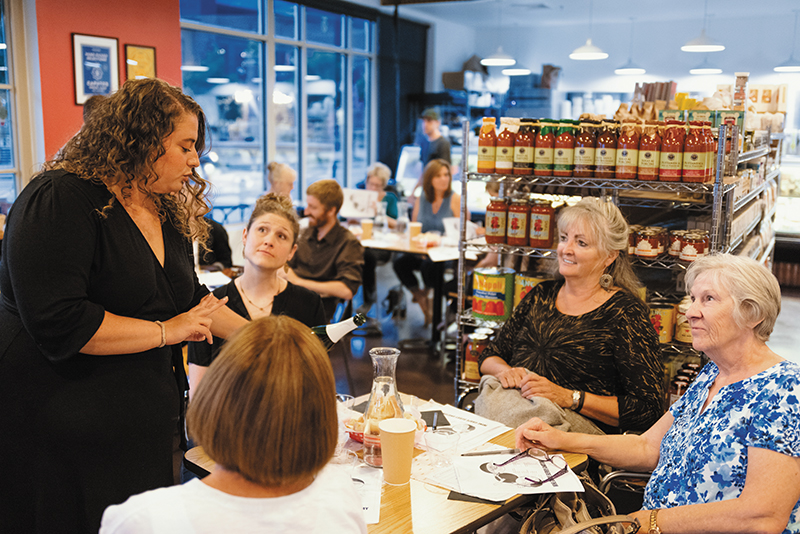 How Utah is creating its own “Little Italy” at Caputo’s

Italia, it rolls off your tongue. The country is known for its culinary cuts as well as its ambiance—that of dripping candle wax on a straw-covered bottle, red-sauce pasta, parmesan, robust red wine, checkered tablecloths. This type of bold expression is what makes Italy and what attracts the tourist, the foodie and the art monger alike. One of the fastest ways to Italy while living in Salt Lake City is going to Caputo’s Market and Deli for an amazing night of food-and-wine pairings—known officially as Caputo’s Tasting Class. And a real foodie twist comes with their spirits-and-food-pairing classes, to boot.

Twenty-two years ago, a Utahn named Tony Caputo decided to bring part of his Italian heritage to Salt Lake City via the specialty-food market. Tony opened his market and deli with the intent to feature some of the best and obscure Italian accoutrements and charcuterie while serving the public satisfying sandwiches and cold pasta. About five years after opening, Tony started offering cooking classes, which turned into what their education program is today: a handful of diverse, interactive seminars available to the inquiring palate including Cheese & Chocolate, Tour of Italy, Whisky Wars and Wine 101.

“Tony’s classes were fun because you could see that type of fire-in-the-belly passion that comes from a lot of Italians,” says Adri Pachelli, Director of Education and Senior Manager at Caputo’s. “You felt like family.” Though Tony isn’t the primary teacher anymore, he has replaced himself with passionate employees and local adjunct authorities in the food-and-drinks business.

“It began with Tony, but Matt exploded the universe!”

“Our spirit classes are very popular,” says Pachelli. “We partnered with Matt Pfohl, Scott Gardner and Sean Neves (they opened and currently operate Water Witch Bar), who bring a fascinating element to the world of pairing spirits with food. They teach things that the average drinker just wouldn’t think about, and it has initiated a smarter way people are ordering and drinking cocktails.”

In addition to working with the Water Witch bartenders, Caputo’s hosts classes that focus separately on each spirit like rum, gin, scotch, mezcal and tequila. During these classes, they bring in local distillers like Waterpocket Distillery, Sugar House Distillery, New World Distillery and Dented Brick Distillery, demonstrating that the Utah spirit scene is gaining traction and growing.

Pachelli has worked hard during her three years as the Director of Education at Caputo’s. She tries to provide classes that answer what the market is looking for while offering a unique take on foods that add variety to the local palate. “Educating consumers on a different way to eat and drink has fueled the need for us to carry more strong and robust cheeses, and specialty tin fish like tuna, mackerel and sardines,” says Pachelli. “We also carry very unique and out-of-the-ordinary chocolates, spreads and potato chips.” As far as pairing spirits goes, classes often pair them with meats, cheeses and chocolates. Additional inclusions may well be a Fallot walnut mustard and cornichons (pickled gherkins) paired alongside pork rillettes, all with a Redbreast 12-Year Irish Whisky.

“Tony’s classes were fun because you could see that type of fire-in-the-belly passion that comes from a lot of Italians.”

“We try to frame the same methodology behind food-and-wine pairings to food-and-spirit pairings,” Pachelli says. “Texture and acidity are the first things I think of with wine. For spirits, we often start with texture and barrel influence. Something that has spent time in a barrel or has any added sugar often does well with the same things red wine gets paired with. Spirits that haven’t seen a barrel often do well with classic white-wine pairings. Of course, there are exceptions to those rules, but it’s a great place to start and test from.”

Since opening, Caputo’s has provided food items to the public that locals didn’t even know they wanted. Tony’s son, Matt Caputo has been influential in helping his dad expand their culinary repertoire. Matt pushed for their cheese cave located in their Downtown store, and Matt was also the first to linchpin Caputo’s fascination with chocolate. “SLC knows what good food is because of Caputo’s,” says wine broker Francis Fecteau. “It began with Tony, but Matt exploded the universe!”

“Food and drink isn’t just about fulfilling the carnal need to survive. It’s about appreciating and enjoying the pleasure of quality ingredients made with creativity and artistry.”

Matt holds a nationally recognized CCP title (Certified Cheese Professional) and has won multiple cheese competitions and specialty-food awards for the company. He also helped get the Utah Chocolate Society off the ground by allowing Caputo’s to become somewhat of a home for chocolate geeks to discuss, taste and learn about fine chocolates from around the world.

“Food and drink isn’t just about fulfilling the carnal need to survive,” says Pachelli. “It’s about appreciating and enjoying the pleasure of quality ingredients made with creativity and artistry. I feel like less and less people are going to bars to get trashed. They want to go to bars to experience a well-made cocktail, or have a nice glass of wine over some conversation and maybe eat a small bite or two.”

Like an exclamation point brings power to the end of a sentence, Italian-food and drinks cultures bring magic and splendor to the mundane. You may never have been to Italy, but you can still experience the romance right in your own backyard.

For spirits classes this month, there is a whiskey/brandy class at Caputo’s Downtown location on Oct. 8; a class Downtown on New World Distillery’s spirits on Oct. 12; and tequila and mezcal on Oct. 24 at their Holladay location. For more information on Caputo’s Tasting Classes, visit their website or walk into any one of their stores in the Salt Lake Valley.