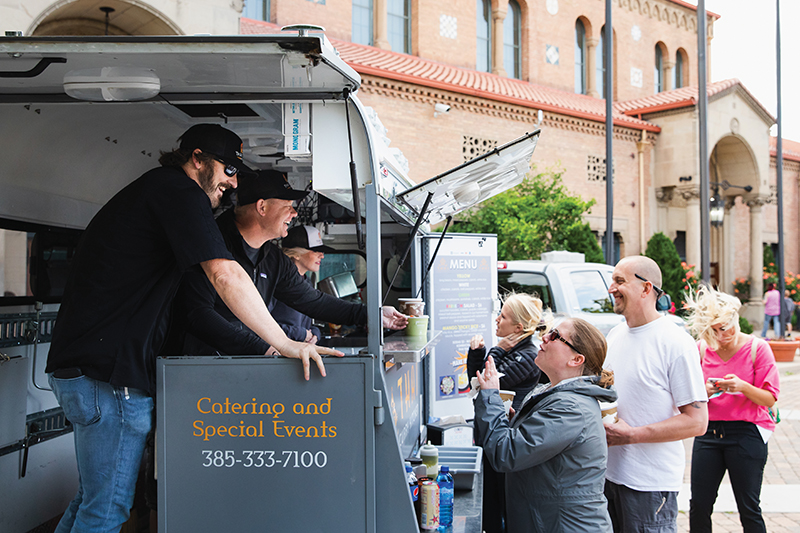 Ogden has been on the move. This small city has always had a closely-knit community that loves to come together for large public events in their historic downtown. Like many communities along the Wasatch Front, Ogden has seen great growth over the past decade. With growth, the city has only become more vibrant and bustling. If you find yourself meandering down 25th Street on the first Friday of any month, you’re likely to hear live music spilling out of a number of bars and venues that line the street, people wandering through the art galleries peppered amidst various restaurants and small local shops for the First Friday Art Stroll, and a general sense of familiarity among those walking among the aged storefronts. Included in the First Friday fare is Ogden’s Food Truck Rally at Union Station.

This sense of community and growing vibrancy Downtown on every first Friday is exactly how Steve Ballard, a fifth generation Ogdenite and owner of Thai Curry Kitchen and Sonora Grill, knew that Ogden was ready for its own regular food truck rally. “I think, for years, Ogden has tried to redefine its downtown and establish more restaurants—a scene has developed here,” he says. “I think this food truck rally gives people a reason to not feel like they have to leave Ogden to get something good to eat, or even for some of the people living in surrounding areas to come into Ogden.”

“One thing that sets this food truck rally apart is that this is done by food trucks. It’s not a third party or a management company that’s putting this on.”

Ballard opened his Curry Cart via a converted horse trailer two years ago and began working the food truck circuit serving up food from Thai Curry Kitchen. Steve says that at that point, “We realized not all events were made equally. For some events there is no one there and you don’t make any money, and other events you’d make tons of money.”

These rallies and events are where you can typically find food trucks when they aren’t parked out on the street during lunch hour. But Ballard explains that there are often fees associated with these rallies, which will ultimately cut into the overall profit for the truck, especially if it is a smaller event with no guaranteed crowd. “You don’t get much of a say in how many food trucks are available per person, so sometimes you’ll get like 12 food trucks and there’s maybe a couple hundred people, so it’s spread pretty thin,” Ballard says. “After navigating that, we started seeing our own need for a food truck rally in Ogden. We got together with the other food trucks, and I’d say one thing that sets this food truck rally apart is that this is done by food trucks. It’s not a third party or a management company that’s putting this on.”

Ballard and his fellow food truck collaborators found a home at the Union Station, which is located on the far west end of 25th street, on the first Friday of every month. It happens to coincide with Ogden’s First Friday Art Stroll, bringing people Downtown to wander up and down the historic block where the trucks park.

“No one’s trying to get rich. We’re just parking and doing what we love.”

By operating the rally independently, Ballard is able to make sure that all of the trucks are local. “Salt Lake has some awesome food trucks, and it’s really an incredible scene, but Ogden has a little less—less variety and less selection—so we thought one thing the Food Truck Rally could do is grow the food truck presence in Ogden by giving them a chance to make money and get their name out there. We almost exclusively get trucks that are based out of Northern Utah,” Ballard says.

Some regulars featured at the rally are Lucky Slice Pizza, The Rocky Mountain Burger Bus, World’s Best Corn Dogs and a regular rotation of drink and ice cream vendors, which are updated monthly on the Ogden Food Truck Rally Facebook page. “We try to limit one truck from each kind of food, so if someone wants a burger, sandwich or fried food, they have the option.” Alcoholic drinks aren’t in the mix just yet, but Ballard has hopes for the future.

As the rally grows, Ballard sees the potential for where things can go from here, “to grow from once a month to every Friday night,” he says. “I’m hoping Ogden City will come around to building some infrastructure for the food trucks, you know, container parks and food truck parks that you see that in every big city.”

Ultimately, Ballard’s final takeaway about the rally is that “the real emphasis is that this is a coalition of trucks,” he says. “We’re in charge. No one’s trying to get rich. We’re just parking and doing what we love.” For information about Ogden’s Food Truck Rally, head to their website.