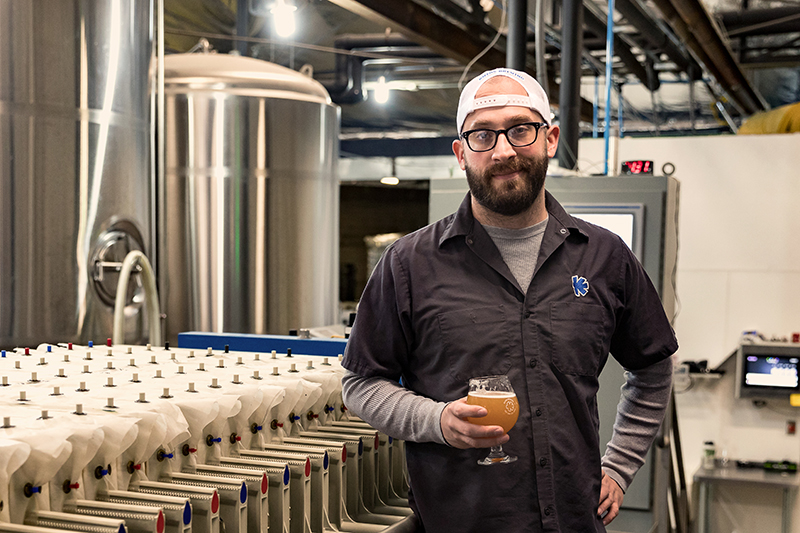 “Always look local,” says Clay Turnbow, the congenial home brewer–turned–Head Brewer at Kiitos Brewing. A minimalist, unpretentious yet ultra-cool oasis nestled amid a semi-dilapidated industrial park, Kiitos offers a cheerful gathering space for the love of the suds. Kiitos employs an environmental ethic across its operations, offering canned beers only via the use of the ultra-conservational High Efficiency Brewing System (HEBS), which utilizes 40-percent less water than traditional systems. Turnbow loves the outcomes the HEBS process has provided, especially the turnaround time for production. “Making the average beer takes anywhere from six to eight hours for the complete process,” he says. “Here we do it in about four, sometimes even faster than that.”

The brewery has made numerous tactical choices to minimize their footprint, which Turnbow discusses with a touch of passion in his voice: “The city doesn’t make it especially easy to recycle glass. It’s a lot easier to recycle cans. The beer tends to also age better in cans because of no light intrusion.” With regard to additional ways Turnbow plans to engage Kiitos’ “green” mentality, he says, “Something I’d like to get into right now is our tapping system. Right now, we’re at 10 and we’d like to go to 16. When we get there, I want to have a tap where we donate a dollar of every pour to getting electrical charge stations in our parking lot. We’re also trying to get the city to give us one of the GREENbike racks outside.” Turnbow indicates that Kiitos’ future expansions may include an outdoor patio and solar power for the space.

Kiitos’ current menu is resplendent with rich, fruity and downright luxurious flavors, including favorites Coffee Cream (made with local roaster La Barba’s Guatemalan beans) and Coconut Stout, which Turnbow intended to offer merely as seasonals but has made into fixtures due to demand. “There’s something here for everybody, and not necessarily the cookie-cutter-style beers,” he says.

Having had no formal education in brewing, Turnbow has curated these dynamic formulas through sheer time, effort and more than a touch of creativity. “All my experience comes from being a homebrewer for 10 years, then hands-on with Epic and 2 Row Brewing,” he says. “The out-there beers are what I like to drink. I like to find local ingredients I haven’t seen before. If I walk to the local farmers markets, I can find inspiration for a beer, or going to local coffee roasters. I’d really like to go foraging for juniper when it’s in season, and spruce tips.”

Kiitos takes risks with more than just their flavors. They’ve consciously elected not to offer their beers in local liquor stores due to the potential for unsavory outcomes. “It can sit in a warehouse for two months in 90 degrees,” says Turnbow. Turnbow’s craft and product is so meaningful to him that every step from concept to creation must be of supreme quality. Even the canning process is remarkably thought-out, with some of the new beers being offered in a “360” lid design that peels-off completely, creating an open top for the aromas and flavors to come forward fully.

In less than two years, Kiitos has already gained favor among the brewery community, from customers to comrades. In my afternoon at the facility, a regular flow of local beer groupies amounted to a nearly packed house on a Saturday afternoon, an impressive crowd for such a fledgling brewery. From within the rather intimate local-brewers inner circle, Turnbow attests that “the best compliment I can get is to walk downstairs to the tavern and see them in my brewery, drinking my beers.”

Lovers of the brew can look forward to a forthcoming collaboration with similarly creative Springville brewery Strap Tank. Distribution to Smith’s stores will come in addition to current placements at Whole Foods and Harmons. The Northeast IPA is Kiitos’ most recent offering, including the “360” can design. Additional seasonal offerings will soon drop, including their first classic pilsner lager, made with new American hops Mosaic and Equanot, available as the summer seasonal in May. “After the pilsner, I’ll use that same yeast strain to make seasonal lagers, including a traditional Oktoberfest for September and October,” says Turnbow. Occasional special events are also a part of the Kiitos brand, including the recent Ruby Snap collaboration for a cookie-and-beer pairing this past Valentine’s Day. On constant rotation at the tavern is a firkin every Monday night and beer infusions on Wednesday nights, set to the pleasant clang of vintage pinball machines and ’80s pop hits playing in the tavern. A comfy bar and ample seating area serve the tapped array of Kiitos’ specialties, including a vanilla-nut cream ale and blueberry sours, as well as a few Rico eats keeping bar bellies pleased. Kiitos gives back to the local beer culture in both their products and their process, a combination worthy of becoming one of your favorites.