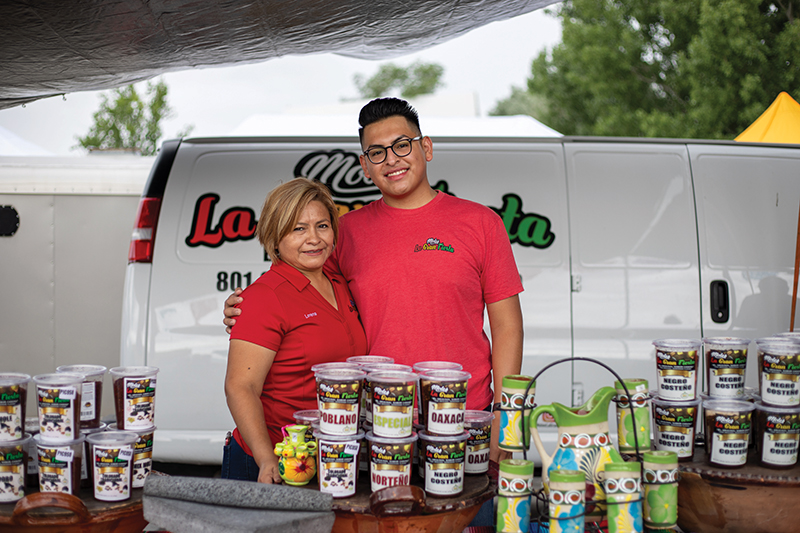 Six generations of secret family mole recipes from Moles La Gran Fiesta are a reason to visit this year’s Craft Lake City DIY Festival. They tout 32 hand-selected, fresh ingredients that make up the delicious moles that are packaged in a powder form, versus the typical paste usually seen in stores. The powder form of their product makes it easy for customers to make mole sauce in their kitchen. Just add water or chicken broth in a pan and simmer it together, making instant mole that tastes homemade.

Moles La Gran Fiesta started back in 1970 with the late Alejandro Cruz. The family-owned business—now run by Cruz’s wife, Lorena Jimenez, and three kids, Cesar Cabrera, Orlando Cabrera and Fatima Cabrera—offers 12 selections of mole ranging from sweet, mild and spicy flavors based on different regions of Mexico, such as Oaxaca, Mexico City and Puebla. With recipes rooted deep in family tradition, they are known for authentic culinary flavors most crave from traditional Mexican cuisine. Their most famous mole is the “Poblano,” which comes from the region known globally as a mole destination, Puebla. This specific mole has a sweet, tangy flavor to it, and it is also one of the family’s favorites because it combines a tremendous original mole taste that’s both spicy and flavorful in addition to its sweetness. While we don’t have their recipe—you’ll have to taste it for yourself—typically, Puebla mole ingredients include unsweetened chocolate, various chiles, cinnamon, spices, tomatoes and onions.

Discover Moles La Gran Fiesta at the DIY Festival, where you can meet the family behind this household staple. Moles La Gran Fiesta can also be purchased online at their site. Shipping is available to all states in the U.S., as it makes for great gift ideas. They also sell their mole every Sunday at the Redwood Swap Meet in West Valley City. They currently sell at all Rancho Markets and a variety of Mexican stores, including El Potrero Market, La Palapa Mexican Restaurant and more. –Mandy Murry