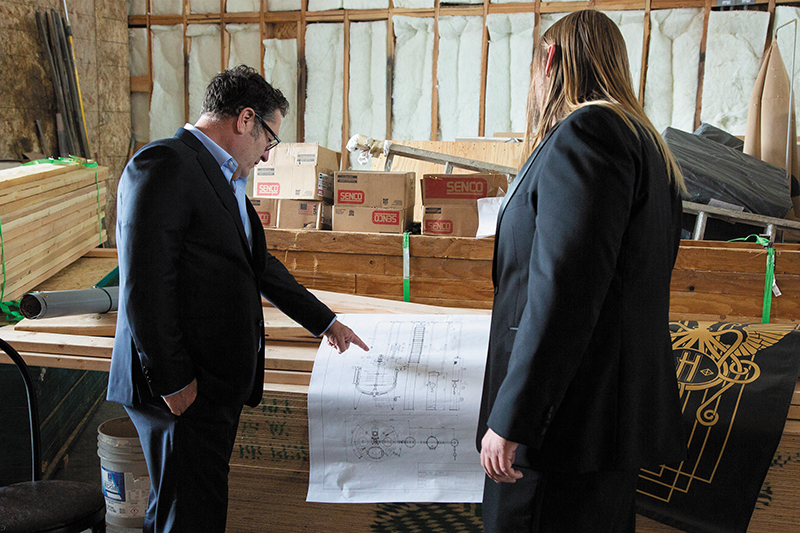 For Holystone Distilling, opening up shop has been a long time coming. “Everybody wants to know when we’re going to be open, when we’re going to have product for sale,” says Michael DeShazo, Co-owner of Holystone Distilling. “They’re excited for us, which is refreshing … The feedback has been positive.” With the goal of opening by the end of 2018 looming ever closer, Michael—along with the other owners of Holystone: his wife, Barbie DeShazo, and Head Distiller Ethan Miller—waits for the right permits from the federal government in order to start the distilling process for the spirits they’ll offer at their grand opening. Michael and Miller promise that it will be a standout experience for Utah.

Miller has an impressive amount of distilling experience from his time at Dented Brick Distillery and New Deal Distillery in Portland, Oregon, as well as being the founder and president of the Distillers Guild of Utah. He says that the future of Holystone Distilling will certainly be whiskey, specifically rarer malt whiskeys. However, since whiskey needs to age properly, Holystone will initially start out with spirits that require less time—vodka and gin. “We’ll have a navy-strength gin, which will be the first in Utah,” says Miller, who plans on providing a bold and distinctive offering right out of the gate that matches Holystone’s branding. “The reason they call it navy-strength is because they used to pour it on gunpowder and light it on fire. It has to be at least 114 proof to work, otherwise, somebody’s been watering down their gin,” he says. “We’re tied to the Navy, so it fits with our brand, and it’s a fun story to talk about.”

The Holystone name is steeped in maritime history, making the navy-strength gin a fitting first offering. The term “holystone” comes from the nickname given to sandstone used aboard ships to polish and scrub the wood of the deck. Holystone Distilling’s logo also uses the Bravo and Zulu nautical signal flags, naval symbols that mean “well done” when paired together. “I’m retired from the Navy, and I’m a big history buff, especially naval history,” says Michael. Michael’s branding emphasis on his experience in the Navy gives Holystone Distilling a unique twist among the growing list of distilleries in Utah. “We’re going to be very nautical in nature, geared towards the Navy and the maritime world.” The branding is prominent, with an eye-catching black-and-gold, ’20s-inspired, art-deco design and ocean theme, which certainly stands out in a land-locked state. “We’re taking it a little bit further with our style and being a little more bold,” says Miller. “We want to take [Holystone Distilling] into the future. We’re taking elements of the past, respecting tradition and bringing the future of the industry to Utah.”

Though Holystone Distilling’s branding has a maritime twist, Michael and Miller insist that the focus will be centered around Utah. As a distiller, Miller’s goal is for Holystone spirits to have a terroir, distinctive regional characteristics, centered around Utah. “I do believe in terroir in distilled spirits,” Miller says. “You’re creating a product using ingredients in an environment that’s local, so no one can mimic exactly what we’re going to be producing. On top of that, it’s our equipment, we’re the ones making it, we’ll have our own way and our own recipes, and, yeah, we’re locals.” One of the ways that Holystone Distilling plans on achieving this is sourcing ingredients close to home. Michael says, “We’re going to maintain a focus on Utah and that’s going to be our only focus for a while as far as marketing goes, as far as our customer base goes, and as far as where we gather our products from to make our alcohol.”

For both DeShazo and Miller, maintaining a local, approachable feel goes hand in hand with the fact that they, along with Barbie, are the sole owners and proprietors of the business. “There’s not going to be a lot of separation between us and the customer … You’re going to be talking to one of us,” says Michael. As far as the distillation process goes, Miller plans on experimentation as well as high efficiency with less manpower. He says, “The nice thing about the [distillation] process is that you can be really efficient with a small amount of people. I would say that’s whats going to make us efficient is that we’re the owners. We don’t have a whole bunch of people to answer to; we’ll be answering to each other and ourselves.”

Holystone Distilling will likely be opening in early November, permit permitting, in Murray on 207 W. 4860 South. Announcements for grand opening events can be found on Holystone Distilling’s Facebook page or at holystonedistilling.com.