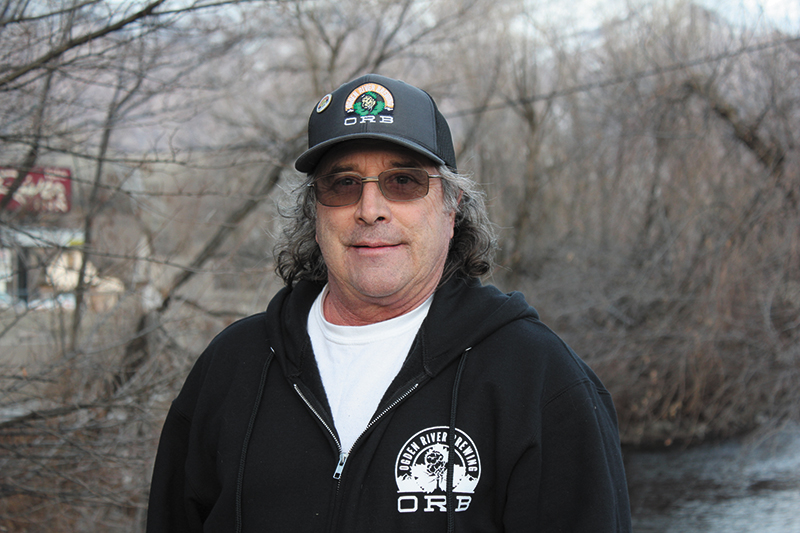 We were sitting in the corner of Slackwater, one of Ogden city’s premier watering holes, eagerly awaiting the arrival of Ogden River Brewing mastermind Pat Winslow. Making his sly yet deliberate entrance, Winslow quickly whisked us out the back door. Located west, a mere football field away, along the south side of the Ogden River, is a vacant field. We haven’t seen such excitement projected on an empty lot holding lumber for nearby construction in a long time. This is the future location of Ogden River Brewing, and it’s a good one.

Never one to go with the flow, Pat ignored initial advice not to do it. “That’s the wrong thing to say to me,” he says. “It sets my mind. If someone tells me not to do something, I will show them.” Instead, he is focusing on “Plan, plan, plan. You need to have a good business plan and stick with it. You’ve got to be flexible because things happen. But plan for success. If you fail to plan, you plan to fail.” Initially, Winslow thought of a small, laid-back tavern where you can bring your dog, sit outside, shoot the breeze and have a good time. A tavern that he projects will measure 5,000-plus square feet is a welcome compromise. He hopes to start digging next month and have the whole operation running by September.

Winslow, a retired railroad worker, has been competitively brewing for over 12 years. His big “aha” moment came in 2014 when a Super Bowl commercial showing a burly guy declaring, “I love my job. I make beer and I taste beer,” pushed him toward the craft. “I want that job! That’s kinda where I got the idea,” he says. “I like making beer.” He attended a course in brewery management to learn the financial and business side of brewing. During the class, the crowdfunding platform Kickstarter came up as a way to help raise funds to get his business boiling. This idea involved bringing in the community, which is exactly what Winslow planned. “People need to feel part of the project,” he says. His goal was to raise $25,000 donated within 30 days from family, friends and complete strangers who believed in his dream. “I planned to do an announcement at the same time as my retirement party,” he says. “I launched it that night and invited everyone I knew. At my party, there were 21 different taps in three different [beer] stations—all my own beer, including a sour station with seven taps. We went through about 75 gallons.”

The campaign was not a slam dunk by any means. “It was a humbling experience, because people that I didn’t know came out of the woodwork donating large sums of money,” Winslow says of the experience. Nearing the goal deadline, contributions tapered off. “I was about two days away

from the end of my goal with $24,400 in or something like that, and it just kind of stalled out.” With Kickstarter, if the goal isn’t met in the allotted time, donated funds return to contributors. If the fundraising campaign failed, he would need to regroup to get his endeavor back on track. Then, just two days before the cut-off date, a surprise last-minute backer pushed him over the top. “Out of the blue, this guy sends me a text and says, ‘Watch this,’ and he donated 1,500 bucks.” This was a huge breakthrough. “That put me over the top,” he says. “I bawled.”

Winslow is known in the home-brew world for his adept ability to deliver excellent beer, regardless of the style. He is especially known for brewing award-winning, spontaneously fermented beer. This is a sour style of beer that has a long-dated history. For the time being, Winslow will to put the sour program on the back burner, choosing to focus on getting the whole operation up and running. Regarding his plans to bring out these beers in the future, he is resoundingly positive. “Yes, there are plans for this,” he says, smiling eagerly. Wild yeast beers are clearly a passion

for Winslow. “I’ve won medals for beers in which I harvested wild yeast from my backyard. Sour beers really are where my brewing heart is. Right now, there just isn’t enough space for manufacturing due to city code.” In the future, Pat wants to build another place to do sour beers and we look forward to when he gets to fully envelop himself in this style.

Ogden River Brewing (ORB) expects to initially launch six beers. These will include a flagship smoked Rye IPA and American pale ale, one he has been brewing since his early days. The tavern will not only offer Winslow’s unique take on premium craft beer, but flavorful barbecue, too. We admit that our mouths watered when he said he is working on a smoked pulled-pork breakfast burrito with smoked chile verde and brisket hash. You read that correctly: ORB will also be open for breakfast.

Another exciting reason we love craft beer is displayed through the vision of Ogden River Brewing. It brings communities together to share experiences and to build friendships. Winslow’s dream resembles many of our own. ORB should open by the end of 2018,  giving the people of Ogden and Salt Lake City a place to come together. To connect now or to find exciting news and updates, visit their website or their Facebook page (facebook.com/OgdenRiverBrewing). We look forward to hanging out with you along the river!