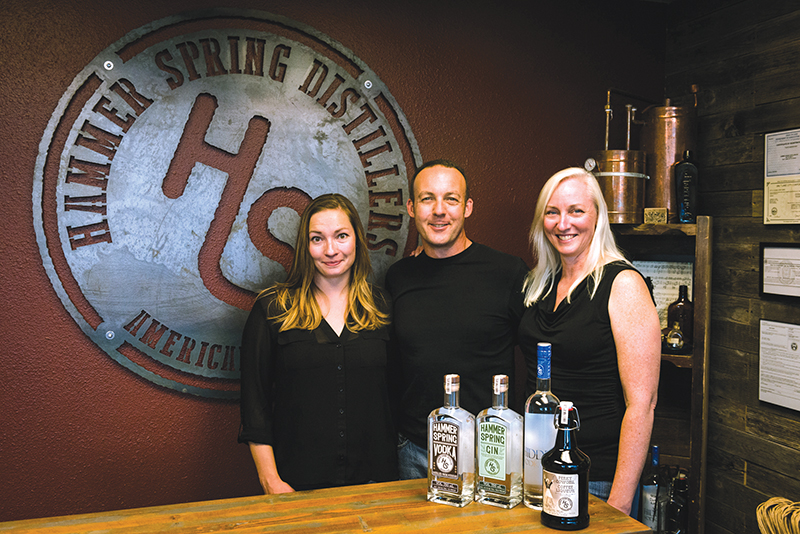 When I received my Local Spirits Issue assignment, I expected to talk about different liqueurs that Hammer Spring is working on, the distilling process and to get a really cool tour of the actual distillery. What I didn’t expect is to talk about potatoes and pancake syrup. JP Bernier, the founder, owner and Head Distiller at Hammer Spring Distillers, has shown me the unexpected and left me in awe of potatoes—potato vodka, to be specific. Bernier is excited to talk about his Hammer Spring Vodka, which consists of two main ingredients: potatoes and yeast. Hammer Spring is the only distillery in the state making true potato vodka and one of the few distilling it in the country.

I was surprised to learn that potato vodka isn’t actually the norm. I had naïvely concocted a romantic idea of Russian potato farmers blissfully working away in their potato patch, eagerly awaiting a pull of vodka to warm their bellies and leave them feeling satisfied after a hard day’s work. That is all wrong. These days, much of the vodka that is produced is made from fermented grains. Much of what you get off of the shelf in your local state-run liquor dispensary is made this way. According to Bernier, this leaves little variance between common brands—much of the variance actually comes from the label on the bottle rather than the flavor of what you’re drinking.

Hammer Spring makes a grain-based vodka called Hidden Vodka, which Bernier attributes to helping pave the way for their craft products. “We realized that there is some benefit to distilling this way, in that you can make it quickly for a decent price,” Bernier says. “It helped us pay the bills while we worked on our craft vodka.” After getting a boost from Hidden Vodka, Bernier now sees this more easily mass-produced product as an opportunity to give back. A percentage of all Hidden Vodka sales benefit organizations combatting human trafficking.

Bernier takes full advantage of using one vodka to sell the other as well—if you visit him at the distillery, he’ll gladly take you on a tour and let you try some samples. For my sample, he says, “I always start people off with the Hidden Vodka so you can taste the difference between the two. It is a great mixing vodka that goes well in a cocktail because it has a nice neutral flavor and works well if you don’t want a lot of personality—it is smooth and easy to drink.” I can now attest that it was delightfully smooth, and I quite enjoyed it on its own, and I can only imagine the trouble I could get myself into with a proper mixed drink. Bernier then moved on to the Hammer Spring Potato Vodka. “The difference is immediately clear, even as the smell hits your nose before you taste it.” While the two vodkas were the same proof, the Hammer Spring had a much fuller, voluptuous flavor that was much more engaging. While it did have a subtle bite, it still went down smoothly and wasn’t as viscous as I’d heard other potato vodkas described. Locally sourced potatoes are processed in shop, where Bernier has equipment uncommon to most of the distilleries I’ve seen: a giant machine that scrubs and strips the peel off the potato and a large, industrial grinder used to turn the potatoes into a fine pulp, which is then fermented, distilled and bottled.

As you browse the Hammer Spring Facebook page, you’ll find a nice tribute: “Hammer Spring Distillers thanks the hardworking explorers and adventurers who discovered and settled the Great American West. Our hat is off to them, along with the miners, soldiers, cattle ranchers and other brave folks!” Bernier says “We feel a bit like pioneers ourselves.” “Being the only potato vodka distillers in the state, we spend a lot of time out knocking on doors, educating bars and restaurants about our products, and we want to pay tribute to those who have made difficult journeys themselves.” Pushing the potato vodka hasn’t gone as easily as selling their Hidden Vodka and Hammer Spring Gin, which have both been picked up by the DABC and should be available in state liquor stores by the time this story goes to print.

While the potato vodka is one of the more unique products at Hammer Spring, they also offer Hammer Spring Gin, which Bernier says “captures the essence of Utah wilderness in a bottle” with hints of juniper and mountain sage. If you like to start your day with an eye-opener, Hammer Spring also has your breakfast covered with their Perky Cowgirls Coffee Liqueur. Made with Millcreek Coffee Roaster’s beans, the Liqueur is sweet with a strong espresso taste and is wonderful in your coffee or over ice cream, and Bernier swears it makes a killer tiramisu.

What is a tasty, boozy cup of coffee without some pancakes? Hammer Spring also offers JP’s World Famous Whiskey Pancake Syrup, which I haven’t been able to try yet. Aged in whiskey barrels, JP’s syrup came about while Bernier was working as a volunteer paramedic at Burning Man. While making a big pancake breakfast for his volunteer crew, he spontaneously mixed some whiskey into the syrup he was preparing. It was an instant hit among the volunteer paramedic crowd, and was soon in high demand. You can find JP’s World Famous Whiskey Pancake Syrup at Boozetique in Salt Lake City, The Store in Holladay and at the distillery. Hammer Spring‘s Potato Vodka can currently only be found at the distillery, along with his other spirits, but Bernier hopes to see it picked up by the DABC and widely available throughout the state.

You can find info about Hammer Spring Distillers on their Facebook page, Instagram and their website, hammerspring.com, which is currently under construction. Bernier is more than happy to show you around the distillery and offer you tastes of all they have to offer: Call to make an appointment at 801.599.4704 or drop in during business hours at 3697 W. 1987 South in Salt Lake City. Hammer Spring Distillers will also be at SLUG Mag’s Brewstillery on Nov. 17 at the Union Event Center.