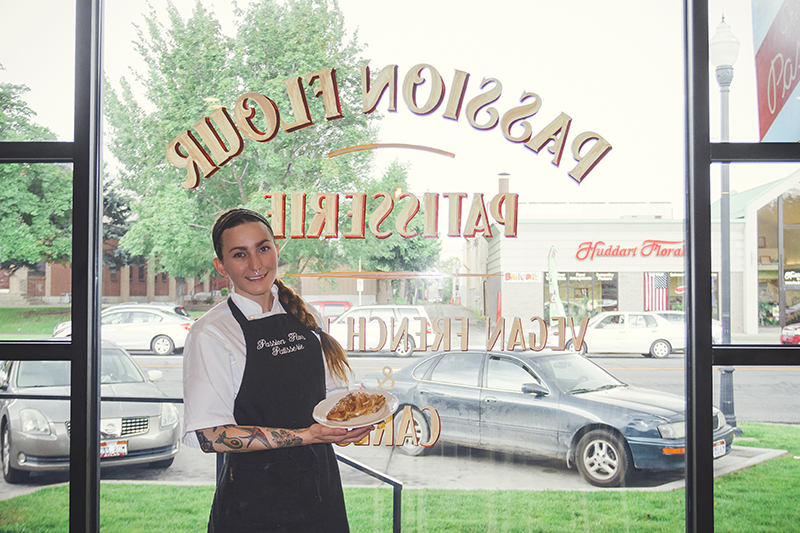 Jessica Davies, a classically trained French pastry chef gone vegan, has brought high-end vegan pastries to Salt Lake City’s dining scene. Located at 165 E. 900 S., Passion Flour Patisserie is a charming shop, the type of place where you could lose yourself in a leisurely afternoon, nose in a book, enjoying a cup of coffee and nibbling on French pastries.

A classic red-and-blue sign promising “Vegan French Pastries and Cakes” welcomes visitors. If you’re not looking for it, one wouldn’t necessarily notice the word “vegan” on the sign or window. And well enough, customers have stumbled into her shop and enjoyed butter- and dairy-free pastries with cups of coffee, none the wiser. “Everybody said, ‘Do not put vegan on your window and sign,’” says Davies. “I obviously ignored it.” While veganism is a strong force behind the shop and is important to Davies, one certainly doesn’t have to subscribe to vegan ethics to enjoy the pastries and Blue Copper coffee they serve. “I don’t just want to just make things vegan,” says Davies. “I want to appeal to people who aren’t vegan.”

The moment one opens the glass door and walk inside the shop, eyes jump to the pastry cases, filled with a dreamy assortment of colorful goodies. The interior of the shop is elegant, with rich, tan walls and beautiful hardwood floors. Fresh flowers decorate each table. The decor, simple and understated, makes one feel like they’ve escaped Salt Lake to spend an afternoon in a real French patisserie.

Davies’ croissants are magic—breaking the croissant open to find layers of tender pastry covered with impossibly crispy ends is a pure joy. Each flaky bite is full of a decadent, buttery flavor. The classic croissant ($4.25) is a familiar golden bronze with layers folded into a crescent shape. After that first bite working your way through luscious, chewy layers of croissant, there’s no hint that it’s vegan. Fancier stuffed croissants ($6) include Pain au Chocolat (filled with heavenly dark chocolate) and the popular Croissant aux Amandes, filled with fluffy almond crème and topped with sliced almonds and powdered sugar. Rich and sweet (and again—no hint that it’s vegan), the Amandes Bleu is filled with Blue Copper–espresso-infused almond crème. The prices are a bit higher than at other bakeries, but you get what you pay for. Passion Flour Patisserie makes everything from scratch with organic, non-GMO ingredients, and each batch of croissants takes three days to make—a meticulous process of folding the pastry and waiting for it to rise.

Other pastries include elegant, twisty Palmiers ($2.75), gorgeous fruit tarts ($5.75) and St. Horns ($5)—croissants filled with sweet vegan ricotta. Smaller treats include lemon-flavored madeleines ($1.50) and delicate macarons with intriguing flavors like Lemon Strawberry and Lavender. Each macaron is only $2 and gluten-free. Light, airy and melt-in-your mouth decadent, the macarons are every bit as scrumptious as the ones sold in bakeries around town. The only discernable difference is that Davies’ vegan version, free of additives, is a pretty, white color, unlike their brightly colored counterparts.

Davies always knew that she wanted to be a chef. “In high school, I took off-campus classes in all aspects of restaurant life—including restaurant management and becoming a chef and a pastry chef,” says Davies. After high school, I attended the French Pastry School in Chicago, where I studied under world-renowned chefs.”

After graduating, she moved to Hawaii and became an ethical vegan, eschewing animal products in all aspects of her life—food, clothing and everything else. Decorating cakes at a popular bakery in Hawaii, Davies longed to indulge in something sweet, but everything in the bakery was made in the traditional way, with eggs and dairy. Determined to create a perfect vegan version of croissants, Davies spent her downtime in the kitchen, perfecting her croissant recipe to crispy, flaky, vegan perfection. It took three years. “My friend Sophie, who currently works in the shop, would come over and help me,” says Davies. “That’s what we did in our free time. I started with small batches. I knew it would be a complete failure the first time. I was very picky. The croissants needed to be buttery and flaky.” After impressing her dad (the ultimate vegan skeptic) with her version of the pastry, she knew she had a winning product.

Perfecting the vegan pastry was her first obstacle—her next, following her dream of opening a vegan patisserie in downtown Salt Lake City. “I applied for a loan a year ago,” Davies says. “It was a huge process. I had discouraging things said to me. Being a young, female entrepreneur is not easy.” It was when she met with Zions Bank that she felt that she was taken seriously. Through a program for female entrepreneurs, she finally secured her loan. “It was frustrating at first, but it was nice to push through that frustration and find Zions,” says Davies. “They helped a lot.”

Passion Flour Patisserie is a unique (and delicious) addition to the already diverse vegan food options in Salt Lake City. At only 24 years old, the future is bright for Jessica Davies. With her impressive pastry skills, perseverance and passion, she is going to be a force in Salt Lake’s dining scene.