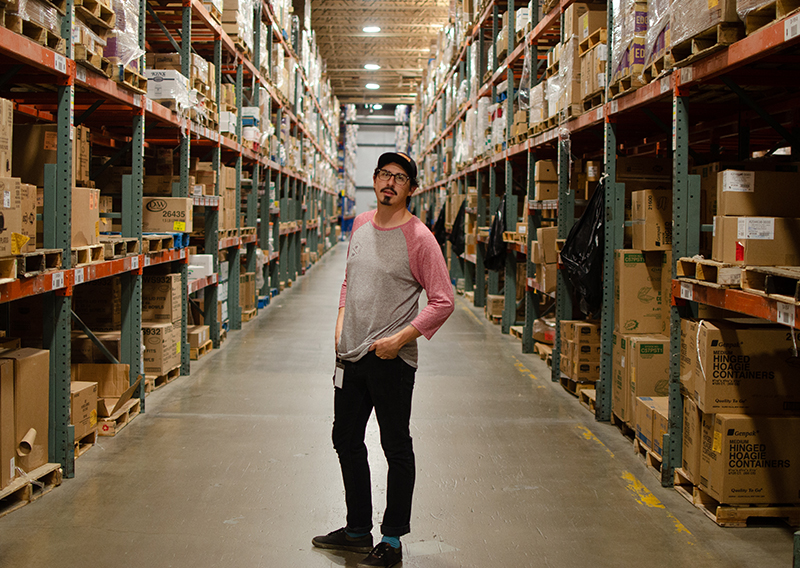 Philotimo for Local Food: Richard Cardenas of Nicholas and Company

“We’re a huge part of the dining scene,” says Richard Cardenas, Creative Director of local food distributor Nicholas and Company. Nicholas and Company provides food distribution to the Intermountain West, tracking food trends and bringing them to local restaurants through their monthly publication, Foodtrends. From serving small, independent restaurants around Salt Lake City, to the award-winning Hell’s Backbone Grill in Boulder, Utah, to chains like Arctic Circle, Nicholas and Company has been Utah’s own food-service supplier for the better part of the past century.

Nicholas and Company was established in 1939 by Nicholas Mouskondis. He was an immigrant from Crete who started his company by buying cans of food that were dented, re-labeling them and selling them on his bread route. Mouskondis was 17 years old when he came over from Greece by himself with nothing but a sign on his back that read “Utah.” He established himself as a successful, savvy and generous businessman in the Greektown neighborhood. He eventually grew his business from a bread route to a grocery, then to a large-scale food-distribution operation. Today, Nicholas and Company serves restaurants, schools and hospitals in a dozen states around the West and Midwest. Chances are, if you’ve enjoyed a meal at a restaurant anywhere in Utah, you’ve come in contact with Nicholas and Company in some capacity.

For Cardenas, the reason behind Nicholas and Company’s success for 80 years comes down to the deep roots the company has laid down in Salt Lake City. “The CEOs, Peter and Nicole Mouskondis, love the dining scene and being a part of it. They want to keep [Nicholas and Company] family-owned,” he says. “Only 11 percent of restaurants make it past the five-year mark, so we do everything we can to keep that going.”

The company’s mission is encapsulated in one Greek word: philotimo, which translates to “the love of honor.” For Cardenas, Nicholas and Company tries to uphold philotimo by taking pride in Salt Lake City and the local dining community. In the spirit of their founder and namesake, Nicholas and Company is actively involved in supporting local restaurants and businesses, having teamed up with local affiliates such as Utah’s Own and Local First Utah, as well as making considerable donations to the Utah Food Bank.

Cardenas, who designs and creates content for Foodtrends, has received positive feedback from local restaurants who appreciate the recipes, stats and other ideas put forth in the magazine. Foodtrends is part catalog, part eye-catching recipe book that also highlights and advertises local restaurants through their partnership with Dine Utah. “Veganism is pretty nationwide,” Cardenas says. “Smaller restaurants are more focused on [sustainability] because they’re more niche. They’re the ones trying to be more sustainable and plant-based. We’ve been told that Foodtrends is really helpful to a lot of local restaurants. We really want to help them grow. We want to help them get the food [we] diners want.”

“We’re not just doing this because it’s sustainable—we’re trying to feed people, and the meat industry isn’t going to be able to do that alone.”

One industry trend that Cardenas and Nicholas and Company are paying attention to is sustainability, particularly through the vegan and plant-based markets. Cardenas has noticed how plant-based foods and sustainable products have dominated the restaurant industry recently, a trend he doesn’t predict will change any time soon: “[Veganism] is not a trend anymore; it’s here to stay,” he says. Even though Cardenas considers himself a “flexitarian” and still eats meat, he admits that learning about food sustainability through his market research at Nicholas and Company has made him rethink how often he consumes meat in his personal life.

Nicholas and Company, which works with vendors such as Before the Butcher and Impossible Foods, has taken note of the increased competition in the plant-based food market. “The president of Before the Butcher said, ‘How are we going to feed 9 billion people in the next 10 years?’ We’re not just doing this because it’s sustainable—we’re trying to feed people, and the meat industry isn’t going to be able to do that alone,” says Cardenas.

For Cardenas, Nicholas and Company’s success rides on the concept of philotimo: their pride and involvement within the local dining community, as well as trying to stay on top of the latest food trends, such as sustainability and veganism, to offer to local restaurants. “[Nicholas and Company] cares about relationships. We reach out. We’re always checking up on the restaurants,” says Cardenas. For their 80th anniversary, Nicholas and Company is running a promotion for anyone to take a selfie with the “Chef Nicco” logo as well as following them on Facebook and Instagram with the hashtag #wheresnicco for prizes. For more information on Nicholas and Company, as well as to read current and past issues of Foodtrends, visit nicholasandco.com.

Celebrate the Bounty 2015: Local Food is Happy Food
Taste of the Wasatch: Food, Fun and Fundraising