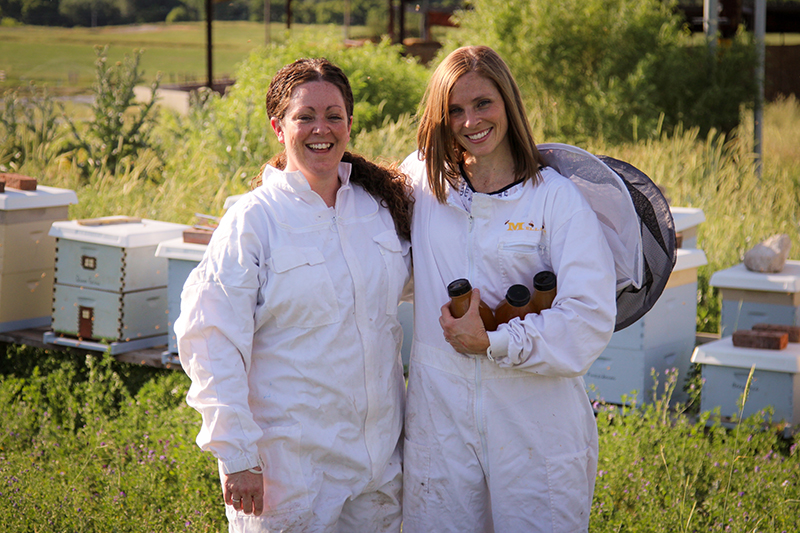 Queen Farina, purveyors of raw honey and honey-based products, began as a scheme to keep Aubrey Johnson’s kids busy. “My sister called me up one day and said that she was trying to think of something to get her kids involved with to teach them the value of work,” says Gina Nielson, Johnson’s sister. Johnson suggested beekeeping, so the sisters and their families pitched in on a couple of hives and set up a bee field in Cache Valley, Utah, where they live. Last year, after a couple of years of successful honey production, Queen Farina became an official business, named after their mother’s maiden name. They now boast 36 hives and sell a lineup of goods, including creamed honey, handmade balms and beeswax, in addition to straight-up raw honey.

Each of their 36 hives is run by its own queen bee, and every queen has a name, such as my personal favorite, Queen Freddie Mercury. The names are picked by the sisters and their families, or by backers in their Adopt-A-Hive program—individuals pay $50, get to name their hive’s queen, and receive a whole frame of raw, capped honeycomb at the end of the season.

Unlike the commercial, processed stuff, Queen Farina’s honey is raw and certified naturally grown—it is unpasteurized and produced on land free of pesticides, herbicides, fungicides and synthetic fertilizers. They don’t treat their hives with antibiotics, and the honey itself is untreated and unprocessed, aside from a light straining. “All we do is clean it enough to remove large chunks of wax or any bee parts,” Nielson says. “Honey naturally has a lot of enzymes and anti-microbial properties. It’s a pretty whole food. When you pasteurize it, you destroy a lot of that.” Since honey is naturally shelf-stable and will keep indefinitely, such treatments are purely cosmetic—to prevent the honey from crystallizing, which naturally happens over time. Queen Farina takes advantage of this property by force-crystallizing their raw honey for their spreadable creamed honey.

At the Craft Lake City DIY Fest, Queen Farina will have tiny, 2-oz. jars of this creamed honey, aka Honey Chasers, plus bulk raw honey, handmade honey dippers, beard balm and mustache wax and more. If stocking up at the CLC DIY Fest isn’t enough, visit queenfarina.com to adopt your own hive.