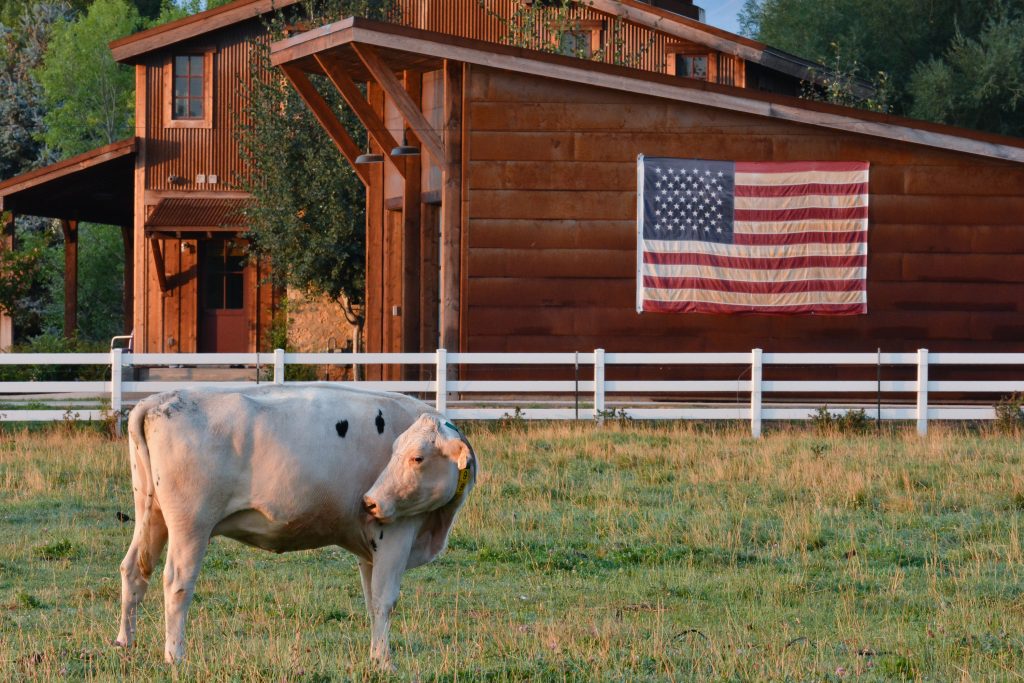 As the communities of Midway and Heber continue to grow, a family-owned and -operated creamery is also changing. Heber Valley Artisan Cheese, set in the picturesque fields of Midway, has been in the cheese industry for seven years, and they are upgrading their farm—without losing the charm of the red barn and black-and-white-spotted cows in the fields. While they are relatively new to the cheese industry, their farm was originally built in 1929, and they are now four generations strong on the same land. Combining two passions in 2011, the Kohler family (with father Grant Kohler and son Russel Kohler at the helm) set out to take their commitment to producing the highest-quality milk into making beautiful cheeses. As one of only a few farmstead cheese producers in Utah—as well as (potentially) one of only two that are making raw-milk cheeses (the other definite one being Rockhill Creamery)—the folks at Heber Valley Artisan Cheese are not taking the easy path to success. They have won several national awards in the last few years, as well as a Best in Class at the inaugural Utah Cheese Awards in 2017, and rather than ride that success, they are investing back into their farm by building an all-new milking parlor and nursery for their sweet Holstein herd.

In 2017, the creamery was the recipient of a grant from Harmons Neighborhood Grocery, which they are applying to upping their web presence through installing live webcams that show the farm and “the ladies” behind Heber Valley Artisan Cheese. It will offer a behind-the-scenes view of the day-to-day at a farmstead creamery, and will help educate the public on the importance of being a farmstead operation.

There are specific requirements to garnering the title of “farmstead.” As per the American Cheese Society, “Milk used in the production of farmstead cheeses may not be obtained from any outside source.” The animals must live on the same property that the operations (aka the creamery) reside. By only using milk from this single source, the cheese will have a flavor specific to that land—the terroir that helps establish the uniqueness of the flavors in the cheese. Heber Valley Artisan Cheese also takes it one step further: They make several cheeses using raw milk. The term “raw milk” means that the milk is not pasteurized, which is the stabilization of a food through a combination of heat and time at a ratio deemed to ensure that any pathogenic bacteria are destroyed. Most milk is pasteurized, not only because it’s produced in extremely large quantities, but also because it needs to be transported and last longer. The production process of the raw milk doesn’t carry these same risks. (Shoppers can actually buy fluid raw milk at Real Foods in Salt Lake City, after signing a waiver acknowledging that they know the potential risk involved with consuming raw milk. More than a few cheese scientists argue that cheeses made with raw milk have a greater potential for flavor development, as certain vitamins and minerals in the raw milk are not cooked off during the pasteurization process. Additionally, the naturally occurring enzymes in the milk that aid with digestion are kept intact. Cheeses made using raw milk are held to a more stringent set of rules for production and, by FDA law, must be aged a minimum of 60 days before being made available for sale.)

In addition to being recipients of this grant, Heber Valley Artisan Cheese also broke ground on an all-new milking parlor and nursery in 2017. The new milking parlor went live at the end of June and features state-of-the-art robotic maintenance, which includes a 1,200-pound Roomba-like robot that pushes the feed closer to the paddocks; a wedge-shaped device that clears the pathways of debris and waste; high-end, yoga-mat-quality padding for each stall; and even six motorized brushes that the cows love to use to scratch all of those hard-to-reach spots. Each cow sports a high-tech collar that, as Russ says, “provides more information than a FitBit ever could” about the cows’ daily activities. Going beyond her daily vitals and steps taken, it also includes data from how many times she chewed her cud, the number of visits she paid to the self-milking stalls and what her output was per visit. These collars give in-depth information about the cows and enable their handlers to take even greater care of the animals. Visitors who walk along the paddocks will observe that these girls are quite content—many of them lazily lie in their favorite padded stall, chewing on fresh feed.

Once the nursery is completed, the newborns and the younglings that are freshly weaned will all be under the same roof. Newborns will have access to food at their leisure, as opposed to scheduled feeding times, while also being socialized into the herd lifestyle.

Visitors are welcome at Heber Valley Artisan Cheese, and the farm is available for events, which can include family reunions and retreats, as well as the Swiss Days Festival around Labor Day. They don’t stop there—the creamery holds cheese-tasting events at the farm on the second Friday of every month! Interested parties can email [email protected] or call the front office at 435-654-0291.

“You have to be a romantic to invest yourself, your money and your time in cheese.” —Anthony Bourdain