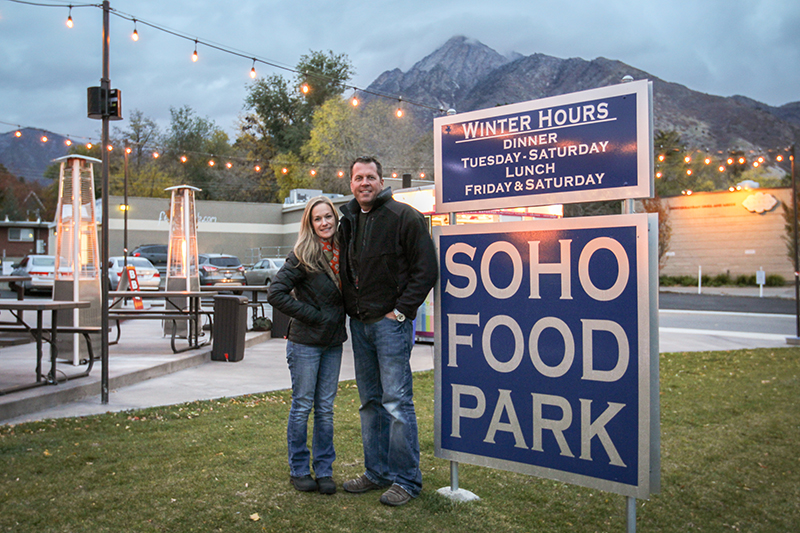 Soho Food Park: Get the Truck Over Here

Whether it’s driving out to a business park by the airport or a dimly lit parking lot in South Salt Lake, I’ve chased down my share of food trucks. Indeed, part of a food truck’s appeal is hopping on Twitter to see where and when your favorite mobile food purveyors are going to be doing business, and then undergoing an epic pilgrimage to show your support. Now that Utah is entering a new level of food truck street cred (did you see that Provo’s Waffle Love almost won the grand prize on Food Network’s latest Great Food Truck Race?), it’s time to start accommodating Utah’s wheeled meal-dealers.

To this end, Holladay residents Shelly and Mark Olsen have opened Soho Food Park in the heart of their beloved city. “We traveled around the country for the last five years just trying food trucks, and we realized that some of the best food in America is served on these trucks,” Shelly says. “We wanted to create a destination where no matter what night it was, there would always be a great lineup of food trucks.” With Shelly’s background as a culinary student in France and her current role as a specialty food buyer and Mark’s origins in real estate development and architecture, the food park was a natural marriage of their combined expertise. “We just felt like Holladay was struggling a little bit, and that’s where the developer in me came out,” Mark says. “It took nearly three years to change the ordinance to allow food trucks in Holladay. After that, we bought the property from the city, went through the approval process and here we are.”

Soho Food Park opened in July of this year with huge, find-a-seat-if-you-can success. “The park has a full set of tables, but there was barely room for people to sit on the curbs,” Mark says. With a lineup like theirs, it’s not difficult to see why—trucks like Chop City SLC, Cubby’s Chicago Beef and the aforementioned Waffle Love call the food park home. In a given week, it’s possible to sample around 30 of our local trucks, all of which have been screened and approved by Shelly. “To get invited to the food park, the trucks have to be operated by people who are artists of their craft,” she says. “Whether it’s ramen or a burger, I want them to have passion about it. I want them to have pride in what they’re doing.”

Despite the cold weather that’s upon us, Soho Food Park will remain open during the winter—but that doesn’t mean that diners need to be uncomfortable. “We want to create the outdoor experience that you typically see at a resort,” Shelly says. Thirty percent of the tablespace will be converted to accommodate pyramid heaters, and trucks will also be offering signature soups and stews to warm up those who come for dinner. In addition to their dining setup, the food park employs a full waitstaff that busses tables, keeping things tidy in between guests. It’s also worth noting that the colder weather is a great excuse to try some of Mark’s signature hot chocolate—a creamy, comforting blend of white chocolate, whipped cream and a drizzle of raspberry syrup.

The ideal visit to the food park should happen with at least one companion. It’s not often that dinner comes from so many different culinary backgrounds, and it’s important to bring someone to share the experience. I visited the food park with my wife, and our test run of the evening’s lineup was spectacular. We started with some Sweet Potato Fries and Chipotle Fry Sauce ($3) from Cubby’s Chicago Beef. It’s a generous satchel of crinkle-cut fries, but it was the dispensers filled with gourmet sauces that made our appetizer special. Next up was the Soho Special ($9) from Fiore Wood Fired Pizza. It’s the type of pizza that one would typically get in an Italian bistro—the thin crust perfectly cooked with just a little bit of char on the edge, gooey medallions of fresh mozzarella and crumbled sausage topped with fresh basil leaves. The unexpected win of the visit came from Chop City SLC, whose Cuban Sandwich ($9) recently took home an award at this year’s state fair. It’s got all of the crucial Cuban fare—roasted pork, ham, Swiss, mustard and pickle—but they add their own flair with a sharp and herbaceous cilantro chimichurri. It’s a meal of a sandwich, but we still had room for some of Q4U’s famous Ribs ($9 for three). These are big, beefy and coated in Chef T’s nationally recognized sauce.

Reflecting on our bounteous dinner, I realized that we effectively traversed a whole spectrum of food, all within 10 feet of one another—and that’s the real beauty of Soho Food Park. It’s a place where vastly different culinary perspectives can occupy the same space while people from all over the state sample each different menu. “To me, it comes down to having a nice diversity,” Shelly says. “We’ll have families come down here and get something from each truck and sit down together—we’ve learned that people are just drawn to other people.”