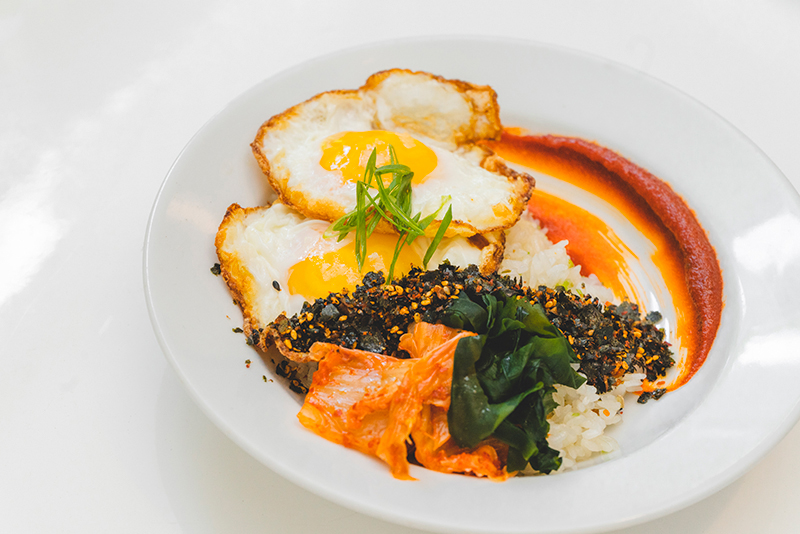 The Dayroom: Fighter of the Night Room

Tao says, “The natural person desires without craving and acts without excess.” This is one of those mantras that holds true to just about every plane of living in a genuine human existence. The only beef I have with that mantra, however, is that it doesn’t account for our affinity for stunning patios and meticulously cooked meals. It’s in this same logic that we keep coming back to The Dayroom time and time again for the necessary brunch over-indulgence.

For just shy of a year, The Dayroom has shared  the building space made famous by Em Gassman, Em’s Restaurant. Talking with Head Chef Milo Carrier last winter as he was beginning to realize his dreams, he tells grand tales of what’s to come. He confides that he intends to put an off-hours brunch restaurant into an already existing fine-dining space, all while sharing the same kitchen and promising like a madman that it would be both viable and profitable for both parties—he was right.

Walking into The Dayroom is exactly like being invited to coffee at your friend’s cottage in the Avenues. This remodeled landmark house is humble, warm and unpretentious, with a shady patio obsessively doused in grapevines. The spectacle is centered around an all local, homegrown, homemade and low-impact food card that oozes as much elegance as it does simplicity. The same rings true for The Dayroom’s immaculate espresso bar, which  boasts a full bar and the option to add CBD to any beverage ($3).

Jumping headfirst into brunch mode, a huge staple for The Dayroom is their house-made yogurt. That knowledge internalized, a Peach Lassi breakfast cocktail ($8) insists that this is how great days are made. Using a base of Farmers’ Market peach juice and imbibing it with chamomile, lemon, Lillet, vodka and yogurt whey is Carrier’s way of laying out his expectations for this brunch service. The Peach Lassi is personable, light enough for the summer heat and so rustic that it reminds the drinker that fall is hitting Salt Lake City like a freight train. A double-shot sidecar of espresso ($2.75) isn’t a bad idea, either, in order to cut the effects of vodka.

The most hospitable trait to The Dayroom is that nothing on their rotating menu strays too far away from the $10 range, a number they could easily double. We ignore the affordability of the menu by ordering a healthy selection of everything and soon realize that the portion sizes are such that we won’t be able to finish everything. We start light with a classic Tomato Gazpacho ($8), drizzled with olive oil on top and accompanied by basil, roasted almonds and slightly overripe, white, garden wine grapes. One instantaneously changes their perception of soup not being a breakfast food. It’s so simple that all of the earthy tones are enhanced when the sweetness of grape explodes inside your face. The Gazpacho is complemented, oddly enough, by the Best Granola and Yogurt ($8). As per the laws of food, a parfait isn’t hard to make, but you can tell when someone did it better than the other guy. This is where The Dayroom’s yogurt shines, reveling in unparalleled creaminess. It also maintains a thick body that goes oh so well with honey, dried fruits, granola and fresh blackberries from market.

The Rice Egg ($10) is what takes a sharp turn and tells you that breakfast is over and brunch has begun. Once again, a fried egg over seasoned rice isn’t hard to do, but blanched kale paired with spicy kimchee and an aggressive tomato–red chile coulis will turn heads when laid atop. This is the sort of dish you can tell Carrier is proud of, and it represents his concept well. The Dayroom has no boundaries when dictating their style because they’re in it for the melting pot—amen.

In fair warning, The Dayroom could quite possibly be Salt Lake City’s equivalent to the elusive Great White Buffalo. With their hours, it can be somewhat challenging to choreograph a time that works for everyone’s schedules. This does, however, make it all the more special when the plan works and you’re able to enjoy hours of uninterrupted patio gluttony in a place that is truly one of a kind and ahead of its time in Utah. For a rotating food list, restaurant hours and never-ending pictures of food, dayroomandems.com or @thedayroom on Instagram aren’t a bad place to get your feet wet. Happy eats!

The Dayroom
Purgatory or Bust