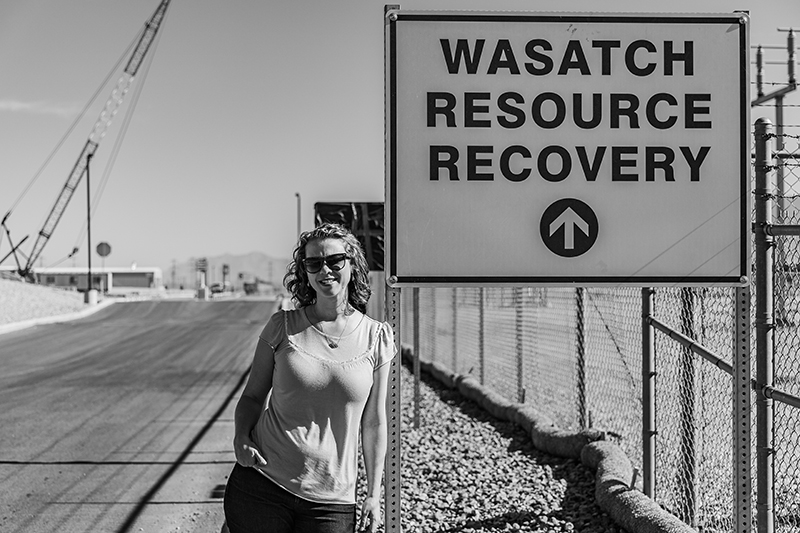 Until this year, most of the organic waste from restaurants, grocery stores and food-manufacturing plants throughout the valley had one ignominious end: the landfill. Our discarded foodstuffs just lie there, gassing off methane into the atmosphere and can take up to 25 years to decompose a mere head of lettuce. But now, there’s a much better option, thanks to Wasatch Resource Recovery’s  brand-spanking-new anaerobic digester facility, which opened its doors this February. Located in the South Davis Sewer District, this enormous facility takes in every variety of organic/food waste and recycles it into useable natural gas and high-quality organic fertilizer.

Morgan Olsen Bowerman, Wasatch Resource’s Recovery and Sustainability Manager, says that the process essentially works like a real, living digestive tract. “This facility is very much a synthetic animal’s body,” she says. “It produces the same two byproducts that happen out of any animal when they eat food,” namely a solid waste and a gas. Hydrolysis tanks, which add water to the waste, are the first stop. “Hydrolysis is sort of like the stomach: It’s where everything gets slurried up and homogenized,” says Bowerman, “and then the digesters themselves are sort of like our intestines, and that’s where we capture the gas.” Finally, the remaining digestate is squeezed dry and becomes a potent fertilizer—you can probably guess what part of the digestive tract that is.

“This is good stuff for the soils.”

When it exits the facility, the big mound of fertilizer looks like dark, slightly damp dirt, and smells surprisingly mild. “This is good stuff for the soils,” says Bowerman. “It’s super nutrient-rich, it’s carbon-based, it’s got ammonia in it … It’s better than a commercial fertilizer, and way better than a synthetic fertilizer.” For now, farmers are just paying transportation costs to spread this raw cake on their fields, but, Bowerman says, “In the end, we’ll make this into a pelletized fertilizer [and] make it into a commercial product.”

The gas-conditioning facility—which was slated to be up and running by September, at the time of this interview—is an equally elegant solution for the byproducts of all this organic waste we make. “We’ve got a contract with Dominion Energy to use their pipeline,” Bowerman says, “so we’ll connect to their pipe, and it will be a renewable, natural gas going in there, just like any other natural gas.” The gas that’s recovered at this facility will simply mix in with the existing natural gas in the pipeline, and every home and business that uses Dominion as their gas utility will begin using it automatically.

Having access to this type of recycling is a big step for our community, but crucially, if we hope to see a tangible difference being made, enough businesses need to put in the effort to participate. Before WRR’s opening in February, composting was a business’s only option for food-waste recycling. But, says Bowerman, compost facilities “can [only] take perfectly clean fruits and veggie scraps, and very few restaurants participate because they have to spend a lot of labor making sure it’s clean enough.”

“My personal hope is absolutely that we will have curbside residential pickup at some point.”

This is where the Solid Food Receiving Building (the “mouth” of  the synthetic digestive tract) plays its vital part. Remarkably, the machinery in this building is able to separate food waste from whatever packaging it’s wrapped in when it arrives—cardboard boxes, plastic tubs, glass bottles, you name it. If there’s food in it, WRR will take it as is and extract it. “We built this whole building essentially because we wanted to have restaurants and grocery stores be able to participate,” says Bowerman, “and if we tell them it has to be perfectly clean, they’ll be less likely to.”

Ease of use means more willing participants work with us, and this automated de-packaging service reduces client-side labor to no more than what’s involved in regular trash collection. “We really have some state-of-the-art stuff in here,” says Bowerman. “This whole building, in fact, makes us very unique in the U.S.” And the investment is starting to pay off. Local food manufacturers are already bringing in huge quantities of waste—up to 75 liquid tons per day from the biggest companies—and businesses have been calling in from Idaho, Montana and Nevada to take advantage.

There’s no real concern that the digesters will reach their capacity, either: This facility was built for the future. “We have room for two more, so in the end, we’ll have four digesters that are each 2.5 million gallons,” says Bowerman, “and that will make us the largest-built digester in the country.”

“We really have some state-of-the-art stuff in here.”

Now, major organic-waste producers in our area finally have the option to recycle. Why stop there? In the future, Bowerman hopes to service the residential sector as well. “It’s not a tomorrow goal, for sure,” she says, “but my personal hope is absolutely that we will have curbside residential pickup at some point.” Until then, WRR hopes to open an onsite residential drop-off in the coming months. “My goal is [that] by Halloween, we have a residential drop-off here for free,” says Bowerman—“so we can capture all the jack-o-lanterns!”

Residents can keep watch for further developments and businesses large and small can learn how to participate at WRR’s website, wasatchresourcerecovery.com.