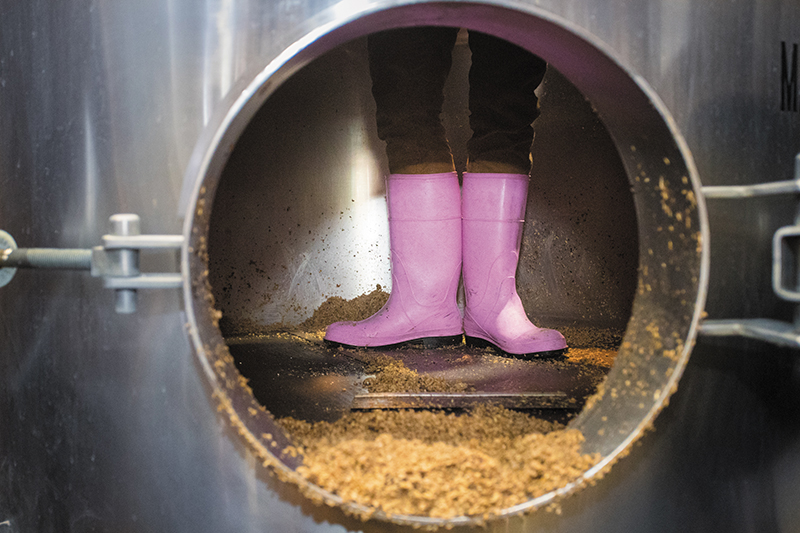 These Boots Were Made For Women: Pink Boots Society Grows its Craft for Utah Women...

Roosters B Street Brewery and Taproom

International Women’s Day in March marked an important moment for the sisterhood of the local craft brewing scene. Having established a Pink Boots chapter two years prior, the Utah membership is growing and gaining energy. Members of the chapter once again joined at Roosters to create a custom beer in celebration of the yearly worldwide day of awareness of surrounding women’s issues. Now an annual event, Pink Boots’ Collaboration Brew Day encourages collegiality to create a beer incorporating Yakima Chief Hops, the sales proceeds of which go to the Pink Boots scholarship fund.

“Historically, brewing was always in women’s wheelhouses,” says Roosters brewmaster Jacquie King Wright. “I imagine that our collab brew days are similar to what ancient Mesopotamian women did as they made beer, just on a much larger, more modern scale. I’ve met a lot of women who have never considered getting into brewing!”

Roosters Co-Owner Kym Buttschardt points out that the stereotypical archetype of the craft brewing industry is typically “‘dudes with beards’–heavy,” she says. “We have several of those guys, too, and we love them! Maybe craft brewing has been perceived as a male-dominated industry like truck driving or construction, but it doesn’t have to be. Women like Jacquie—who bring determination, an education and a passion to perfect their craft—are a boon to the industry.”

“The day itself gives women who are in the industry, but not necessarily on the brewhouse floor, a chance to participate in the brewing process.”

Utah Pink Boots chapter leader Jamie Burnham echoes her colleagues’ notions of the challenges for women in the industry. “I think the biggest issue is not being taken seriously,” she says. “I definitely think that is changing and you are seeing way more women in the Utah Brewing community than before … Women are applying for jobs more. PBS has so many different outlets that provide support across the state and the country—job listings, forums, publications, meetups and conferences. Pink Boots offers scholarships to Siebel, Germany, and brewing classes at U.C. Davis!”

Pink Boots has a wide reach as a global organization, and the local chapter is thriving thus far in its infancy. “I’m currently the Chapter Co-Chair,” says King, a role model in the chapter and local brew culture. “I’ve loved every minute of Pink Boots. The Utah Chapter is amazing!” Roosters, her brewing home, has been a core space for Pink Boots, where the past two brew days have been hosted. “The goal for the brew day has always been for it to move around to Pink Boots Member Breweries,” King says. “I’m happy to say we’ll be down at Strap Tank next year. We’re super excited for this, as Julia Shuler founded Utah’s Pink Boots Chapter. The day itself gives women who are in the industry, but not necessarily on the brewhouse floor, a chance to participate in the brewing process.”

Roosters has grown amid housing the Pink Boots brew days. Roosters B Street Brewery is in West Ogden, approximately a half-mile from downtown Ogden. Buttschardt says, “We partnered with our good friend, Dan McEntee, to build the awesome new brewery and taproom, a 19,000-square-foot building. Our new location is a flip of our current business model, which equates to large brewery and small taproom.” Moreover, Buttschardt echoes her colleague’s sentiments that the PBS brew gatherings have been an important part of Roosters’ mission: “Special events and solid friendships are part of our company core, and we have a lot of both,” she says. “When Jacquie wanted to lead the effort to host the Pink Boots Society and brew a collaborative beer, we were excited to support her.” 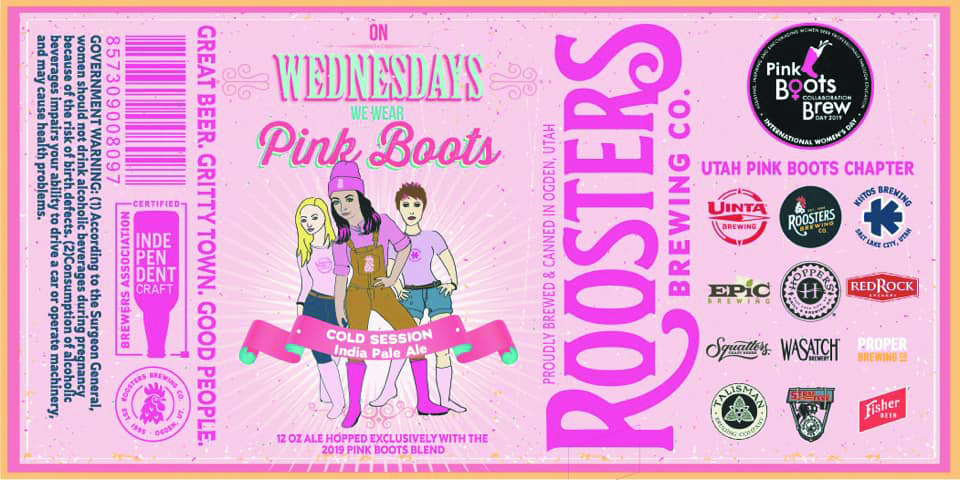 “We brewed a pink session IPA, hopped exclusively with the 2019 Pink Boots Blend.”

Burnham’s near ubiquity in the local brewing scene made her a natural leader for the Utah chapter of Pink Boots. “The beer Industry has been a second family to me since my Beer Nut days,” she says. “I like to stay active and involved in the industry, and the Pink Boots Society aligns with that. I love how the organization is all about lifting each other up. I enjoy the camaraderie and connections with the other ladies. Though I am the Chapter Lead, it really is a group effort to keep it growing … I think we had maybe five members that first year. We now have 25 members with new applications coming in monthly. I’d love to see every woman who works in the Utah beer community join our chapter!”

Reflecting on last year’s brew day, Burnham says, “Last year, we made a Cascadian Dark Ale, and I felt like we knocked it out of the park. This year’s beer is going to be amazing.”

This year’s International Women’s Day beer takes the vision and brilliance of its makers to a new level. “We brewed a pink session IPA, hopped exclusively with the 2019 Pink Boots Blend,” King says. “The hops are citrus, stone fruit and fruit-forward, which should really come through on the nose and finish. We’ll be donating to Pink Boots to help fund future scholarships, as all Pink Boots Brews do!”

PBS brewed the Utah Chapter’s cold session IPA, called “On Wednesdays We Wear Pink Boots.” “We steeped some hibiscus in the whirlpool to make the beer pink!” Burnham says. At the time of this interview, it was scheduled to release on March 27, and cans are “available at Roosters B Street location and on draft at all participating breweries and some beer bars,” Burnham says. “One of our fellow Pink Booters, Julie Kirkland, and her 11-year-old daughter, Lily, designed the label.

Be on the lookout for this year’s Pink Boots beer and the ongoing growth of Utah’s chapter of women crafting magnificent beers collaboratively.