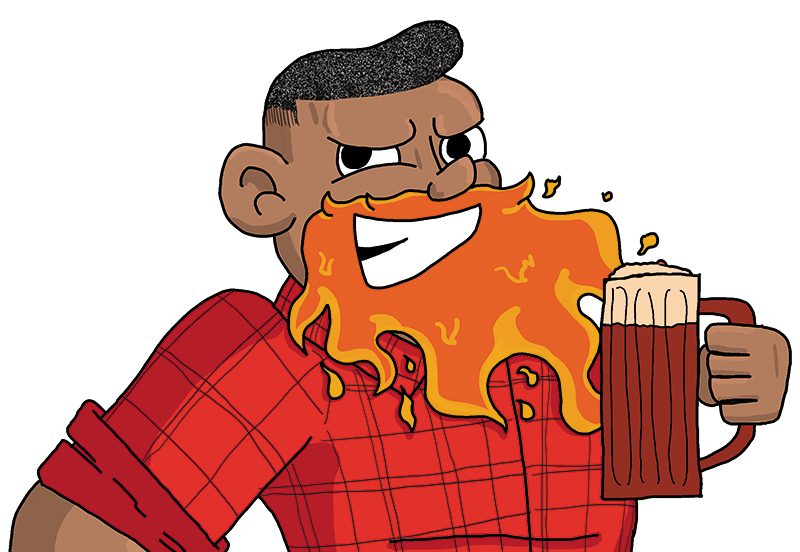 What would you name our made-up mascot for SaltFire Brewing? Comment on this post with your name! Illustration: Ricky Vigil

Utah keeps gaining momentum with our craft beer scene. At press time, by our count, there were five breweries either just beginning to sprout or on the verge of a full bloom for opening. Here you’ll find some updates from Grid City Beer Works. You can also click the links to find more upcoming-brewery information from Grid City Beer Works, Maple Mountain Brewing Co., Toasted Barrel Brewery and a brand new, yet-to-be-named brewery.

SLUG: Last time we spoke, you mentioned that your beers were going to be big ales that you’d get out the gate straightaway, shortly followed by a taproom with Utah beers. Are you still on the same course? If so, how’s it coming along, and if not, what has changed?

Fullmer: That’s still the plan, though the lineup has changed as the seasons have.

SLUG: What product do you intend to have down the line once you establish yourselves?

Miller: Besides a line of great IPAs—including our Singularity Series, which will explore the flavor and aroma profiles of the exciting new hops being developed—we’ll be having some fun with unique flavors in saisons, pilsners, blondes, stouts and porters. We’re also in the early phase of building out our sour beer program, so stay tuned!

SLUG: You’re hoping for an opening in or near April. How do your plans for a taproom align with opening?

Miller: The taproom should follow soon after. Our primary focus has always been to get to producing the best beer possible, and in so doing, we’ve really spared no expense on the brewery to get it dialed in. It’s one of the reasons it’s taken us a bit longer than planned to launch, but the end result will be worth it, we think.

SLUG: Has your bottle-filling system continued to support SaltFire’s opening, and how has that end of your LLC grown over the past year?

Miller: Absolutely. We wouldn’t be where we are without it or we’d be opening with a smaller and sub-par system. Micro Filling Systems has had steady growth, and we continue add new products like a pneumatic bottle capper and a line of bottle labelers.

SLUG: You’ll be neighbors with Shades of Pale, Sugar House Distillery and Beehive Distilling. What hopes do you have for this part of town as far as SaltFire adding to this dynamic?

Miller: We have great hopes for this area, and I think SaltFire Brewing will be a cornerstone to the growth we’ll be seeing in both residential and commercial development. Also, with the changes to the zoning laws in South Salt Lake, hopefully we’ll see an increased interest in other startup breweries looking to locate in the Salt Lake area, looking to South Salt Lake as a great option for them. The more, the better! We’d love to see this area become a destination for both locals and visitors to experience what Utah has to offer for both beer and distilled spirits.