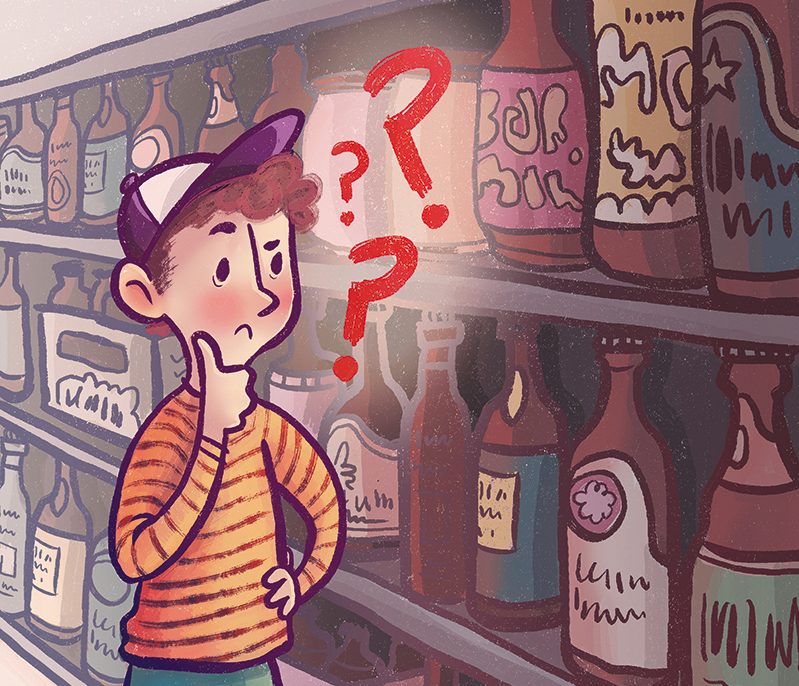 A quick, informal poll from the Utah Craft Beer Community—a Facebook group of 1,500-plus beer-minded people—illustrates local thoughts about Utah’s state-run liquor stores. Comments ranged from concern with inconsistent products, to lack of selection, to some even feeling that it may only matter how close a location is to one’s home. Some feel that none of our liquor stores are good. Others appreciate the importance of being able to
acquire high-point beer without leaving the comfort of Utah.

Surprisingly, having beer stored at proper temperatures didn’t come up. This has been a longstanding issue for us when it comes to our neighborhood stores. We have visited liquor stores across the country, all with countless beverages sitting at room temperature, but each also had cold cases, housing usually fresh, chilled beers. We would all love a world where we are treated as adults, to be able to walk into a bottle shop and buy ready-to-drink beverages to open or refrigerate when we get back home—but that just isn’t the place we live. There is the option of visiting specific breweries with cold cases, but you won’t find an all-in-one beer consignment shop with cold craft brews here.

Regardless of your stance on the DABC stores, here are some basic guidelines for how to shop at these establishments that vary from each other. We want to help you find the good stuff while avoiding the pitfalls.

Give Me IPA or Give Me Death

Let’s get to the elephant in the room. For a long time, the India Pale Ale has been consistently one of the most popular styles of beer. Some of these beers are refreshingly hoppy and widely sought-after. But here’s the concern. IPAs are best enjoyed fresh. Learn to spot the can or bottle date. Most breweries have adopted a “best by” or “enjoy by,” or even a “bottled on” date. The best rule of thumb is to stay within 90 days of the date. Anything outside of this is bound to start losing some of the freshness, causing the beer to sweeten up as the malt comes through. There can be reasonably fresh beer on the shelves despite what may appear otherwise—you just have to look.

Make it a Regular

Find a go-to beer. Shopping the liquor stores for only the newest beer will bring moments of disappointment because there might not be anything. However, there are beers that you will always seem to find. Sierra Nevada’s Pale Ale or Squatters’ Off Duty IPA are standing regulars. There are several solid go-to brews, usually available at a good price point. Just remember to check the dates as you would with IPAs.

Beer-cap art has taken strides in the past few years. We aren’t talking about the crown on top of the bottle, however. Checking the caps means not all stores take great care in beer display. Often, newer arrivals are left lying around at an end cap or near the register. There is nothing more frustrating than loading up with a hundred dollars of beer, then seeing the latest Ommegang Game of Thrones or Robinsons Iron Maiden brew waiting to add to the total. If you don’t want to be caught off guard, learn where your local hot spots are. Take a peek there before the shelves. This may help with a sticker shock.

Because of out-of-state distribution from several important breweries to Utah, we are often lucky enough to find treasures. A mistake in shipping or a never-picked-up split-case leaves some fun beers out there. You will be pleasantly surprised running into a rare version of Deschutes’ The Abyss or Lagunitas’ barrel-aged Coffee Stout. This is where it pays to shop around the different stores like a treasure hunt.

In the beer version of “pay it forward,” we occasionally like to do good deeds for our fellow beer drinkers. This can simply be pointing a fellow shopper to a new arrival or local favorite they may have missed. Or, purchasing the 100-day-old IPA, wagering that it may still probably taste good, but taking the risk to clear the shelf for freshies. One of the most important good deeds is to support local breweries. Basically, grab the Red Rock Elephino or the Shades of Pale Slick City, because you might find your next go-to.

Think Outside the States

There are a lot of different suds at our liquor stores. Want to challenge your beer palate and learn a little more about the geography of where they originated? We suggest digging into that corner of the shelves dedicated to the beers abroad. Many of the beers are ancestors to modern American brewing styles. We admit that it took some time to find styles and flavors we loved, but it happened. Generally, you will not regret this decision.

Another thing to remember is, as neutered as Utah liquor stores may seem, they are not created equal. Many of them have employees who take great care in the display and selection, so venture out. And one last note: If you have a beer you love, you can order it online through the DABC website. You have to buy a lot of it, so make sure it’s one you’ll drink, share or age.