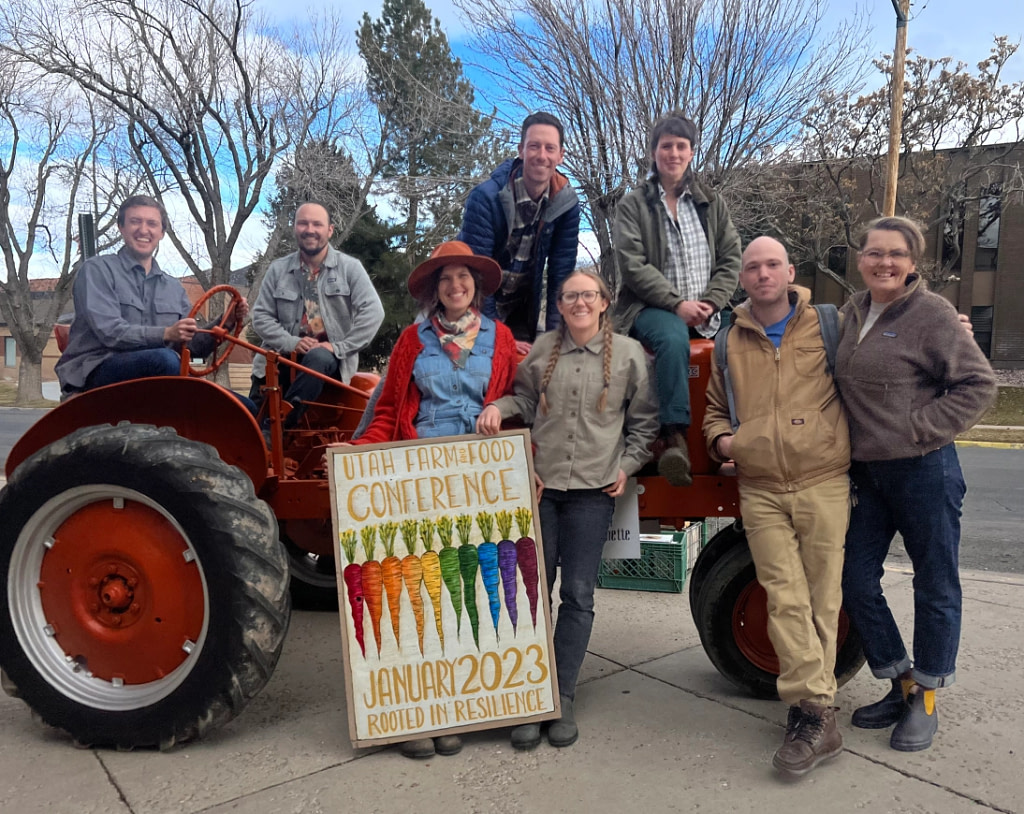 Last weekend, The Red Acre Center hosted their seventh annual Farm and Food Conference. Founded by mother-daughter team Symbria and Sara Patterson, The Red Acre Center for Food and Agriculture is a farm advocacy organization located in Cedar City. In addition to hosting this annual conference, they champion small, local farms through micro-grants, legislation, farmer meet-ups and other means. This year’s conference theme, Rooted in Resilience, honors farmers’ legacy of gathering to share seeds and knowledge in support of each other and the land.

The conference kicked off Thursday evening at The Barn at Cedar Meadows. Guests were treated to a farm-to-table dinner prepared by Chef Shon Foster of Against the Grain Restaurant Group. As we finished dessert, the dining room transitioned into a seed swap. The Seed Exchange, sponsored by KRCL Punk Rock Farmer Al(dine Strychnine), was an opportunity for attendees to share seeds they’ve saved and take home those stewarded by others.

Friday morning we flocked to The Heritage Theater, where we were greeted by Cedar City Mayor Garth Greens. He spoke on Cedar City’s agricultural history and mused as to why settlers chose the frosty month of November to establish the town. Symbria Patterson followed with a talk on decentralizing the food system as a community. “By feeding ourselves and our neighbors first, the world will be fed,” Symbria said. Opening the conference with these words grounded us in the theme of resiliency.

“By feeding ourselves and our neighbors first, the world will be fed.”

We then broke off into different workshops centering topics as varied as soil health, biodynamics, policy, beekeeping and more. In the afternoon, attendees congregated for “Making it Happen,” a session highlighting successful businesses in our state. Kristen Kropp and Zach Hartlyn, the third and current owners of Backyard Urban Garden (BUG) Farms, told us about their community-supported agriculture (CSA) operation, how it has evolved over time and the benefits and drawbacks of growing in borrowed spaces. Flipping through photos of friends helping them build the hoop house and washing/packing station, sharing meals, working in the field and doing yoga together, Kropp teared up as she reflected that “we depend deeply on our community.”

The other speaker was not a farmer because, as Sara Patterson said, we “like cheese and vegetables and bread, and not just vegetables.” Kat Puzey is St. George’s Farmers Market Coordinator as well as founder of Modern Farm and Artisan Coop (MoFACo) . Puzey recounted how devastated she was when the pandemic caused sponsors to drop out of MoFACo. She persevered and secured a building in which to offer workshops, tools, retail space, and other resources to locals. She showed photos of community members building the space into what they needed it to be.

The community had shown up in force again when the city had denied Puzey’s efforts to start an online market during lockdown and bring back the in-person market in summer 2022. Collectively, people made hundreds of calls to the city demanding access to local food until they complied. Puzey encouraged us to share our stories, promoting authenticity as an effective means to garner support. With two separate accounts of people coming together to enact change and buoy each other up, the audience felt empowered. Our voices, actions and dreams do matter, and we can realize them together.

The next day, after browsing the state-wide farmers market and attending another series of workshops, participants gathered for a speech from the keynote speaker. Jean-Martin Fortier, considered a celebrity in the farming world, told us he didn’t come from a farming family. Rather, in the course of studying ecology and climate change, he arrived at farming as his way to be part of the solution. He started learning to grow better, not bigger, and shared his bio-intensive techniques in his widely revered book The Market Gardener. The success of the book led to a television show documenting life on Fortier’s small, organic farm. The show influenced public opinion and ultimately public policy in Quebec; the government now offers $20,000 to people starting a farm. This would do wonders in the United States—farms would be popping up left and right. The benefits would be far-reaching, Fortier argued, saying, “A local food system is vital to a healthy community.” If it can happen in Quebec, it can happen in Utah. We just need to get loud about it.

Leaving the conference, I felt encouraged and inspired by what can be accomplished through the persistence of passionate, committed citizens. Alas, we don’t yet have a TV show about local farming, but we do have this platform! Volunteer on a farm, shop at farmers markets, start a garden, learn to can; join the Red Acre Center at the Capitol for their upcoming Pastry and Politics events to get updated on what bills are affecting small agriculture and get yourself heard (pun intended). To become a member or support their work, visit their website, redacrecenter.org, Facebook at Red Acre Center, or Instagram @redacrecenterut.