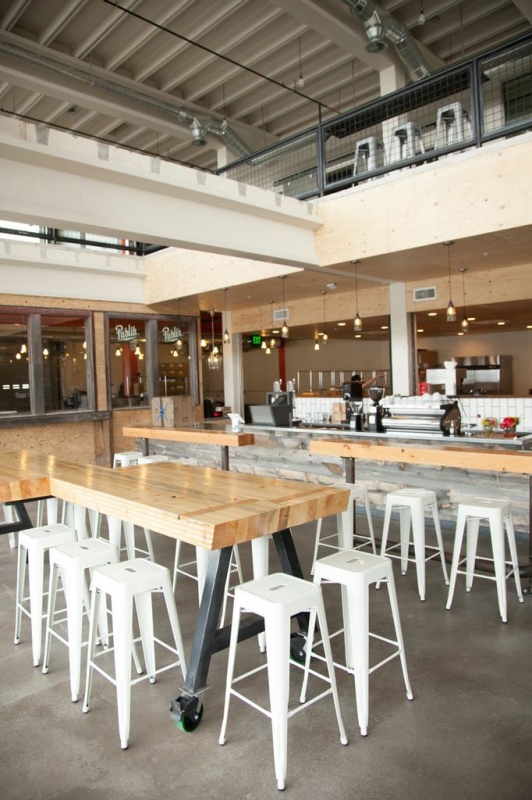 A Toast to Going Publik Coffee

Tuesday morning, the inimitable Alex Ortega and I had the pleasure of touring a new coffee shop and roastery on West Temple between Ninth and Tenth South. It’s called Publik, which according to co-owner Matt Bourgeois means “community” in Dutch. The voluminous building, which also contains a giant event space, replete with dark wood and frosted glass, used to house a printing press owned by a Dutch couple. That day, the FBI was upstairs, making use of the shop’s for-rent meeting facilities, which give local hotels a run for their money on corporate business. As our tour guide Katie Eldridge put it, it’s the kind of space that makes you want to throw a big party (or in my case, curate a dance show).

Alex and I each got one of the two coffees they were featuring that day. We preferred my Sumatra Blue Batak over his Ethiopia, though both were lovely. Alex noted the coffee’s intonation of green peppers. I was thinking about a peaty glass of scotch, even though it was still miles before noon. The Blue Batak’s vegetal qualities were almost sweet against the earthy backdrop common to coffees from Sumatra. Roaster Ryan Gee offered some context. Many, he speculated, would roast this a bit darker, which in a batch of this quality would yield a rich buttery flavor that’s easy to sell—and harder to screw up.

Our coffees were brewed on an Alpha Dominche, a machine you might have seen if you’ve ever visited Nobrow. Like an espresso machine, it has a few distinct “groupheads” or separate brewing chambers. In terms of the flavor, it delivers a range of different consistencies and textures. Some of its products are more like siphon brewed drinks, others more reminiscent of pour-overs or french presses. Publik Coffee also has an espresso program and its own espresso which, like many third-wave blends, consists of a proprietary mixture of African and Latin American beans, with crop that is directly traded with a farm in El Salvador. Accompanying the drinks is a menu of artisan grilled bread plates which feature an impressive variety of local spreads on Red Bicycle Bread. It’s worth mentioning to those who rush to point fingers at pretense, that everyone we met at Publik has a healthy sense of humor about their compendious “toast menu.”

Foodies I’ve talked to are clearly thrilled to have another addition to our city’s growing array of cafes and roasters. Momentum in this scene is clearly building. Two more shops under construction await coffee geeks, critics and, well, the public. On Third South, in the old Slowtrain space, man-about-town Nick James, former owner of the nearby salon Jouissance, is opening a new cafe in the next few months. In a former life, James worked at Coffee Garden. A little further south, at the Holladay Village Square, Derek Belnap, also veteran Coffee Garden barista, is opening his own locally-sourced shop. Onward, ho.