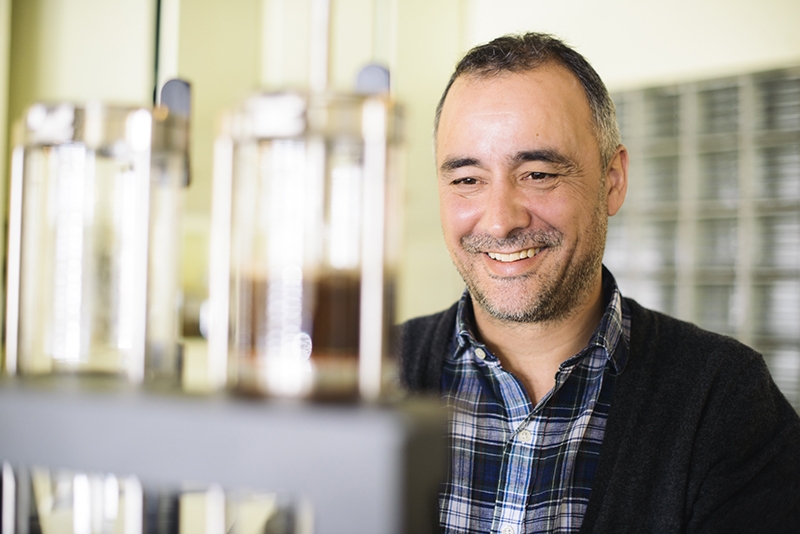 “A very skilled barista can make a very good cup of coffee—and so can we—but we can make that very good cup of coffee every single time,” says Thomas Perez. He’s the new CEO of Salt Lake City’s Alpha Dominche, manufacturer of the Steampunk, a wildly innovative device that can achieve cup quality and consistency never before possible. “The Steampunk is a commercial brewer that will allow you to brew every cup of coffee and tea to perfection,” says Perez. “You can completely control the brewing process, and repeat it again and again and again.” Last October, Perez left his post as CEO of Bodum North/South America, a company that produces one of the simplest coffee-brewing devices—the French press—to head a company that produces one of the most complex coffee-brewing machines. Perez, who was born in Denmark but spent the last 14 years in Sweden, Australia, New Zealand and New York working for Bodum, was drawn to Salt Lake City because of Alpha Dominche’s innovation. It’s a telling move, one that reflects a growing shift in philosophy within the industry and in cafes themselves. When it comes to coffee and tea, artisan isn’t good enough anymore—perfection is the next step.

As for the machine itself, it’s a beautiful achievement of engineering and industrial design. With the size and stature of a modern espresso machine, the flagship Steampunk 4.1 comprises a base enclosing the electronic and hydraulic components, four vertical glass tubes or crucibles in which coffee or tea is brewed, and a touch-screen control interface. Aside from a few small parts and the Google Nexus 7 tablet that runs it, every metal, glass, wood and electronic part in the Steampunk is custom-made here in Salt Lake City and assembled by hand in Alpha Dominche’s headquarters at 726 S. 400 W. To brew with it, a barista puts a precise amount of coffee or tea into a crucible, selects a desired volume and temperature of water, brew time, amount and duration of agitation, and begins the brew. These settings can be saved as recipes for a particular coffee or tea, and a different recipe can be selected for each crucible, allowing four distinct brews to happen simultaneously. These recipes can be published to a cloud-based library and shared from roaster to cafe, or from cafe to cafe, anywhere in the world.

The Steampunk may initially seem like the nail in every barista’s reclaimed-wood coffin—what will we all do, if not stand and pour water into a French press, AeroPress or Chemex? Perez, though, sees the Steampunk as a tool for baristas to achieve brewing excellence. “With this machine, you’re able to manage more complexity with coffee, and to apply all your techniques to each individual coffee. It’s kind of like taking it one step further than French press,” he says. “You can manage many more kinds of methods and recipes. Then you can do anything—that’s what inspired me.” The inspiration Perez speaks of led him to Salt Lake City.

Salt Lake City, a place that was once about five years behind when it comes to coffee, has become a hub of coffee culture and innovation—enough so that The New York Times ran a story about it last November. High-quality, brewed-to-order coffee is becoming the norm here. About half a dozen Downtown shops serve excellent coffees brewed by amazing baristas using a French press, siphon, drip cone, Chemex or AeroPress. That being said, the last time I walked into Nobrow Coffee Werks and ordered a “pour-over,” I practically had to beg barista Zade Womack to brew it with an actual Hario V60. The popular Japanese drip cone, which made its mark on modern coffee culture in 2005, already felt quaint and outdated. Instead of its former place on the front of the bar, the V60 now makes its home on a high shelf behind the counter. Center stage at two Salt Lake shops—Nobrow and Publik Coffee Roasters—and at cafes throughout the world, sits the Steampunk.

It’s been a long time since there has been such innovation on the very basis of how to brew coffee—the advent of the espresso machine in 1884 is the only one that comes to mind. When I ask Perez if the Steampunk is as historically and technologically important as the espresso machine, he answers without pause, saying, “Yes. Absolutely.” He reminds me, though, that coffee isn’t the only application for Alpha Dominche’s invention. “We talk about coffee all the time, but I think teas are just as high on the list as coffee. You have even more complexity in tea than you have in coffee,” says Perez. The tea industry, particularly in Asia, has embraced the Steampunk 2.1 and 4.1 (available with two or four crucibles, respectively) and the Steampunk MOD—a modular setup that hides all but the crucibles under counter, as well as custom MOD setups that can include multiple crucibles spanning an entire cafe bar, such as the one in the San Francisco tea shop Samovar.

As far as future innovations go, Alpha Dominche is focusing on perfecting the machines that they already offer, as well as continuing to build custom versions of the Steampunk for worldwide clients. Ultimately, Alpha Dominche’s goal is, in the words of Perez, “showing people, on a grand scale, what coffee can be.”