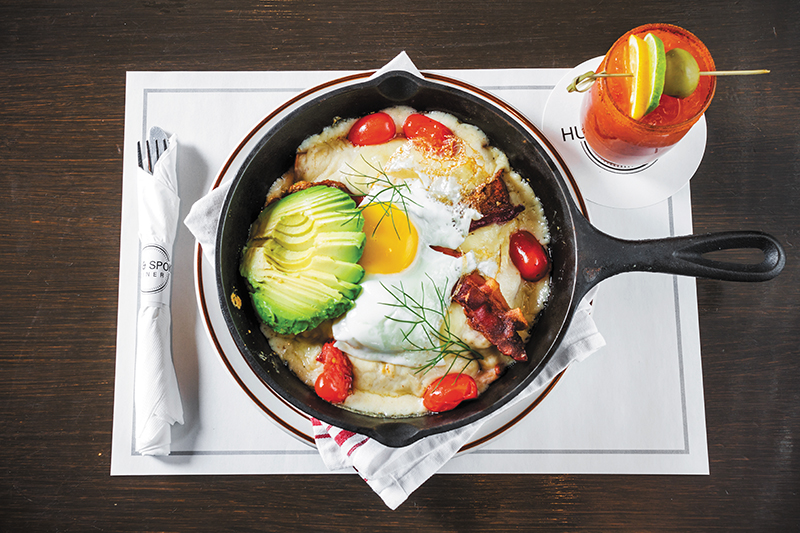 Imagine a modern concrete-and-glass box set down in the middle of a sepia-forest tableau of deer in scrub presiding over some bar seating. The raw elements of nature are here: warm wood, stone and subdued earth tones; floor-to-ceiling windows that look out over neighborhood streets; and an overall whitewash of clean modernity. This is Hub & Spoke Diner, sister to Finca, Pago and East Liberty Tap House, all ambitious but relatable eateries founded and owned by Scott Evans. This one, says the menu, was conceived as an homage to a Minnesota diner that Evans’ family owned, and I’m game—I spent some of the most blissful summers of my childhood in Minnesota. Hub & Spoke is a diner in name and ambition. It opens at 7 a.m. and closes at 9 p.m. It concentrates on breakfast, lunch and shakes. But its space does not say diner: It is cool and hip, and the menu, though it has many of the same old items, has also changed. I need to let my mind catch up. That is easily done, I found, with Hub & Spoke’s great Bloody Mary ($4).

This Bloody Mary lives in a modern Nordic tumbler, rimmed with spicy powder, lemon, lime and olive. Based on a thoughtful house mixture of blended vegetables, tomatoes and who knows what (I taste onions and garlic), it is seductive, spicy and strong—and quickly gone. But at a measly $4, count me in for several with a meal. The first time I came here, the crush of hip kids in line for Sunday brunch was too long for me. Weekdays, the place avails itself more readily to a fogey like myself.

Big words for a big pancake: I think the Sour Cream Flapjacks ($8.99) are the best pancakes ever. They are so delicious that they don’t need much syrup. They’re rich and moist with just a bit of crunch at the edges. Similarly, the Pound Cake French Toast ($6 for half, $9.25 full) sounds rich. It’s just on the edge of too much—a thrilling place to be—moderated by a side of bacon. The Chicken and Waffle Sandwich ($10.50) is awesome, with a fried, juicy, XXL-sized breast of flavorful chicken breaded in a funky flour and spice sheath, inserted between a couple of thin crisp waffles and topped off with jalapeno-infused syrup.

The Kentucky Hot Brown ($11) is the star of the menu. Served in the skillet that cooks it, a drench of creamy bechamel sauce rounds out a sourdough island stacked high with smoked turkey, bacon, avocado and a fried egg. Four cooked cherry tomatoes offer palate-cleansing, acidic pops during this rich meal. The most insightful aspect of this memorable dish is a mysteriously deep, smoky flavor that evokes the summer joy of waking up in the woods to a campfire, dew on leaves and crisp morning air. It is transporting.

The two versions of the eggs benedict, the Classic Benedict ($10.50) and the Crab Salad Eggs Benedict ($10.99), are examples of this diner’s contrasts: classic, and dependable, and new, now and wow. The traditional, with an English muffin, fine poached egg, ham and subtle hollandaise, is a good, old-school benedict. Its fresh, urban, seafood twin, featuring a mountain of lump crab salad and a cornmeal griddle cake base, has my vote for best new thing of the day.

On the lunch side, I can’t resist a Reuben ($10.99). Made with turkey or, as I had it, with pastrami, the sandwich stars fresh—if not salt-sharp or bright—house-made sauerkraut. The mild pastrami is premium, as is the Russian dressing, but being the rebel that I am, I used a stripe of sharp yellow mustard to bring some turmoil to the decidedly peaceful flavors. The Open Faced Roast Beef Sandwich ($11.99) is a fan favorite, mentioned fondly by my foodie friends. I see the homage to that long-ago staple, but it sure has changed.The thinly sliced beef is on a bed of arugula, with hints of celery root and Russian dill. There is no coat of gravy, but with deliciously caramelized onions and the mustard horseradish jus, it all goes together so well that I text my friends to say I’ve seen the light. The Tuna Melt ($9.99) is a generous beast that arrives demanding that you eat every bite. Each mouthful is rewarded with a tuna salad that is crunchy and fresh, and I’m happy to oblige.

If you were me, you would finish up your breakfast or lunch with a boozy shake (if you didn’t already have several Bloody Marys like I did). I liked the Grasshopper ($8.50), which is a crème de menthe and Godiva chocolate liqueur–infused bit of Northern Territory–style misbehavior. The same delicious shakes can also be made without alcohol, but where’s the fun in that?