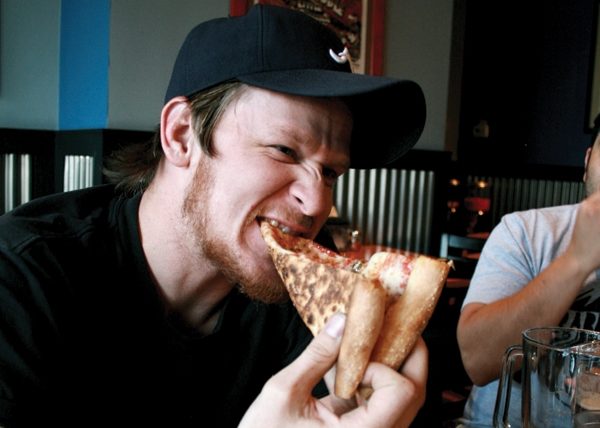 Este: Forks, Ranch, Pineapple and the Red Sox are for Suckers

This is a bittersweet column for me this month, because it will be my last for a while. Life has become a bit crazy for me so I decided to pass the torch to some other SLUG writer who thinks too much about their food, but if you can’t live without me, you can always send me an email for a quick thought on some dining spot you’ve never been to or if you want to pick a fight over a meal you’ve recently had. I’m always down to talk some shit and push my opinions on you.

So, with that out of the way, I decided to write about one of my favorite places for this last article: Este Pizza––the downtown location specifically. It’s not that I like it any better than the Sugarhouse location, it’s just that I live about a block from 200 South and I am too lazy to venture out of my immediate surroundings unless I have to.

Located in the old Guthrie Bicycle Building, this is a much easier location to find than the Windsor Street spot––no driving down back streets and pulling up behind buildings to walk down an alley to find the entrance. Just drive up 200 South and there it is in a beautiful old brownstone next to FICE. It’s been almost a year since the downtown Este opened. The idea came about as a plan that Dave Heiblim (Estes’ founder) had to sell a franchise to his manager Brook Lund to help raise the money needed to keep the original space going after a kitchen fire shut them down and the reopening process took longer and cost more money than expected. The end result: two Este’s, it was a win-win situation. The downtown space is comfortable and simple with plenty of old concert posters to check out while you wait. It’s often the case that it is hard to find a table at lunchtime or on the weekends, which is why I often take my slice to go. They also offer delivery for those too lazy or lacking in the appropriate transportation to find their way over.

I’m not sure how closely Lund and his staff follow the regulations Heiblim put in place at the original location involving no forks, no ranch, no pineapple and no Red Sox attire, but I am often tempted, when I’ve got my pizza at home, to flip on a Red Sox game, throw some pineapple on top of the pie, grab a knife and fork and dip that fuckin’ slice in some ranch dressing. If you are caught doing any of the afore mentioned acts, considered by many fans of New York style pizza to be sins, you might be asked to leave. This is true New York style pizza in a shop with New York attitude, meaning: large slices, generous toppings and a house-made sourdough crust that is firm enough to hold up when folded in half. This is pizza that should be eaten by hand with its grease spilling over your chin.

Aside from the dozen plus specialty pizzas offered, available in three sizes, 14”, 16”, and 18”, like The Clay ($17-$21) a meat lovers heart attack waiting to happen or The Lasagna Pizza ($18-$22) piled with marinara, ricotta cheese, and house-made meatballs, Este also offers an assortment of pasta starting at $11 with one “toss-in” included and $1.50 for each additional “toss-in.” With four pastas to choose from as well as a sauce of your choice before you even get to thinking about your “toss-ins,” it’s easy to get overwhelmed. I’m of the opinion that simple is best, like linguini with marinara and sausage. There are also the Stromboli (three toppings) and Calzone (two toppings) options ($8 for the regular and $14 for the large and $.75 for each additional topping). While there are similarities between the two dishes, they are distinctly different. The Stromboli consists of pizza dough folded over sauce and mozzarella whereas the Calzone is made by wrapping the dough around mozzarella and ricotta. Both are fantastic! One fairly unique thing about Este is all of their vegan options. There are pies with both vegan cheese and assorted vegan toppings like vegan meatballs.

When my wife and I eat at Este, we tend to keep it pretty simple: a cheese pizza (sometimes a pepperoni) a House Salad (regular $5 and large $9) with the house made tomato vinaigrette and plenty of fresh ingredients, a pint of Uinta Brewery’s Cutthroat Pale Ale and a side of Garlic Knots ($4.50) just to make sure that my breath is really bad after dinner. We do this often, and have always had a good experience, but I hear from friends regularly that they are unhappy with the service, often complaining about the staff being rude and abrupt. I think that the New York thing might go to a few of the employees heads, but the food is still good enough to make it worth the abuse.