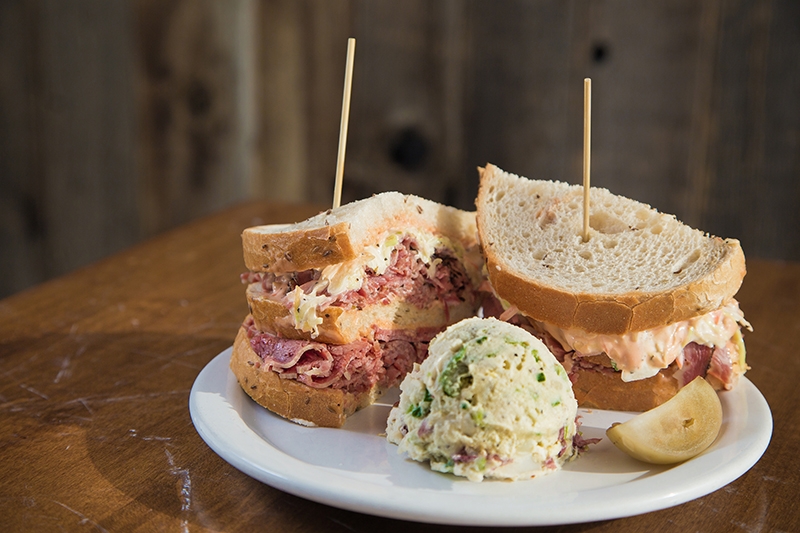 Feldman’s Corned Beef Reuben is one of Salt Lake’s most authentic.
Photo: LmSorenson.net

Feldman’s Deli: A Chagigah to the Big Beehive

Eating for the public eye comes with an alert subjectivity, which demands accuracy pinpointed precisely to the better-or-worse longitudes of a Richter scale. The restaurant proprietor, unexpectedly awaiting such a guest, can only hope their ship is tight enough before the Devil throws a curveball. This particular morning, I surprisingly found myself not alone, nor the first, but the second person in line at Feldman’s New York Jewish Deli, 10 minutes before the doors were set to open that business day.

A welcoming invitation came from an employee within, and we made our way to the waiting area inside Feldman’s spacious, white-walled dining room, partially paneled in reclaimed barn wood accenting the vaulted ceilings, which expose 1920s supports and façade lighting to bring out busts of porcelain Elk. The regular who entered with me sat casually close, skipped the small talk and dove straight into a rave about the house-boiled bagels complementing the best Lox Platter ($8.00) in Salt Lake.

I acknowledged his suggestion for a later date and instead delved into Janet Feldman’s famed Onion Bagel with Schmear ($3.00), which had been boiled then baked that morning. This sliced-in-half morsel, steaming from unmatched freshness, held just enough surface tension, without sacrificing tenderness, to spread cream cheese. A few hand-sliced onions, which naturally fell off the equally golden outer bagel, garnished my palate with a rich, toasty finish.

If you can only sample a single item on the entire menu, though, take the Knish ($4.00). Served in a trio, these fist-formed fried-potato dumplings would hold their own as drunken European pub fare, though I regard them a Utah delicacy. Biting into the feathery, butter-crisp, pastry-wrapped skin reveals the depth of the mashed potato. Sweetened, caramelized onions meet the garlic upfront, melting into the creamy spuds, interrupted by thoughtfully placed potato skins—a nice touch to bring in some more texture.

The Corned Beef Reuben ($12.50) features the lighter side of Feldman’s red meat imports from the Big Apple, slapped between two medium-sized, buttered and grilled slabs of Jewish light rye, a helpful layer of sauerkraut and Thousand Island dressing to match. Feldman’s sauerkraut is three-dimensional. The salty-sour expected of good sauerkraut is present here, along with bold spice from seasonings, easy hints of natural sugars and a forgiving crunch in the cabbage when bitten. The corned beef was slightly lighter than I’d prefer it to be. However, when all of these bases come together to make the whole Reuben, that earthy collection of cured and toasted hard work still pays off as one of this city’s best. I’ve since learned of the substitution, or secret menu, which features the Rachel, a pastrami on coleslaw Reuben; and the Trish, a turkey Reuben.

The Hot Pastrami ($11.50) starts with the same light rye as the Reuben, only without butter and untoasted. The spread on each bread slice is a sharp, fine-grain, white wine mustard for a kick, and the pastrami is a deeply peppered burgundy with smoky undertones that complete the piled slices as they evaporate in your mouth. This sandwich would have been perfect with more of the mustard. The bread not being toasted added an undesired dryness that could have been counterbalanced by the mustard, which, in turn, would have spiced and complemented the pastrami. Regardless, it was damn good. Of course, no Jewish-style sandwich is ever complete without the lone pickle to the side. This kosher pickle, hailing from Brooklyn, is quite the treat, as it starts off with the clean, crisp crunch that can only come from an unpreserved brine barrel, which carries into a subtle pepper kick that finishes neutral to the flavors previously exposed.

With all of this seamless-sounding maintenance of tradition, it’d piqued my interest that Feldman’s wasn’t boasting the kosher designation. “Utah just doesn’t have the demand,” says Mike Feldman. A fair amount of Feldman’s inventory comes from the best Jewish delis in the United States, so reliable standards can be met, yet this Utah kitchen pushes those boundaries, like with the spare use of mayo in their Potato Salad ($2.50). This stuff comes as a side option and holds the neutral side of a sandwich plate together. Parsley, green onion, red potatoes and celery uphold the expected salad base, but the light addition of mayo and the implementation of sour cream spin it in a new direction. It could have been doused in a hefty dose of white pepper, some of that sandwich mustard and a few drops of vinegar to make the sparks really fly, though.

Feldman’s Deli is quickly growing on the hearts of food-appreciating Utahns searching for a casual place to sit down and enjoy themselves. The Old Jews Who Joke reserved dinner night is scheduled to return in February, and Feldman’s assures that seats won’t last once the announcement gets posted to Facebook. With a clean-cut beer menu, new food additions from the homeland almost monthly and talks of a returning blues night, it looks like Utah is schticking with these guys.