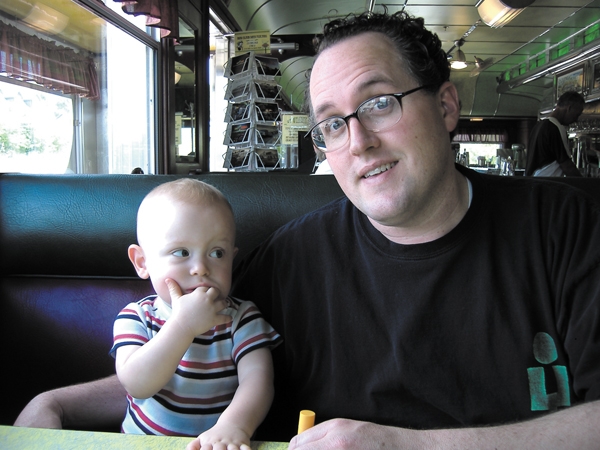 Diners have always held a special place in my heart. Greasy food, handmade desserts and dim lighting—the trifecta of honest road-side eating—have long made me a fan of this style of restaurant.  As essential as the food is though, the setting can be even more important.  A great burger or a fantastic breakfast special can easily be overshadowed by chintzy décor or a poorly trained wait staff.  The opposite can also be true.  The right surroundings can make even average food seem immortal—look to SLC’s own Lamb’s Grill to illustrate that point.  That being said, it is in the combination of great food and an incredible atmosphere that the Road Island Diner really shines.  Not only is the menu reasonably priced and appetizing, the location and background of the building is enough on its own to merit repeat visits.  It really is unbelievable.  Who would have thought that a vintage, pre-WWII dining car eating experience could be had by anyone willing to drive a mere 45 miles from downtown Salt Lake?

The building itself is a marvel of early twentieth century Art-Deco design.  Manufactured in 1939 by the Jerry O’Mahony Co. of Elizabeth, New Jersey, this deluxe model diner came complete with chrome trim, glass showcases, green Italian marble countertops and Tiffany glass ceiling windows.  It was so innovative in its design that it was included in an exhibit at the 1939 New York World’s Fair.  When the exhibit closed, the diner was purchased and moved to Fall River, Massachusetts, where it operated until its owners outgrew it 14 years later.  It was then purchased and moved to Middletown, Rhode Island, where four generations of the same family operated the restaurant until it closed in 2006 to make room for a Tim Horton doughnut location.  The diner was moved to Oakley, Utah in May of 2007—10 miles off of I-80 on the road to Kamas.  The new owners embarked on a year-long restoration project.  Rechristened the Road Island Diner, it opened for business in its current location just last summer. From the current look and feel of the restaurant, one could say that no expense was spared.  The manufactured dining car was brought back to its original splendor—chrome, glass, marble and all.  The kitchen looks to have been updated and expanded, and an outdoor patio and new banquet room have also been added.  Other than these reasonable modern embellishments, the diner looks exactly as it would have when it rolled off the assembly line in 1939.

Enough about the building, let’s talk food.  My first taste of the diner was late on a Thursday afternoon, as my wife and I were delivering bread to an LDS girls’ camp.  The restaurant had come highly recommended.  For starters we ordered the Bleu Cheese Chips ($6.39), a plate of house cut potato chips topped with crumbled bleu cheese.  It took a little while for the plate to come out, but when you consider that the chips are cut and fried to order, a small wait is understandable.  It was a simple starter, but it somehow seemed better than the sum of its parts.  The chips were hot and crisp, and flavorful enough to hold their own against the tanginess of the melted bleu cheese.  We also ordered a pair of burgers—the Boulderville Bleu Burger ($7.89), a standard burger topped with grilled onions and bleu cheese crumbles, and The Diversion Burger ($7.89), the diner’s version of the Big Mac.  The ground beef for the burgers is locally cut and hand pattied daily, and they come with either a side of fries or the house cut potato chips and standard burger toppings.  The meat was cooked to order and remained both juicy and flavorful, unlike the frozen Costco-style burgers featured at many local restaurants.  We washed our meals down with offerings from the soda fountain—a syrup-heavy Dr. Pepper with tiny ice cubes, and a custom mixed peach lemonade. We were intrigued enough to return later and try the breakfast menu.

We returned a week later and ordered the Southern Style Biscuits and Gravy ($7.29), two homemade buttermilk biscuits with sausage gravy, two eggs and hashbrowns and the Diner Breakfast ($7.59), two eggs and toast served with hashbrowns that were topped with green chilies, shaved ham, tomatoes, and Swiss cheese.  The gravy from the first dish was light on sausage pieces but loaded with sage flavor.  I could have used more sausage chunks or even a bit more gravy, but the biscuits were moist and tender and matched up well with the otherwise average hashbrowns.  I know next time to order a side of breakfast meat.  The smothered hashbrowns on the other plate were the perfect foil to the lackluster potatoes.  Fresh roasted chilies and quality ham pieces gave the omelet-style potato dish a savory, smoky flavor that paired well with the richness of the cheese.  We finished our meal with a slice of fresh Banana Cream Pie ($3.59) that was perfect.  It was light and airy, yet still really rich, and topped with both banana slices and whipped cream.  They offer several kinds of fresh pie and soda fountain-style desserts (banana splits, floats and shakes).  In addition to soda and juice there is a modest beer and wine menu that includes several local beer selections and locally blended red and white wines.  There is also an extensive kid’s menu, and several traditional diner offerings like chicken fried steak and meatloaf.  The only downside to the quaint diner location is its proximity to nothing.  You have to plan to eat there­­––you will never end up in Oakley, UT accidentally, but 45 miles is not really very far.  If you’re in Park City, you are already halfway there, and if you’re heading to Evanston to buy a keg, you only need to take a ten mile detour off of the highway.  My advice: block out a two-and-a-half hour chunk of time sometime during your week and take the scenic drive up to the Road Island Diner.  And order a plateful of house made potato chips for the drive home.  You’ll need both hands to drive once you get back to the highway, but don’t let this dissuade you from ordering the chips. They will be gone long before you make it back to the highway.