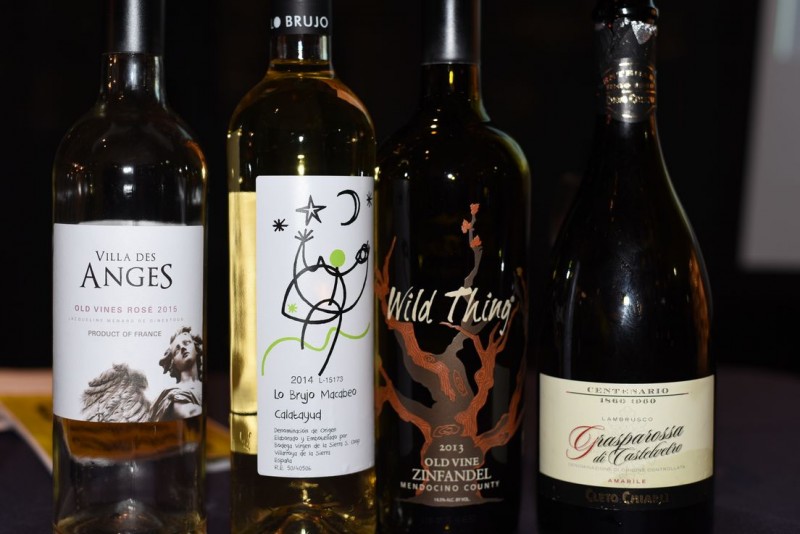 Fooling Around With Food @ The Leonardo

April Fools’ Day has never been a holiday that I’ve enjoyed. As a kid, I was more often the pranked than I was the prankster. As an adult, I am filled with boiling rage every time I fall for the clickbait that all of my beloved news outlets see fit to unleash upon my Twitter feed. Luckily, this year I got to spend my April Fools’ Day far from the Internet and with a four-course meal of creatively conceived dishes at The Leonardo’s Fooling Around With Food event. The goal of the evening was to explore the different ways that our senses can be manipulated. Chef Karli Orton and Pastry Chef Greg Hernandez prepared some inventive meals that were designed to deceive the eye with their appearance; magician Eric Wanner [https://www.facebook.com/MagicManEnterprises/] entertained the guests with some mind-boggling illusions; and Dr. Silvana Martini from Utah State University was on hand to manipulate our taste buds with the West African miracle berry and the Sri Lankan gymnema sylvestre plant. 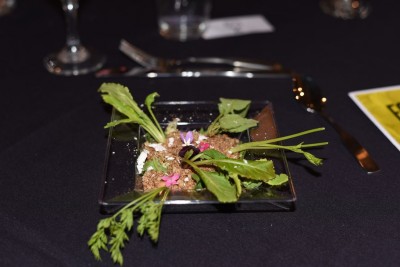 Looking over the menu gave me a little bit of an idea of what to expect. I’d seen similar menus that present savory foods as if they’re sweet and vice versa, and it’s fun to see how chefs apply this extra flair to their dishes. The first course was a faux ice cream cone made with roasted beet mashed potatoes and parmesan cheese. The cheese was melted to create a tuile, which was wrapped in a cone shape around the potatoes. It came plated with a dollop of sour cream to evoke the appearance of whipped cream. While the flavors of parmesan, roasted beets and potatoes all worked well together, I wanted the tuile cone to be more cracker-like in texture—I wanted to pick that thing up and eat it like an ice cream cone. The cheese was a bit on the rubbery side, however, making this more of a fork and knife endeavor.

The salad of course No. 2 was the most visually beautiful dish of the evening. Arranged to look like carrots that are ready to be plucked out of a micro-garden—grass, soil and all—this second course looked like it was taken from Alice in Wonderland. The grass was made from arugula leaves and tiny root veggies that peeked out of a soil mixture of rye bread crumbs and spinach dip. The root veggies and arugula were crisp, fresh and slightly peppery. The spinach dip had a nice, rich flavor, but there was a bit too much—the natural flavor of the greens and veggies got overpowered at the end.

Course No. 3 was chicken and waffles, which I was glad to see because it’s one of my favorites, but I had a tough time seeing how it fit in with the rest of the menu. The chicken had been brined before meeting the deep fryer, so it was tender and perfectly juicy. The honey BBQ maple syrup was tasty with a hint of smoke, but a little kick of spice would have really made the sweet and salty flavors wake up a bit.

The dessert course by Chef Hernandez may have been the star of the evening. It was a take on lasagna, made with cheesecake-layered puff pastry (subbed in for phyllo dough), crumbs of chocolate cake and dark cherry jam. While the lasagna shape could have given Chef Hernandez an excuse to play it safe and make a Napoleon, his use of dark chocolate and tart cherry jam actually made it taste more like that of a stellar German black forest cake. 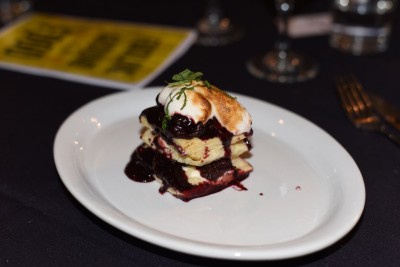 After dinner, it was time to subject our mouths to some serious flavor tripping. This is done by letting a pill made out of the West African miracle berry dissolve on your tongue, gathering up all the sour food that you can and putting it in your mouth. According to Dr. Martini, the miracle berry tricks your taste buds into thinking that sour is sweet. A lemon doesn’t cause uncomfortable puckering—instead, it’s like sucking on overpoweringly sweet lemonade. Salt and vinegar potato chips become thin cookies. On the flip side of that equation, attendees did a shot of liquid gymnema sylvestre, which is a plant that masks the taste buds’ ability to detect sweetness. After swishing this around in my mouth, I dumped some sugary contents onto my tongue, and was wildly unprepared for the sensation. Instead of the burst of sweet, I got nothing. It was like putting sand in my mouth and feeling it dissolve. An interesting side effect of this herb is that it amplifies sour flavors. Our flavor tripping kit included some sour candy, and it was almost too much sour to handle.

While the gourmet four-course meal might be a little trickier to come by, it’s possible to have these flavor-tripping parties on your own or with a group of friends. Both the miracle berry and gymnema sylvestre are available online, so it’s just a matter of organizing a get-together with some particularly sweet and/or sour foods.

The Leonardo has already begun scheduling several new food events for this year—keep checking out their website [www.theleonardo.org] to learn more.