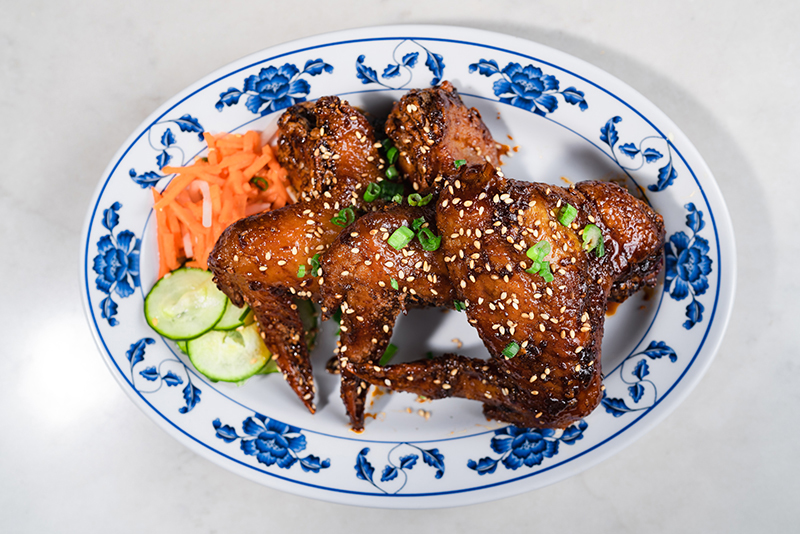 At Ginger Street in Downtown Salt Lake City, a casual and trendy atmosphere is almost as interesting as the food being served. Diners are greeted by servers sporting identical Cotopaxi fanny packs. A DJ in the corner plays what can only be described as lo-fi, trip-hop elevator music. A large, bright-pink neon sign on a central wall inside reads, “Real Food for the People.” Serving what the restaurant refers to as “Southeast Asian hawker style street food,” Ginger Street’s food is hyper-accessible both in concept and in price.

Created by restaurateur Michael McHenry and notable local chef Tyler Stokes, Ginger Street is scaffolded by the use of fresh, high-quality ingredients. Most notably, these kinds of ingredients appear in the Crispy Duck Fresh Rolls, undoubtedly the best thing I tried from their menu. Wrapped in rice paper in the style of a spring roll, the duck rolls are filled to the brim with fresh lettuce, loads of basil and—of course—little nuggets of duck meat. Combined with the sesame-hoisin dipping sauce, these rolls are visually dazzling and texturally interesting—pairing refreshing, crunchy herbs with unctuous, crispy portions of the duck.

“Without any concern for melting, it seems that winter might actually be the ideal season for consumption of Ginger Street’s ice cream.”

Many of the Ginger Street menu items, like pad thai or orange chicken, are familiar for those who have ventured into Asian-style cuisine. The finger-licking Sweet and Spicy Chicken Wings are sticky, salty and immediately recognizable as a more flavorful spin on household takeout chicken wings. It is this westernized version of Asian takeout on which many Euro-Americans have constructed our first experiences and points of comparison. Another example of this effect is Ginger Street’s Drunken Noodles (Pad Kee Mao), consisting of charred, wide rice noodles laden with bell peppers, Thai basil and pastrami. This pastrami in particular is deeply evocative of the kind of bright-red spare ribs my family used to order with their Chinese food takeout when I was a child.

2019 was undeniably the year of the chicken sandwich, so I was desperate to try Ginger Street’s version. The Spicy Chicken Sandwich—layered with green papaya slaw, tomato, jalapeño and Kewpie mayo—was just spicy enough without being burn-your-lips-and-ruin-your-dinner spicy. While the sandwich delivered on flavor, the chicken was only lightly fried, resulting in a squishier, smoother sandwich than expected. Combined with the too-soft bun, the sandwich began to fall apart in my hands after just one bite.

Finally, and not to outdo the brilliance of the Crispy Duck Fresh Rolls, Ginger Street offers a rotating menu of soft-serve flavors. Even among the other choice dessert selections, such as fried bananas and G-bars, the blood orange soft-serve is an immediate winner. Velvety licks are tangy-cool in the chill of winter. The flavor is full-bodied and bright, and the texture is smooth and creamy. Without any concern for melting, it seems that winter might actually be the ideal season for consumption of Ginger Street’s ice cream.

“What will be critical now, for Ginger Street, is to maintain the legitimacy and necessary cultural experience to sustain a restaurant based on the most essential and honest part of a place’s cuisine.”

While the blood orange originates from the southern Mediterranean, this kind of cross-pollination of flavors and ingredients is indicative of the way hawker street food has become a globalized business. What once began as mobile food carts on the streets of Southeast Asia has, like many styles of street food, spread beyond its region of origin.

Hawker Centers initially become popular in places like Hong Kong, Singapore and Indonesia, and this style of street food has now become a contemporary sensation in the United States. Restaurants like Hawker Fare in San Francisco, multiple locations of Hawkers Asian Street Fare across Florida, and of course, Ginger Street, which opened in May of 2019, are just some of the stateside locations offering this kind of cuisine.

Hawker food is real food for the people who inhabit that place of origin, but when brought to the United States, who is it for? What will be critical now, for Ginger Street, is to maintain the legitimacy and necessary cultural experience to sustain a restaurant based on the most essential and honest part of a place’s cuisine. Diners should be excited about Ginger Street’s fresh and intricate flavors, as well as the way the chefs and owners will keep an eye to authenticity.

Twist It, Pull It, Cupbop It: Ramen 930 partners with Cupbop to bring together Korean BBQ and Japanese Ramen
Holy Thai Basil! Bangkok Terrace