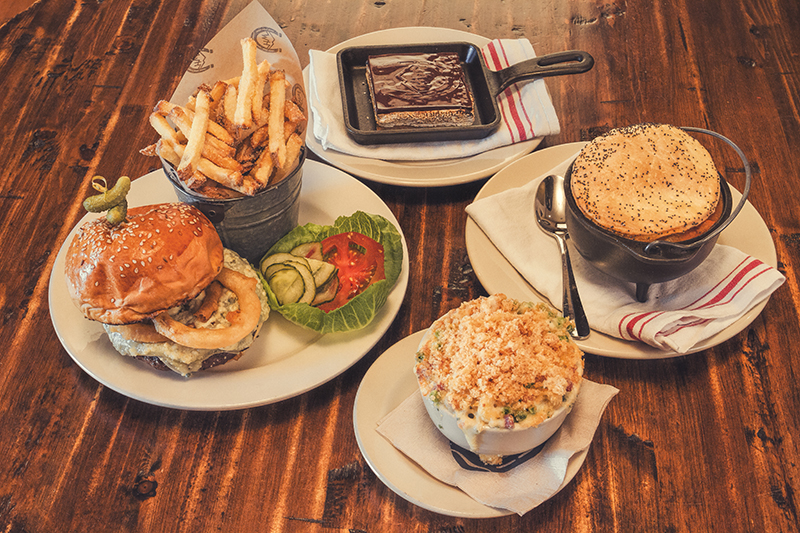 There are few Park City locales that manage to marry the city’s frontier roots as a silver-mining town with its current role as one of Utah’s most cosmopolitan landscapes as effectively as High West Distillery and Saloon. At its core, High West lovingly clings to the romanticized saloons of frontier towns across the American West—places where tired cowpokes, miners and outlaws could rest from their labors and throw back a few stiff drinks. The sepia-toned nostalgia for these fragments of Utah’s foundation have been carefully integrated with a contemporary atmosphere that presents a comfortable yet tasteful dining environment. It’s also one of the only places in Utah that distills and ages its own special blends of whiskey onsite—it’s a moral imperative to sample at least one of their nationally renowned spirits. Or, if you’re a Mormon like me, take a drinking buddy with you and enjoy the experience vicariously through them.

Indeed, discussing the High West 101 ($13) with my dining companion filled me with equal parts fascination and envy. The 101 consists of four whiskeys that offer a solid representation of what High West can do with their mash and still. Designed to be tasted in order, it begins with a shot of Western Oat Silver Whiskey. Our waiter explained that the first interaction with a high-quality whiskey should come from our sense of smell. The Western Oat Silver had a sharp but not unpleasant, fermented tang to its aroma, which was followed by subtle notes of vanilla. Up next was the Double Rye!, a blend of two ryes, one aged at two years and the other at 16 years. This one hit me with some of my favorite autumn aromas—cider, raisins and smoke on a November breeze. The American Prairie Bourbon and Campfire Whiskey represent some of High West’s more experimental concoctions. American Prairie is a top-secret blend of straight bourbons that offers up the fragrant aromas of apple pie and fresh cut oak. Campfire lives up to its name with a sharper flavor of smoke and cinnamon bark.

A trip to High West should most definitely include sampling their High Country Cuisine, an approachable menu that is designed to pair well with the house spirits. American comfort foods like pot pies, burgers and deviled eggs all make an appearance, but they’re prepared with High West’s keen attention to detail. The High West Burger ($18) is the finest example of their culinary perspective. It’s a generously portioned patty made from a bison and beef blend, topped with barbecue-glazed onions and a rich mixture of melty gruyère and bleu cheeses. All of this savory, juicy goodness comes nestled within a house caraway bun, and the whole beast is served with a small bucket of fries. It’s definitely the type of burger that one wants to tackle by slicing it in half to expose all of its greasy little secrets. The patty was tender, and the bison/beef blend was a perfect centerpiece. The meat had an excellent flavor, but it could have used a bit more seasoning to help it come to life on the taste buds. The bites that were heavier on that luscious mixture of cheeses helped develop that hearty burger flavor, and the barbecue-glazed onions brought a smoky-sweet contrast to the party. The fries were on the crunchier edge of the spectrum—I tend to prefer mine somewhere right in the middle—but they complemented the burger well, and I wasn’t kidding when I said that they came served in a bucket.

For a more spoon-and-fork type of meal, the Pot Pie ($16) is a soul-comforting option. Served in a cast iron ramekin and topped with a cracker crisp pastry crust, it’s a hot-tub party filled with all kinds of tasty ingredients. The standout here was the chicken. For someone whose pot pie experience typically involves those uniform chunks of freeze-dried fowl, I loved that this perfectly cooked chicken appeared to have been pulled straight off the bone and thrown into the savory mix. The wild mushrooms and root vegetables were both hearty and tender, and their flavors worked very well with that delicious chicken. As I devoured the last bits of my crust, however, I found myself wishing for more of the salty bread to help bring out the pie’s inner flavors.

Side dishes like the Mac & Cheese ($10) and Hominy Chili ($12) are also worth exploring. The Mac & Cheese is packed with golden layers of silky cheese and noodles, and the chili’s tomatillo and lime notes offer a distinct, Tex-Mex flavor. For dessert, The S’more ($7) is a nice way to round off the campfire feel of High West’s cuisine. The local Millcreek Cacao is a testament to the nuances of chocolate, but it doesn’t leave much room for the house-made marshmallow and graham cracker.

Perhaps the most endearing aspect of a meal at High West is its accessibility. Whiskey, burgers, pot pies and chili are staples of American cuisine, and they’re satisfying in (almost) all of their incarnations. High West has lovingly shepherded these cultural dishes into the confines of its saloon and distillery and elevated them to new heights.