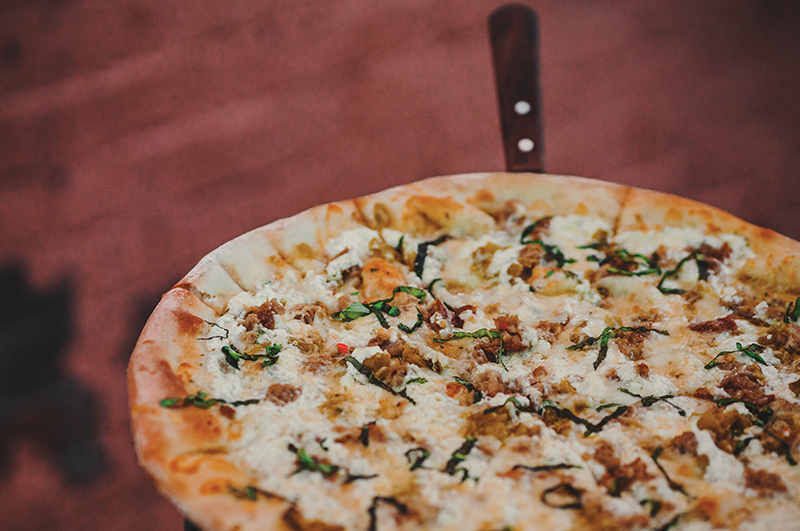 Lucky Slice: The Cowabunga Up North

Utah Film Center is Utah’s preeminent, year-round source for high-quality and curated film programming that features engaging and thought-provoking stories from around the world.

It’s been a long time coming for this Salt Lake based food writer who has been waiting to extol what  he considers to be, by far, the best pizza store in Utah—today is the day. Lucky Slice’s is the story of how three snow bums with culinary backgrounds encapsulated their finer-dining experiences into the kind of stuff The Teenage Ninja Turtles dream about. Let’s go, Lucky Slice Pizza!

It was back in 2011 when Mike McDonald, Will Shafer and Nick VanArsdell took over the historic building on the corner of Lincoln and 25th Street in Ogden. Seven years after completely gutting the structure and reshaping it into the foundation of their pizza empire, they haven’t looked back. We’re walking into an extremely open-faced kitchen where guests can stare vividly at a pie-adorned window, preparing to order craft-soda pops or from a seasonal beer-and-wine list at the counter. Continuing down the narrow corridor of barstool and booth seating, Lucky Slice wall memorabilia takes on pizza-themed renditions of classic movies like Attack of the Killer Tomatoes (Attack of the 20” Pizza), The Iron Giant (The Giant Slice) and—you guessed it—they threw in a Ninja Turtles Arcade game for safe measure. Also, smoking may be bad, but the Lucky Slice logo (neatly repurposed from the Lucky Strike brand) will never be going out of style.

Pizza and Beer: A Winning Combo

While this is the exact sort of nostalgia that anyone growing up in the ‘80s or ‘90s wants to eat food around, that same intricate detail is celebrated in their food card. We’re talking about fresh, consciously sourced ingredients, house-made dough mixed daily, all of the vegan options in the world, at least five by-the-slice specials a day, a pizza of the month and full-pie recipes to boot. There’s something in it for everybody, and as their number of locations is ever growing, there’s absolutely no reason that this phenomenon shouldn’t be completely devoured upon encountering it.

One could arguably ask any Ogdenite working through lunch what their top spot is for lunch, and the answer, more times than not, will be Lucky’s two-slices-and-a-drink combo ($7) or $3.49 a slice. It’s really hard to turn down the chalk replica of robot Pickle Rick (Rick and Morty) Slice of the Month, dubbed The Real Dill, so we jump straight into that one. Think thick garlic-cream sauce, mozzarella, huge dill pickle chips, finished with fresh dill and cracked peppercorn. However the hell this slice works, it works well. Crust being the key decider in a solid slice, Lucky Slice delivers this thin crust crispy enough on the bottom to hold it all together with just enough chew above ground to complement the toppings. The garlic sauce does the same thing, adding a savory garlic sweetness to the crunchy, baked pickles and cheese, making it a no-brainer.

Keeping it weird, the Twilight slice is next and what you’d imagine a werewolf throws back when they’re tired of eating people. It obviously has red sauce, so a garlic-and-herb olive oil makes the base of this slice (insert vampire joke here). Freshly chopped sausage keeps the carnivore-at-heart alive, while finishing with ricotta, fresh basil and smoky, roasted green chile. The combinations are so supernatural that they will redefine even a pickiest palate.

The Fire Island is another one of those controversial slices in popculture that lays its crust down and says that, YES, you can in fact put pineapple on pizza, as long you do it right. Again, they’re smothering this thing in garlic-cream sauce, which is totally fine. Lucky Slice keeps going on the mozzarella train, adding fresh, sliced jalapeños, capicola ham, caramelized onion and … PINEAPPLE! It’s another combination that plays off of the sweet, savory, crispy and spicy profiles of life. The thing about the world is that if it’s too good to stop eating, you’re not doing the rest of us any flavors by talking smack, broseph.

Aside from being all-around good humans, participating in community events throughout the valley, making charitable donations throughout the state and leaving their environment in a better place than the state they found it in, Lucky Slice Pizza is continuing to grow. They now have locations in Ogden, Clearfield (1246 S. Legend Hills Dr.), Logan (64 Federal Ave.), Powder Mountain (winter season only, 6965 E. Powder Mountain Rd.) and two food trucks that travel/cater to pretty much anywhere you ask them to go. For good measure, be sure to track them down at theluckyslice.com or Facebook. Also, if you’re one of those freaks whose into looking at beautiful spreads of delicious food on Instagram, the @luckyslicepizza feed is enough to keep a person entertained for years to come. You’re welcome.