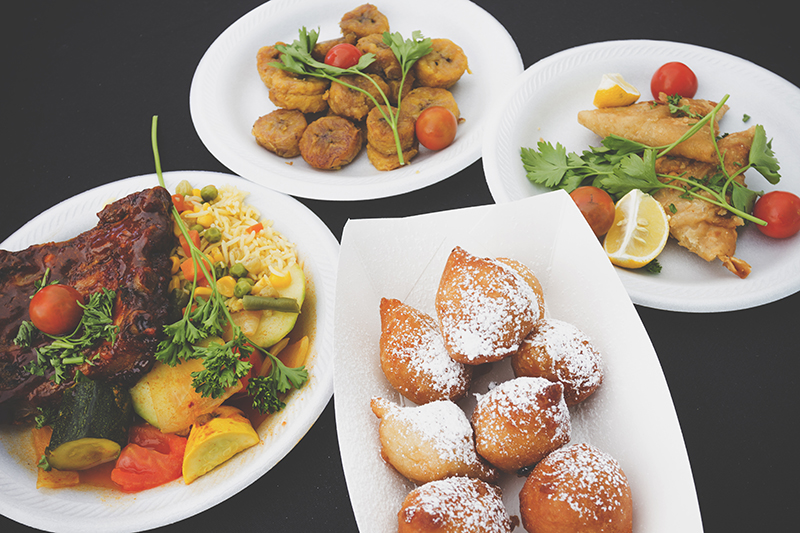 It’s just past 11 a.m., and the sun’s already starting to beat down on the crowd that has converged in Tooele City Park for the city’s annual arts festival. It’s a humble gathering of local artists and craftspeople, but the excitement for one of the city’s favorite traditions has already started to crackle and pop among those in attendance. While I have nothing but respect for the talented locals that offer their handmade products to cheerful festival-goers, I’m here for the food—particularly that of Tooele resident Cathy Tshilombo-Lokemba, otherwise known as Mama Africa. Happy to be participating in a festival that is so close to her home, Mama Africa and her crew are out in full force. Her gigantic mobile grill is already sizzling with a legion of halved chickens and full racks of ribs—as soon as the aroma hits my nose, I feel myself getting weak in the knees.

Originally from the Democratic Republic of the Congo, Tshilombo-Lokemba has seen her fair share of the world. She’s lived and worked in Dallas, NYC, Phoenix and Brussels. With a travel resumé of that magnitude, I couldn’t help but wonder what kept her in Utah for the last 11 years. “I love Utah because it’s a very welcoming state,” Tshilombo-Lokemba says. “In 48 states, I’ve never seen this kind of support. People want to see you succeed.” She originally came to Utah as a fashion and interior designer, but upon realizing that most of the wedding decorations and design were completed by the brides’ families, she decided to draw upon her many years of culinary experience to start a catering business. Having made a name for herself with her famous Pili Pili hot sauce, she was able to open an African market with help from Salt Lake’s Spice Kitchen, an incubator for local culinary talent. Tshilombo-Lokemba’s cooking experience began when she was 9 years old, and her experiences traveling the world have helped her develop a cooking style that blends traditional African cuisine with that of French Creole, both of which are powerhouses when it comes to bold and exciting flavors. “I switched to catering because I found out that Americans love to eat, and since they can’t all travel to Africa, I would bring Africa to them,” Tshilombo-Lokemba says.

As I am one of those Americans who loves to eat but doesn’t get many travel opportunities, the chance to dive into Mama Africa’s menu was indeed welcome. After spending an extended period of time with the scents of that deliciously hissing grill tickling my nose, I definitely wanted to get a piece of those ribs. Mama Africa’s Ribs ($12 at Craft Lake City’s DIY Fest) come with a side of rice and fried plantains, and the entire plate is an exercise in uncommon familiarity. At first glance, these ribs looked a lot like the many other barbecue ribs that have crossed my plate, but that’s where the similarity ends. Mama Africa’s sauce was sweet and smoky, but there were notes of cinnamon and ginger along with a slew of others that Tshilombo-Lokemba wasn’t too hasty to mention. While it’s hard to hang out on a plate with such a fine specimen of barbecue, the rice and fried plantains were tasty enough to pull their own weight—the plantains had a surprising pop of sweetness, which I was not expecting.

One of my favorite things about Mama Africa’s menu is the fact that beignets were served right alongside samosas. I’ve long been a proponent of fried dough in all its myriad forms, but being able to get two of my absolute favorites at the same place made me a special kind of happy. The Beignets ($5) were dusted with powdered sugar and were a bit denser and chewier than usual. They’re fried to a summery bronze, and I liked the fact that each beignet had more chew to it—these things let you know that you’re eating a piece of fried gold. On the savorier side of the fried-dough spectrum, Mama Africa’s Samosas ($3 for one; $10 for four) just might be the finest samosas that I’ve ever eaten. Whenever I’ve tried one of these meat- and veggie-filled crispy triangles, I always find myself wanting it to be a little bit more filling. Mama Africa appears to have telepathically heard my criticism, and her samosas are absolutely stuffed. They come served with slices of lemon, which perfectly accentuate the samosa’s earthy flavors.

Considering the effort that it takes to own and operate a mobile eatery like Mama Africa, Tshilombo-Lokemba prepares the kind of food that makes festival-goers appreciate their surroundings. It’s something that attendees of this year’s Craft Lake City DIY Festival will be able to enjoy, come Aug. 7 and 8. As Craft Lake City seeks to empower and showcase those who embody a true DIY spirit, Mama Africa’s culinary style is a perfect fit for the festival. She’s built a successful business by doing what she loves, and she’s used her success to organize other events that celebrate African heritage. It’s evident that Tshilombo-Lokemba has nothing but love for the music, fashion and traditions of African culture, but it’s her food that helps bring all walks of life together. “Food travels,” she says, “but it speaks all languages.”