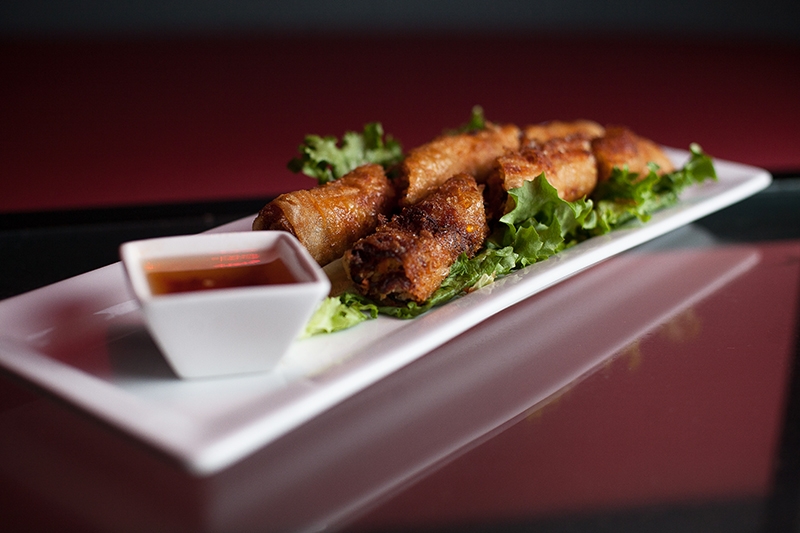 Pipa’s Crispy Summer Rolls are char-grilled to give them an extra crunch, bursting with flavor.
Photo: Garrett Allen

Pipa: Asian Small Plates on the West Side

118 N. 900 W.
Salt Lake City, Utah 84116
801.326.3639
Mon. – Thu.: 4 p.m. – 10 p.m.
Fri. – Sat.: 4 p.m. – 11 p.m.
After living in the heart of Downtown for over a decade, recent circumstances allowed me to buy a house in the northwestern Salt Lake neighborhood of Rose Park. It’s an older neighborhood with deep roots, and with the arrival of the light rail along the North Temple corridor, rumors of a renaissance for the Rose Park and Fair Park neighborhoods have begun to stir. If nothing else, with the dust of construction finally settled, it is now easier to explore the great expanse of North Temple in search of new food haunts.
A recent trip to the Rancho Market plaza on 900 West led me to the unassuming façade of Pipa. From the outside, it isn’t much to look at—another nondescript door in a row of small shops to the right of the market. Stepping inside was an experience in itself. Gone was the supermarket parking lot in a blue-collar neighborhood. My new reality was filled with color-changing neon mood lights and minimalist, black restaurant furniture. The night-club vibe continued with multiple television screens streaming big-titted anime girls and football, a back-lit sake bar and techno remixes of songs made famous by last year’s YouTube pop sensations. This was not at all what I was expecting, but it was the perfect mix of elements for an establishment drawing inspiration from the Tokyo bar scene.
At its heart, Pipa is a tapas restaurant. This can be a strange concept in a place like Utah, where portion size seems inextricably linked to value. For indecisive restaurant goers, though, having the option of ordering multiple dishes to sample and share can be liberating. The first plate to grace our table was the Grilled Asparagus ($5.25). The preparation was spot-on. The asparagus came in bite-size bits, char-grilled to firm perfection. It was served on an oblong plate with a scoop of jasmine rice. The understated preparation allowed the natural flavors to shine. We added stir fried beef to ours for an extra $1.50, and the tender meat paired well with the flavorful vegetable. If beef isn’t your thing, you also have the option of adding chicken, tofu or shrimp. I imagine they would all work fairly well and are worth the extra charge.
We were next treated to plates of Potstickers ($5.95) and Cantonese Fried Rice ($7). The potstickers are available in two different varieties—vegetable or pork. They were served on a bed of greens with a traditional gyoza dipping sauce. Potstickers are fairly standard Asian-American fare, and these were exactly as expected—crispy on the outside with a firm meat and ginger filling. There were more than half a dozen on the plate, making it easy to share and feel satisfied. The fried rice was also exceptional. Pipa offers the rice as a straight vegetarian dish or with assorted meat mix-ins. We ordered ours combo style with bits of chopped pork, chicken and whole shrimp. The rice was perfectly tender, the vegetables were crisp and hearty, and the bits of meat were expertly seasoned and appropriately sized for chopsticks. The strength of an Asian restaurant’s fried rice has always been an indicator of whether or not I’ll want to come back. I’ll be back.
The last plate to arrive was our order of Crispy Summer Rolls ($5.50). The two rather large rolls were cut into bite-sized pieces and served on a long, rectangular plate. The danger when ordering Vietnamese-style summer rolls is that they’re often treated as the healthier alternative to deep-fried egg rolls. As such, you sometimes end up with bland vegetables and noodles wrapped in thin rice paper. What intrigued me about Pipa’s take on the classic side was the word “crispy.” We ordered these on the recommendation of our server, and we could not have been happier with what we got. The savory mix of pork, vegetables and rice noodles were wrapped in authentic rice paper and then char-grilled to give them a crunch. They were definitely crispy, bursting with flavor and beyond our expectation. These were easily the best taste and value of the dishes we ordered.
My experience with the menu was limited to a few favorites, but this doesn’t mean that there aren’t more exotic options. They also offer a boneless Siamese Shark Filet ($7.95) steamed in a ginger-soy broth and topped with cucumbers, green onions, cilantro and red bell pepper. The fragrance alone, wafting from an adjoining table, made my mouth water. Another noteworthy dish is the XOXO Noodles ($4.50)—a mixture of fried chow mein and chunky rice noodles served with a spicy garlic XO dipping sauce. I wish I’d had room in my belly to try everything, but the generously-sized small plates took their toll on me rather quickly.
Alongside the great food, there’s also an abundant selection of drinks. If beer is your thing, they’ve got it—from local Utah brews to pan-Asian varieties. They also have a decent wine selection, by the glass or by the bottle. And of course, sake is their strongpoint. Sake and sake-based cocktails make up over half of their drink menu. I cannot imagine a restaurant-goer not enjoying their visit. From an unassuming façade to one of the warmest and trendiest restaurant interiors in the valley, Pipa was full of pleasant surprises for me. We are fortunate to have this incredible Asian gem in the heart of the River District.