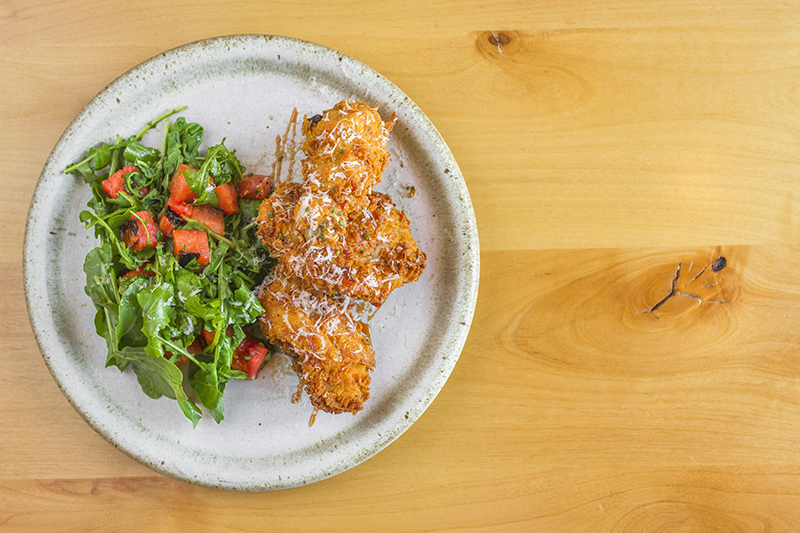 Provisions: For Every Food, There is a Season

In contrast to the seemingly endless road construction on 2300 East, the confines of Provisions are warm and inviting—the orange-and-white color scheme offers an environment that is both comfortable and posh. On warm evenings, I’d recommend taking advantage of their patio seating—its well-manicured horticulture and self-contained charm perfectly complement the eclectic yet familiar menu.

Speaking of which, Provisions owner and executive chef Tyler Stokes cultivates a roster of entrées that rotate on a weekly basis. There are a few mainstays, but Stokes has a penchant for seasonal cooking and sustainable ingredients, so he likes to shuffle things around. Not only does the menu at Provisions offer something new every week, but it’s also geared toward selecting a variety of small plates and larger entrées. I highly recommend getting a group of gastronauts together for a visit—ordering multiple items and sharing them is one of the best parts of eating at Provisions.

The small plates that best showcased Chef Stokes’ reverence for his ingredients were the Crispy Duroc Pig Head Torchon ($11) and the Roasted Corn ($9). Duroc pork is considered to be analogous to black angus beef, and it’s the pork of choice at Provisions. Chef Stokes prepares his torchon with the tender, fatty meat from the head of these pigs and slices it into medallions that are subsequently deep fried. It comes served with a leaf of butter, lettuce and some delicious condiments—the pickled mustard seed, dried cherry ginger compote and crème fraîche are good enough to eat on their own. The Roasted Corn is an unassuming powerhouse of flavor. It arrives hot from the wood-fire oven, and it’s topped with tiny bonito flakes that lazily dance back and forth on the plate. Despite the salty savor of the dried bonito, smoked bacon and miso butter, the corn remains the star of the dish—sweet, crunchy and simple. I had heard great things about the Steamed Buns ($11), a Chinese-inspired offering that was stuffed with pork belly and pickled cucumber. While these were tasty overall, the pork belly was outshined by the pickled cucumber—the opposite of what I was hoping.

Provisions’ large plates are where the work of Chef Stokes really shines. Each entrée arrives beautifully plated, and every ingredient does its respective job admirably. The MVP of the evening was the Organic Buttermilk Fried Chicken ($22), a hefty plate that includes a drumstick, breast and thigh, along with a light salad of mizuna and grilled watermelon. High-end fried chicken is something that a lot of local restaurants do extremely well, but Provisions has left them all behind. Not only do you get a good half of an organic chicken, but it’s also fried in what I have determined to be a mixture of angel tears and leprechaun gold. The chicken itself is tender and juicy, but then you have this outer layer of perfectly golden crunchiness. It’s glazed with red wine vinegar, which gives it a nice acidic kick, and it’s topped with parmesan cheese, because why the hell not?

For something a bit lighter but no less hearty, the Potato Gnocchi ($22) is a rustic take on the most underrated of all pastas. Provisions does their gnocchi right—they’re soft enough to soak up the flavors of sage and black garlic butter and chewy enough to compete with the chantrelle mushrooms. The butter-and-sage mixture melds nicely with the chantrelles, creating this spectacularly earthy gravy that accompanies every bite. This dish exemplifies an Italian classic, but the addition of corn, mushrooms and sage pays homage to American comfort food like pot pies and beef stroganoff.

While it’s just as lovely as the rest of the Provisions menu, the Roasted Bone-In Duroc Pork Chop ($28) wasn’t as consistently tasty as the other dishes that I tried. The pork chop itself was decently huge, and roasting it bone-in imparts a nice smokiness, but the overall flavor wasn’t as rich as I was expecting. I found myself much more impressed with the crispy polenta and apricot compote—though mixing those two components with the pork chop offer up more than enough reason to give this dish a try.

After trying out a multitude of Provisions’ options, it’s difficult to order dessert—but it’s definitely worth it. The two desserts that we tried—Chocolate and Cherries ($9) and Salted Caramel Pudding ($7)—were perfect punctuations to our meal. Their modest portion sizes betrayed the sophisticated arsenal of flavors, and neither of them left us feeling overfed. The Chocolate and Cherries is arranged like a small, chocolate crumb mountain range, capped with buttermilk ice cream and cherry sorbet. Plump candied cherries were hidden within all of that creamy goodness, and the whole dish tastes like a black forest cake that has recently discovered its royal ancestry.

The Salted Caramel Pudding come in a deceptively simple mason jar, topped with whipped crème fraiche and chocolate crumb. It’s the perfect representation of the happy union among salt, caramel and chocolate. The pudding has a rich, silky texture that allows all of that merrymaking to unfold evenly, and its textural contrast with the fluffy, whipped crème fraîche is an absolute pleasure on the tongue.

With its progressive yet familiar menu and fully stocked wine and specialty cocktail offerings, Provisions is a must for anyone looking to broaden their repertoire of local restaurants.