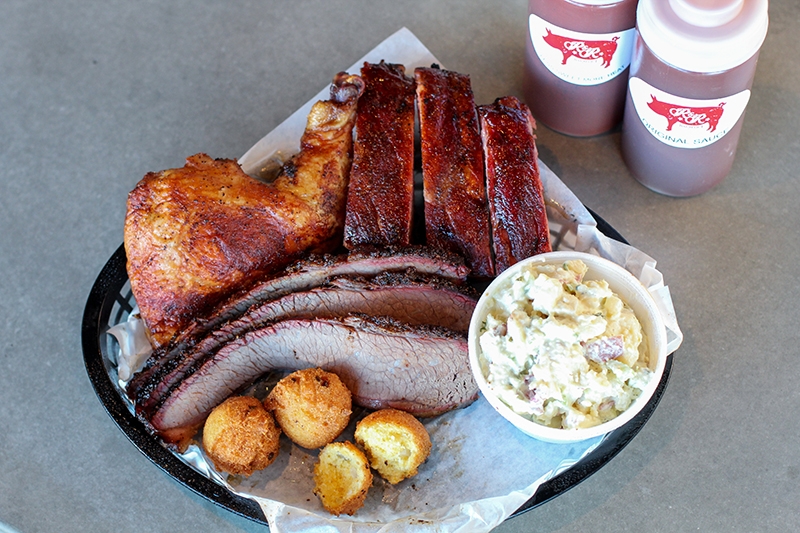 Barbecue has always played by its own rules, which don’t usually coincide with those of most restaurants. It takes no shame in its finger-licking messiness, its closely guarded recipe secrets or its proclivity for gigantic portions. Be that as it may, I was present at KUER’s Savory Salt Lake event last June when R&R Barbecue took home both the Celebrity Judge and the People’s Choice awards—beating out representatives from legit Utah restaurants like Frida Bistro and Tin Angel Café with their smoked brisket tacos. It was a moment that made me stop and take notice.

If you’re on 600 South, it’s not too difficult to find R&R Barbecue. Just roll down the window and let the tantalizing aroma of smoked meats lure you right into the parking lot. It was founded by Rod and Roger Livingston, twins from Huntington Beach, Calif. who have been crushing it on the competitive barbecue circuit. The brothers Livingston have served as Utah’s representatives in several international barbecue competitions, including the Jack Daniels Invitational and the American Royal.
Based on the information that I dug up, I was eager to see what nationally acclaimed barbecue tasted like. I figured that it had something to do with low and slow smoking, and possibly something to do with a sauce that was brewed from a recipe unique to its owners. However, there are things that the folks at R&R have done with their barbecue that I didn’t know were possible. The best way to experience R&R is to sample one of their combination plates. I decided to go for the Three-Meat Plate ($14.99), choosing pork spare ribs, pulled pork and smoked chicken as my personal meat trinity. I faltered a bit as I hefted the generous helping from the counter to my table—the smokiness that rose from my plate was making me slightly weak in the knees. Each table comes equipped with three types of R&R barbecue sauce: original, sweet and hot. After divvying out all three sauce options among my many smoked meats, I started with the pulled pork. My past experience with pulled pork has always been positive—I’d go as far as saying that pulled pork is one of my favorite things to put in a sandwich or a burrito. R&R’s pulled pork has officially ruined me for other varieties. It’s incredibly juicy, and the smoked bark on the outside lacked the charred taste that I’ve had elsewhere. The pork yields perfectly to each bite, and the smoking process brings out the meat’s natural sweetness.
After a few bites of pulled pork, it was time to move on to the ribs. As I was expecting the meat to slide effortlessly off of the bone, I was surprised to find that these ribs had retained the texture of a perfectly cooked pork roast. The meat was toothsome and sweet, and I appreciated the extra effort that I had to put in to eat these bad boys.
Having sampled two of my three meat options, it was time to try the chicken, which is a dish that has disappointed me time and time again. It’s either too dry or it’s too tough—it has never been quite what I was hoping for. Now that I’ve tried R&R’s smoked chicken, I think it’s safe to say that I was right to criticize the ghosts of smoked chickens past. This stuff retained its juiciness, and it shared the silkiness of the pulled pork. Again, the slow smoking process had transformed what is typically a very one-note meat into something very special. Though I was extremely satisfied with this meal, I still needed to revisit the smoked brisket that brought R&R such high praises at Savory Salt Lake. I opted for the sliced Brisket Sandwich ($8.99), which consists of a nice stack of brisket on a bun. Now, I fully endorse this sandwich as is—the brisket is tender, juicy and an overall excellent specimen of smoked beef. When I ordered it, I was given the option to add toppings. It costs a few bucks more, but I got my brisket sandwich topped with coleslaw and pickles. Though this decision was inspired by a slight twinge of guilt that I felt for eating a huge pile of meat without any vegetables, it made for one of the most spectacular sandwich experiences that I’ve ever had—and I have had many phenomenal sandwich experiences. The sweet crunchiness of the pickles, along with the creaminess of the coleslaw, just exploded when paired with that miraculous brisket.
Among the side dishes that I had, there were some definite hits and misses. The Baked Beans ($2.75) tasted suspiciously canned, and the Red Beans with Rice ($2.75) were a bit on the bland side. However, Aunt Libby’s Hush Puppies ($2.99) were delicious, dense and sweet—my favorite side with one of the combination plates. The side dish to end all side dishes was the Onion Rings ($3.75). R&R’s onion rings are beautiful. I think it was the onions that truly made this side dish great. They’re thick—almost too thick, but they taste incredibly clean and sweet.
Based on my dining experience with R&R Barbecue, it’s easy to see why their work has been so widely praised. They’ve effectively carved out their own piece of turf in the world of barbecue, and we’re lucky that they chose to locate that piece of turf here in Utah.