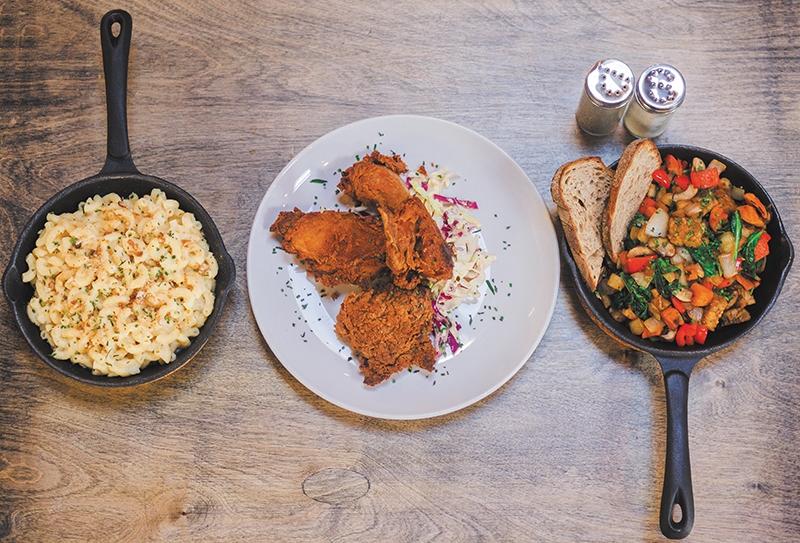 It’s 11:30 on a Thursday night. Your eardrums are buzzing from an ill-advised combination of sonic abuse and alcohol at Urban Lounge. The chances of hooking up with that girl in the skinny jeans were obliterated after she saw you get shoulder checked by an errant mosher and spill beer all over your shirt. You stumble to the street and immediately begin thinking of the terrible morning that is destined to become your reality in the next few hours. Then something unexpected happens: A flurry of aromas drift in your direction—the greasy warmth of fried chicken, the sharp tang of ginger, and somewhere beneath it all … more liquor. These enticing fragrances lead you to the entrance of Rye, the stark, unassuming structure that shares asphalt with Urban Lounge. Inside, you notice people seated at small tables that line the modestly decorated walls, their faces alive with the sensation of comfort food prepared with just the right amount of sophistication. As you are taken to your seat and provided a menu, you slowly realize that this is the moment in which the healing begins.

In less than a year of operation, Rye has quickly established itself as an integral part of Utah’s dining scene—especially among those hankering for a bit of post-concert bread-breaking. It’s owned and operated by Chris Wright, Will Sartain and Lance Saunders, who also own Urban Lounge, Rye’s unruly next-door neighbor. If you happen to dine during a concert, audio and video are considerately piped into the restaurant. Under the leadership of Executive Chef Tommy Nguyen, Rye has been serving Asian-inspired riffs on traditional diner food since May 2014, and it was recently recognized by Salt Lake Magazine as one of Utah’s 25 best restaurants.

Those looking for an early Saturday brunch and those who are more interested in a hip place to take a dinner date will be equally satisfied. The breakfast menu offers choices that are both familiar and unconventional. The Buttermilk Pancakes ($7) are fluffy slabs of goodness—the kind of pancakes that consume the whole plate with their sheer size. While golden brown on the outside, their inner texture is more like that of an eggier German pancake. I recommend splitting an order of these lovelies after sampling the savory breakfast options, such as the Vegan Hash ($9). When an eatery offers vegan food that sticks to your bones, it’s a safe bet that they know what they’re doing. The Vegan Hash is a prime example of this. It’s a hot skillet filled with russet potatoes, sweet potatoes and tempeh—hearty soybean patties that have been diced and roasted along with the other ingredients. A dose of Sriracha makes this dish sing, and the rye toast is excellent for mopping up the bottom of the skillet.

For dinner at Rye, the Teres Major Steak with Fries ($18) is a great place to start. It’s a cut of steak that compares to the tenderloin as far as flavor and tenderness, and it comes with a generous pat of thyme-garlic butter that merges beautifully with the steak’s natural flavors. Where most steak dishes would leave the fries as an afterthought, this one makes sure that you know what good fries taste like. Rye offers a few different seasoning options for the fries, along with your choice of garlic or spicy aioli. I had my fries dusted with spicy togarashi, a Japanese chili powder that offered the right balance of heat and pepper flavor.

In many ways—indeed more ways than I care to admit—I’m still very much a little boy, so the Truffled Mac and Cheese ($8) was an obvious choice. These gooey noodles come served in a cast-iron skillet topped with golden breadcrumbs and truffle oil, making the dish glow like two teenagers sharing their first kiss. The Swiss cheese flavor took a back seat to that of the butter, making this dish feel more like buttered noodles than mac and cheese—but it’s delicious nonetheless. Rye’s Shoyu Fried Chicken ($15 for a half, $10 for a quarter) came out of Left Field to become—and I don’t say this lightly—my favorite piece of fried chicken in Utah. Served on a casual bed of coleslaw, the quarter bird comes with a wing and a breast. The wing offers diners that flavorful, bone-in dark meat, while the boneless breast provides the tender white meat. And that breading—it’s super crunchy but yields perfectly to the juicy meat inside. There’s just enough of the sweet shoyu marinade to cut through the buttery richness of the skin, and the slaw provides an excellent receptacle for those small morsels that fall off the bone during the dining process.

As you gently wipe your mouth and await the check, you lean back in your chair, flush with the satisfaction of conquering an otherwise awful night. With your belly full of food that has been prepared with an appreciation of local ingredients and local nightlife, you let the last of your shame and embarrassment fall to the floor and decide to stick around for dessert. You’ve earned it.