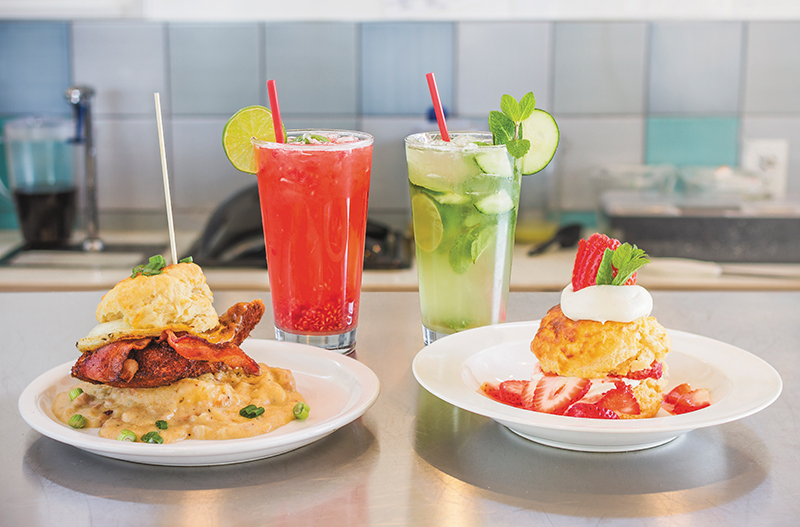 Since Sweet Lake has been a staple of mine every year that I go to the farmer’s market, I was excited to learn that owners Hasen Cone and Teri Rosquist have expanded their operation into a brick-and-mortar store and included biscuits on their menu. The result is something special, refreshing and crowded.

There are many things that make Sweet Lake ideal for a brunch outing, but the best thing about their menu is that it caters to all. Those who are looking for something a bit lighter would be very satisfied with the Biscuit Bar ($6). The Biscuit Bar comes in sweet and savory variations: two biscuits either served with homemade strawberry jam and honey or slathered in Sweet Lake’s mushroom or sausage gravy. It’s probably the best way to get a good look at the foundation of Sweet Lake’s menu. Some biscuits are fragile and flaky, but that’s not how Sweet Lake rolls—these things have to provide structural integrity to some of the most epic sandwiches that I’ve ever seen, but we’ll get to those in a moment.

The biscuits at Sweet Lake have an exterior crust that is golden brown and slightly crispy, while their interior remains soft and chewy. Even after repeat visits, the house biscuits stand on their own as sterling representatives of Sweet Lake’s culinary prowess.

For those who are looking for a more diner-inspired version of brunch, look no further than Sweet Lake’s arsenal of biscuit sandwiches. Not only do these beasts test the boundaries of physical science, but they also demonstrate an uncanny ability to combine textures and flavors into something new and exciting. Any first-timer to Sweet Lake should immediately dive into the Hoss ($10), a breakfast high-rise that manages to include pretty much everything that one wants for an early-morning meal. It consists of one biscuit stuffed with a fried chicken breast, bacon, egg and cheddar cheese. That alone would be delectable enough, but the monster comes served in a generous hot tub of sausage gravy. For an extra two bucks, they’ll add a portion of their Red Quinoa Potato Hash Browns, which completes the diner feel—though they’re by no means necessary.

The first thing that popped into my mind when I saw this pretty little number come to the table was that it was a sandwich worthy of a fork and knife, which is an assessment that I don’t make lightly. The fried chicken was perhaps the most surprising aspect of the Hoss—it’s breaded and fried in the tradition of Japanese katsu chicken instead of the Southern-inspired buttermilk and flour. The chicken skin is lightly crunchy and nutty, and the breast meat remains moist and flavorful—there’s nothing dry happening here. The bacon at Sweet Lake is both firm and tender, striking a nice balance between the crispy and chewy ends of the bacon spectrum. The egg yolk and gravy are luxurious—there’s really no other word for the way all of that savory ebullience brings everything together.

Another powerful contender on Sweet Lake’s sandwich menu is called the Pokey Joe ($9), a take on the pulled pork sandwich. The Pokey Joe is also served between a buttery house biscuit, and the pulled pork comes with homemade slaw and crispy onions. As a side, it comes with a basket of tortilla chips and their limeade salsa. While not as utterly magnificent as the Hoss, the Pokey Joe remains a stalwart comrade to its gravy-slathered brother. The pulled pork is slow-roasted and tender, but it’s the slaw that remains Pokey Joe’s secret weapon—it’s got an acidity level that works with the pork and the biscuit, and its crunchy texture adds a lot to the whole package.

While it can be a bit of a risk to stray from a specialty restaurant’s claim to fame, venturing away from Sweet Lake’s biscuits remains a safe bet. The Conspiracy Cakes ($9) are the most accessible option. It’s a short stack of plate-sized pancakes that are made from home-ground organic wheat. They also come with a fried egg, some of that delicious bacon, and a piece of fried chicken for $4 more. I’m a fan of pancakes that err on the side of fluffy, but I also love it when they have a bit more body—which is exactly what Sweet Lake’s home-ground wheat flour provides.

Any of these offerings go well with Sweet Lake’s famous limeade. It’s all fresh-squeezed onsite and comes in several different variations. My personal favorite was the Habanero Limeade ($4), which spikes their original concoction with a spicy kick of capsaicin heat. All of their limeade comes with a generous helping of pure cane sugar in the bottom of the glass, which sweetens up the tart mixture and adds a nice crunch to every sip—it’s every bit as good as I remember.

Sweet Lake’s comfort-food menu and Southern aesthetic make it the kind of brunch destination that is ideal for those who have slapped brunch with a negative stereotype. It’s the kind of place that is confident in its culinary vision without being arrogant, and it’s that balance that makes it a repeat destination.