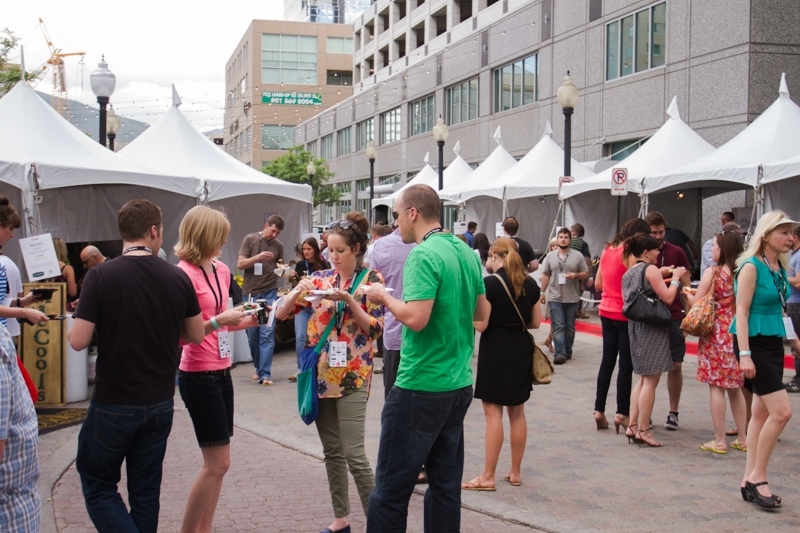 The crowd got more dense as the night progressed, with booths filling up quick with food lovers from all around Utah. Photo: Talyn Sherer

Every year, Salt Lake Magazine kicks off the summer with Tastemakers, a two-night event dedicated to showcasing some of Utah’s finest eateries. With over twenty local restaurants participating, it’s tough to fit so much eating into two nights—but I managed to make it work.

The event’s headquarters were situated on Gallivan Avenue, where around half of the participating restaurants had erected tents and mini-bars which gave attendees easy access to move back and forth among their favorite restaurants. In addition to the pavilion, several restaurants in the Main Street and Second South area had annexed small parts of their establishments for the event, giving attendees the opportunity to experience their unique ambiance and service as they sampled everything from honey-walnut shrimp from J. Wong’s Asian Bistro to crab cakes from Market Street Grill.

Though it was fun to let my nose guide me through the pavilion, there was something charming about spending a warm evening on a culinary scavenger hunt through the heart of Salt Lake City. Bouncing from the swanky, Art Deco environs of The New Yorker to the laid-back, outdoor patio of Caffe Molise was like taking a miniature cross-country road trip—and the walking provided more than enough justification to keep eating.

And there was definitely eating. Not everybody brought their A-game to the event, but those that did managed to pack a monumental amount of flavor and texture into their deceptively small plates. As I think it’s only fair to make the distinction between the restaurants who were cooking on portable grills in slightly rainy weather and those who were able to welcome attendees into their dining rooms, here are the best showings of the Stroll and of the Pavilion.

Best of the Stroll

The New Yorker: Glazed Pork Rib and Asian Slaw
Before I get into how awesome this dish was, I need to gush about the New Yorker’s circa 1960 atmosphere. The perfectly dimmed lights and stained glass arrangements evoked a feeling that I only thought existed in Mad Men—like we were dining in the same place where empires rise and ships are launched. When our server arrived with two unexpectedly huge pork ribs on a bed of Asian noodle slaw, it was almost like they were daring us to compare their dish to the others we had tried thus far. I took the dare, and, as I explained to our waiter, I had a little bit of a moment with those ribs. They were prepared with a five-spice hoisin glaze, bringing a glorious dose of autumnal sweetness to the smoky pork ribs. The Asian slaw was simply tossed with sesame oil, but it provided an excellent foil to the richness of the ribs.

Market Street Grill: Crab Cakes and Tartar Sauce
On paper, crab cakes should be my favorite food of all time—but I’ve never really been impressed with the crab cakes that I’ve tried. I now know that this was because I had not yet had the crab cakes at Market Street Grill. They were huge and didn’t skimp on the crab meat—which was my biggest complaint about the other iterations of this dish that I’ve had. Along with the delicious headliner, the homemade tartar sauce was the right kind of tangy to highlight the crab’s natural flavors.

J. Wong’s Asian Bistro: Honey Glazed Walnut Shrimp
It’s always a special moment when a waiter presents you with a dish of food that looks too beautiful to eat. Such was the case at J. Wong’s when we were served their gorgeous honey-glazed shrimp. Though the honey glaze and candied walnut tasted great, this dish was all about texture. The golden crunch of the fried shrimp along with crispy rice noodles made this offering stand out from the others.

Best of the Pavilion

Texas De Brazil: Churrasco Flank Steak
I used to be a bit of a steak purist. Sure, every so often I’d crumble a little blue cheese on top, but usually I dig my steak au naturale. Then I met chimichurri, a South American condiment made from cilantro, garlic and olive oil, which made my whole steak-eating paradigm shift drastically. Texas De Brazil’s chimichurri made the flavor of their grilled flank steak pop, and the horseradish mashed potatoes were a perfect side dish.

Grand America: Lobster and Shrimp with Key Lime Eclairs
The chefs at Utah’s most recognizable hotel made an impressive entry with shot glasses of chopped lobster and shrimp, mixed with herb aioli and citrus vinaigrette. It was a cool and refreshing bite, but it was the eclairs that caught me off guard. My experience with eclairs has always been fairly one-note, but these little key lime pastries were packed with cool citrus flavor. Paired with the shrimp and lobster shot, the Grand America had assembled a thoughtful package for tonight’s attendees.

Carvers: Crab and Panko Stuffed Shrimp
Perhaps it’s my Utah heritage, but I’m a total sucker for the heavy, cream-based cooking that occupies Mormon kitchens everywhere. Carvers’ Crab and Panko Stuffed Shrimp captured the comforting feeling of this type of cuisine in a surprisingly small package. The panko and crab set it up to be spiked by the light sweetness of the shrimp.

Not only did Tastemakers provide a memorable evening of dining, it reignited my enthusiasm for our fine selection of downtown restaurants. It was great to revisit some old favorites to see what they had planned for the summer, and I also left with a considerable list of new places that now require my further attention.

Check out photos from the event here.