Located along the highly industrial strip just north of downtown, the gastro-pub is close to the city, yet feels miles away from your work week, your problems and the rest of your reality—the perfect bar location, really. Although much attention has been paid in getting the place to look like a rough and tumble roadhouse bar, the warmth and familiarity you feel when you walk inside completely sets your mind at ease. You will keep coming back, for both food and drink. 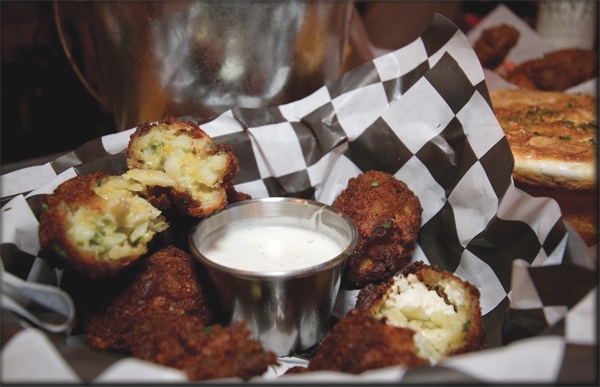 The Garage’s Fried Mormon Funeral Potatoes are the jewel of the starter menu. According to James Bennett, when “paired with Utah ranch dressing, they may inspire you to start going to church again.” Photo: Katie Panzer

Sending SLUG’s Highest Ranking Mormon™ to review a place known mostly as a watering hole was a risky move on the part of the magazine. It is true that The Garage is a great place to get a drink. Located along the highly industrial strip just north of downtown, the gastro-pub is close to the city, yet feels miles away from your work week, your problems and the rest of your reality—the perfect bar location, really. In a former life, before it was purchased and overhauled by the same folks who own Stoneground and Club Jam, it was known as the Jimax Lounge. Though I don’t feel qualified to talk much about the assortment of libations available here, I can say that beer, liquor and even wine flow freely inside, and that its bar status makes the drink, and also the food, exclusive to a 21+ clientele.

As a restaurant, the menu is somewhat limited, but that doesn’t mean it’s cut-rate. As you settle into your barn- wood and corrugated-sheet-metal surroundings, start with one of The Garage’s much-lauded appetizers. The Golden Spike Onion Rings ($6) are thin-sliced and hand-coated in a tempura batter before being fried to crisp perfection. They are complemented well by the pub’s spicy lemon aioli and come by the basketful. Other standard bar fare is available, such as chicken wings, fries, or chips and salsa, but the jewel of the starter menu is the Fried Mormon Funeral Potatoes ($6). These kicked-up tater tots are made in-house by taking shredded potatoes and mixing in cheddar cheese, chopped green onions and bacon. The mixture is then rolled into balls, coated in crushed corn flakes and “baptized” in hot oil. Eaten by themselves, they will take your mind back to Sunday dinners with obscure family members. Paired with Utah ranch dressing, they may inspire you to start going to church again.

On a recent trip, my wife and I went one better and ventured further than the appetizers. Several choices on the entrée menu will also inspire your inner restaurant geek. We split a few entrées, opting first for the Shrimp Po’Boy ($8). This sandwich is made by stuffing a hoagie roll with fried shrimp, lettuce and tomato, and is held together with a slightly spicy remoulade spread. It is served with your choice of side—either fries, cole slaw, baked beans, a salad or cottage cheese. I have a hard time imagining anyone ordering cottage cheese, but our server said it was popular with the ladies. We went for the slaw instead. The sandwich was a good mix of crunchy and smooth, and the slaw was incredible. The dish really brought in the feel and flavors of the gulf coast. We also ordered the Southern Fried Chicken ($9), this time opting for the french fries. The three-piece chicken meal was gargantuan, but that didn’t stop me from trying to down the entire thing. I ran out of steam before I got to the drumstick, amazed at the contrast between the tenderness of the meat and the crunch of the perfectly seasoned skin. As a man raised by Southern parents, I hold fried chicken in high esteem. As such, understand how serious of a compliment it is when I say that The Garage gets my vote for best Southern fried chicken in the valley. Try it with one of the aforementioned sides, or skip the sides altogether and get it paired with waffles (a somewhat trendy dish as of late) for the same price.

The Garage offers several other tempting meals. Their Baked Mac-n-Veggie ($8) is an adult version of macaroni and cheese that is baked until golden brown and then topped with fresh tomato. Is it healthy? Well, no. But it will give your vegetarian buddies something to nosh on, and its rich creaminess is enough to convince even the most stubborn carnivore to go meat free for a night. The other really impressive option is the Philly Cheese Steak. At nine dollars, it is among the priciest selections on the menu, but when you consider the attention to detail, you’ll wonder why it isn’t twice as much. They start with a generous pile of thinly sliced, grilled beef. It can be topped with peppers, onions or mushrooms—depending on your urge—and finished with your choice of American cheese or cheese whiz. The most popular version is topped with onions and whiz. Again, The Garage hits it out of the park with this one—a sandwich worthy of the Philly name. To add even more authenticity, it is served on bread shipped in from the Amoroso Bakery in Philadelphia. Try finding that anywhere else in Salt Lake.

I was impressed by so many things at The Garage: The staff was prompt and courteous, the location was both far removed from the hustle and bustle of our capital city and yet right there in the middle of it. Although much attention has been paid in getting the place to look like a rough and tumble roadhouse bar, the warmth and familiarity you feel when you walk inside completely sets your mind at ease. You will keep coming back, for both food and drink. Even though it’s set against the alien backdrop of a working oil refinery, The Garage still manages to provide all the comforts of home.