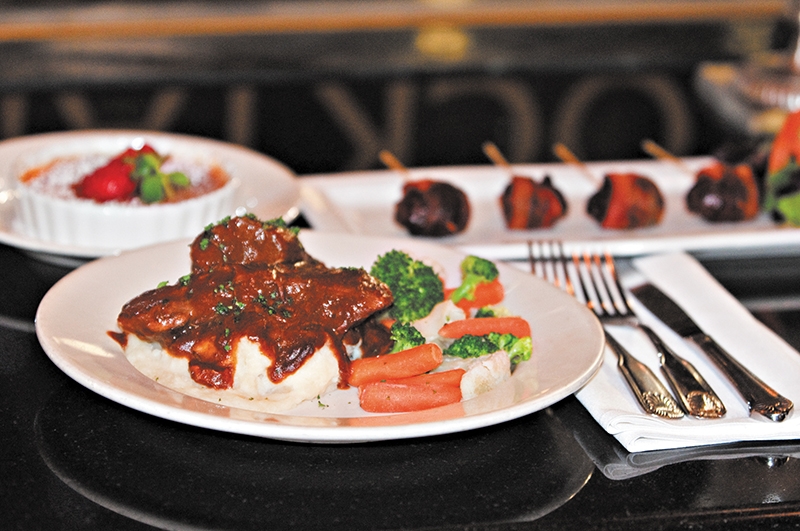 The entire time I’ve lived in Salt Lake City, I’ve watched Downtown restaurants materialize and peak, only to disappear like a flurry of snow on an increasingly warm afternoon. It takes more than just solid food and business acumen to run a successful restaurant. It also seems to take tradition, consistency and a formidable heaping of luck—so rare that you could sell it if you could bottle it. That’s part of what makes Lamb’s Grill such a special place. After almost 96 years of business, the restaurant continues to thrive, adapt and inspire. Lamb’s Grill was the life’s work of George P. Lamb, a Greek immigrant who settled in Logan, Utah, during the first part of the 20th Century. The restaurant was founded in February of 1919. It moved to downtown SLC in 1939 on the ground floor of a newspaper building constructed in 1905. Much of Lamb’s Grill comfortable ambiance is the result of respecting this history. The interior—from the booths and tables to the bar and counter—has been part of the restaurant since the 1930s.

The ownership eventually passed from Lamb to the Speros family before being purchased in 2011 by Francis Liong. The new owner was careful to respect the eatery’s history while concentrating the menu on tastes that were more contemporary, if not still a little Old World. It had been a while since I had visited Lamb’s Grill, and I was eager to give it another try. There are specific menus for different times of the day. We decided to go all in and go for dinner.

The appetizer menu included traditional favorites like steamed mussels, lamb skewers and shrimp cocktail. We eschewed tradition and ordered the Stuffed Bacon Wrapped Dates ($8.25). The quartet of dates were sliced in half, stuffed with bleu cheese and chopped almonds, wrapped in bacon and served piping hot on wooden skewers. They were incredibly rich. The sharpness of the cheese paired well with the sweet fruit. And, like anything else, it was made better with smoky, crisp bacon. It’s hard to imagine a situation where I wouldn’t order these again.

For entrées, we went with Beef Bourguignon ($17.95–$20.50) and Sautéed Calf Liver ($16.50). Before they changed their menu a few years back, they were known for their Beef Stroganoff. Since Bourguignon is essentially a cream-free version of Stroganoff, I figured they would do a good job with it. It was better than I expected. The beef chuck roast was served over mashed potatoes and covered in an opulent red wine gravy. The slow-braised beef was fork tender, flavorful and impossible to consume quickly enough. This dish came with steamed vegetables as well, partly out of tradition and partly to offset the meal’s inherent gluttonous nature.

The Calf Liver was interesting. The lean cut of organ meat was pounded thin and served with mashed potatoes, caramelized onions, bacon and steamed spinach. Liver is high in iron and can have a strong metallic flavor as a result—this is why a calf’s more mild-tasting liver is used in restaurants. It tasted exactly as I expected it to. It was tender and lean with just a hint of an iron aftertaste. The onions and bacon cut the intenseness considerably, and the spinach worked well to level things out. I’m not sure if I ever need to eat liver again, but if you’re a fan of old-style organ meat, you’d be hard pressed to find a place that does it any better.

Other dinner options include an array of pasta, burgers and salads. For those wanting a more substantial dinner, they offer several lamb dishes, bone-in pork chops and grilled steak. Add a soft drink or a selection from their impressive wine, beer and cocktail list, and your night is set.

To finish the evening, we ordered two selections from their dessert menu: their Famous Rice Pudding ($5) and a ramekin of Crème Brûlée ($6). The rice pudding wasn’t overly sweet, and was topped with whipped cream and a dusting of cinnamon. I love rice pudding, especially when it’s served cold, and I loved this take on it. The crème brûlée was the real star of the evening. A thick-but-not-too-thick top layer of caramelized raw sugar shattered when tapped, revealing the cool and creamy treasure below. Walking the line between pastry cream and custard, the vanilla-flavored cream was the perfect texture. I’m an absolute snob when it comes to crème brûlée, and I would eat this every day if given the chance.

There’s no question that Lamb’s Grill is a Utah institution. I’m proud to report that it is still going strong. I find myself wanting to return at different points during the day to try their other menus. I’m sure that quality and value is present in all that they do. And one thing is certain: If they handle breakfast and lunch with the same charm and elegance that they do with dinner, people will still be writing about Lamb’s Grill 96 years from now.