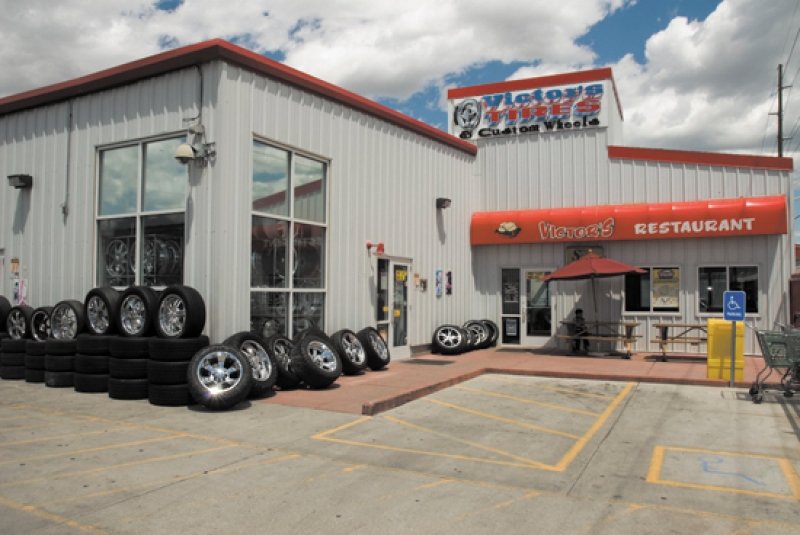 Nothing is worse than being stuck in a waiting room for two hours at lunch time and trying to fill up on Mike and Ikes or rock-hard Skittles.
Photo: Dave DeAustin

First off, I wanted to say thanks to all the people that answered my call a couple of months ago for Mexican restaurants to review after the demise of one of my favorites, La 35. Over the next six months or so, I will be reviewing a few of the suggested places and to start I am going to talk about Victor’s Tires and Custom Wheels on 1406 South and 700 West. I know many of you are thinking to yourself “what the fuck, this Worbon asshole has lost it” and while that may be true it doesn’t change the fact that Victor’s is topping my list of cheap eats right now.

It’s a little confusing at first, going to a tire shop for food, but it makes sense if you think about it. Nothing is worse than being stuck in a waiting room for two hours at lunch time and trying to fill up on Mike and Ikes or rock-hard Skittles while your car is having its tires rotated and balanced, so why not turn the waiting room into a dining area and add a kitchen? That is exactly what Victor Galindo and his wife Elvia did a few years back. Since then the shop is probably better known for its eats than its tires.(Although SLUG’s own Adam Dorobiala informed me that he got a great deal on some tires there too.)

While the café area has its own entrance, it’s best to use the main entrance since the service counter also doubles as the ordering station. There is a large menu board above the doorway into the café in both English and Spanish with pictures to help with the ordering process. The seating area is sparse but clean and has a wall-mounted TV that is usually tuned to some Latino soap opera, good entertainment for even the most gringo of us. It’s similar to most inexpensive lunch cafes: nothing beyond the necessary and a few plastic plants to spruce the place up. Right by the passageway between the tire shop and restaurant is a small window that looks into the kitchen where the food is handed off when it’s ready and where most of the condiments are stored, including some of the best roasted peppers on the planet.

The thing I always heard the most about when people would talk about Victor’s, were the Tamales, and since my first visit I have only ventured away from Victor’s Special ($5.50), two tamales with rice and beans, once to try the Sopes ($4.90) a tasty dish that consisted of beans and salad with your choice of red or green chile and either pork, chicken or beef piled on a circle of fried masa. A buddy of mine swears by the Chile Rellenos ($5.50 for one or $8.50 for two) and I have been told that the Burritos ($5.50) and the Quesadillas ($5.50) are also great. With a shit-ton of other traditional Mexican options to choose from, ranging from Tacos to Flautas, why do I always order the Tamales? It’s because they are nothing short of amazing!

There are more varieties to choose from than I have had a chance to try, including beef or pork with your choice of red or green chile, chicken with red or green chile or mole, cheese, as well as a handful of fruit tamales. These are the kind of Tamales that are rarely found outside of Mexico, or maybe Southern California, served still steaming and fresh from their corn husks, with a soft but firm crust of masa, rich and bursting with the flavor of the corn from which it’s made, and filled with only the most tender of meats. If you only want the Tamales sans rice and beans you can order them individually ($1.25 ea) or by the dozen to go ($12.00). For those of you who might need help reheating them at home, the best method is to steam them using either a steaming rack and pan or by bending a wire coat hanger into the bottom of a stock pot. Just leave them in their husk resting on the rack and simmer water until they are heated clear through. Easy enough for the most stoned of occasions, yet tasty enough to serve to company.

One warning about the tamales is that the selection can get a bit slim by the end of the day, so it is probably best as a lunch option. Don’t worry all you nine-to-fivers with jobs too far away, they are open on the weekends too.