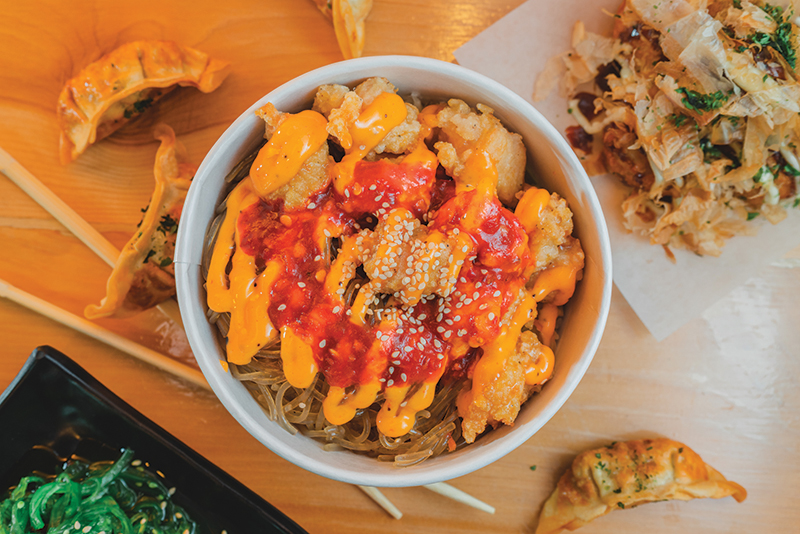 Twist It, Pull It, Cupbop It: Ramen 930 partners with Cupbop to bring together Korean...

As we make ourselves privy to a world of fast-paced eating, food trucks, self-indulgence and instant food gratification through the home delivery apps at hand, Cupbop’s intriguing Korean flare reigns in our city. What they really could have done to spice things up was to partner with a Japanese concept in their already thriving hub on Broadway, Downtown. They did that wonderfully—it’s Ramen 930.

Kangho Lee writes in the U News Writing Article, “Cupbop is a Huge Trend in Utah,” which is about how the thriving CupBop food truck was started by Junghun Song, Jongkun Kim and Jihyung Park in 2013. Since Cupbop is easy to serve and delicious on top of it, Lee describes that Cupbop is the best Korean item to share in the United States—he is quite right.

To be real, anyone who goes outside in Utah has seen either a Cupbop restaurant or food truck in their area—University of Utah students in particular. So what in the actual hell is a Cupbop? Basically, it’s Korean street food made (ideally for students) in large quantities from rice, lettuce, barbecued meat and a bunch of sauce for cheap. It’s in this same reasoning that we started seeing Cupbop trucks showing up on college campuses in the area and spreading into ever-growing storefront locations around the valley. No matter what anyone says, the Downtown location on Broadway is by far the best, as it provides the most competitive quality and includes one of the best ramen restaurants in the state (within affordability).

Walking in, we get this fast casual sense of space, where the walls are covered in Cupbop slang. You order at the counter, and their soda machine provides both blue Powerade and orange Fanta! It’s a rare gem, but if you are able to mix the two of them, you get what is called an “Incredible Hulk,” and refills are allowed. When I go to Cupbop, I always stick with the Ugly Bop ($7.50). As with most of their dishes, it comes with their specialty sweet potato noodles, somewhat sticky rice, fried chicken and the sauces! There are two types of sauces: Most are mayo-based with a heat level ranging from 1–10, with No. 7 clocking in at a whopping average of Sriracha spicy. Remember that we do live in a state where Wonder Bread and Jell-O are the equivalent of a jalapeño. Eaters beware: If you dare the employees, they will make it their sole purpose to destroy your face in hot sauce. Tread lightly with those people.

It still trips me out, though, because I usually frequent Cupbop on Broadway for their partner business, Ramen 930—and this is where I rave. This writer has been to too many a ramen spot, and this is where I take my stand. While many ramen stores oblige tradition by enduringly creating broths for over 48 hours (sometimes), they tend to be extremely heavy on the stomach afterward. To me, it feels like Ramen 930 skims the fat off the top of their brew a little more, just enough to keep a human in walking capacity instead of wanting a nap.

We keep on this lighter note with the Black Garlic Pork Ramen ($10.45). As mentioned, there is subtly filling pork broth that tastes organically made. As they add the black garlic, it feels like it wants to throw off the taste proportions but is revived by the included raw ingredients. Tossing in some Kikurage mushrooms, bean sprouts and green onion into the already steaming pot, the combination seamlessly creates harmony. Sure, these are some of the best ramen noodles in this state, too, but we’re more focused on an over-easy half of an egg that’s been sitting on top of this bowl the whole time. Talk about getting your daily nutrients. Once you start at the top with this one, you’re only working your way down into a meshed fabric of bliss.

Gaining some traction through selling their food at events like Craft Lake City’s DIY Festival, Cupbop’s evolution from food truck to a walk-in restaurant is the kind of trajectory that most small local businesses aspire to have. At this year’s DIY Festival, you can still visit the CupBop truck for the original experience. The elusiveness of Cupbop’s internet dealings does make it a bit tricky to get what the frequent goer wants. To keep it frank, or Bop, the average visiting Utahn is able to fulfill their Cupbop craving by navigating Facebook and Instagram (@cupbop) in order to keep track of where physical locations of restaurants/food trucks are. Go over there and get ’em.